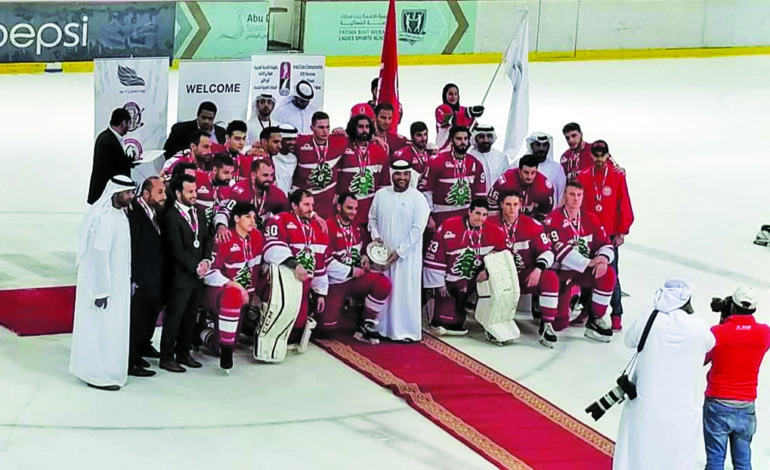 Members of the Lebanese hockey team pose for a group photo after playing a tournament in Abu Dhabi, April 7, 2017 - Photo courtesy of Lebanese Hockey Association

MONTREAL — Lebanon’s men’s national hockey team is in the beginning stages of starting a women’s team.

Tarabah, who was born in Lebanon and holds dual Lebanese-American citizenship, played ice hockey for about eight years after moving from Dearborn to Vermont. She now lives in Philadelphia and sits on the Lebanese Hockey Association’s board.

El-Mir said she’ll have a big role in the women’s hockey team.

“She’s really dedicated,” he said. “We need somebody like her.”

He also said a lot of female players are interested in both North America and Europe.

“We’re going to find a good base, I believe,” he said.

Tarabah said she reached out to the men’s team because of her passion for the sport.

“I personally wanted to bring it to Lebanon,” she said. “I wanted to have a Lebanon women’s team. I figured, why not start one?”

She added that the men’s team has welcomed her.

“They’re inviting me to practice with them until we have a full team,” she said.

The Montreal-based men’s team is only about a year old and still has its own obstacles to overcome.

The men’s team hopes to become accepted into the International Ice Hockey Federation (IIHF) in order to qualify for the World Cup of Hockey, an international ice hockey tournament that started in 1996 and which replaced the Canada Cup. This requires recognition from the Lebanese government and proof that the sponsoring country has at least one ice hockey rink.

“Because of the election in Lebanon, it’s a time issue until the new minister can approve it,” El-Mir said.

He also explained that once the team gets official recognition from Lebanon, it needs one season before it’s accepted into IIHF.

According to El-Mir, players on the men’s team come from all over the world to play. Some are from France and Sweden, while two of the players, Omar Mullan and Christopher Issa, are from Michigan.

El-Mir said the women’s team would be automatically federated with the men’s team once it’s complete.

Tarabah said that the long-term goal for the women’s team would also be to play in international tournaments, qualify for the World Cup of Hockey and possibly, with the right talent, qualify for the Olympics.

“We don’t know if there are many women who qualify that could play ice hockey for Lebanon,” she said. “Lebanon is not an ice hockey country.”

She said that in order to qualify for the team, players must either hold Lebanese citizenship or have a father or grandfather who does.

She added that they need 20-30 people who are decent and willing to commit.

El-Mir said that despite tensions between Muslims and Christians in Lebanon, the team hopes to represent unity.

“We’re really proud to do something for our country,” she said. “It doesn’t matter the religion.

“We want to show that there is no religion,” El-Mir said. “We want to promote peace to Lebanon and tell them there is a way to overcome all this and be united. That we can do something everyone will be proud of.”