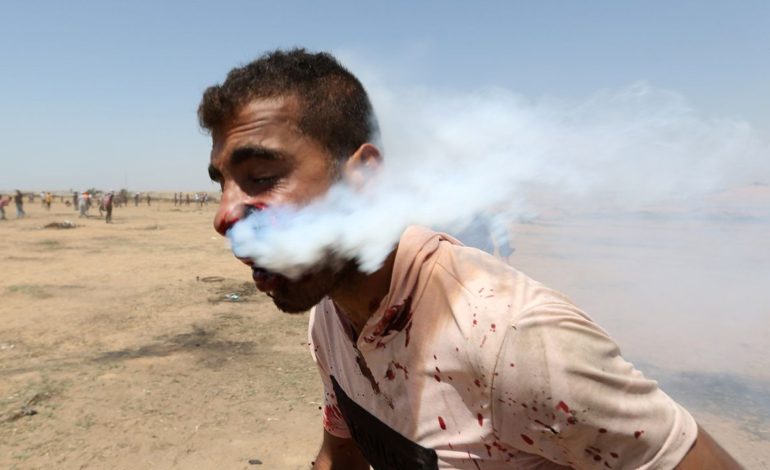 Wounded Palestinian demonstrator reacts as he is hit in the face with a tear gas canister fired by Israeli troops during a protest marking Jerusalem Day, at the Israel-Gaza border Credit: Ibraheem Abu Mustafa/Reuters

GAZA – A Palestinian hit in the face by a tear-gas canister fired by an Israeli soldier, was on life support in a Gaza hospital on Friday.

But the projectile, launched by a soldier on the Israeli side of the frontier, hit Haitham Abu Sabla in the face as he watched Palestinian stone-throwers taking part in demonstrations east of Khan Younis town, witnesses said. As seen in the picture above, the 23-year-old staggered back with the gas-spewing canister embedded in his cheek, his shirt bloodied, before collapsing.

A Gaza hospital official said Abu Sabla was placed on life support after the canister was surgically removed.

Reuters photographer Ibraheem Abu Mustafa, who took the picture, said: “An Israeli soldier came out of a military jeep and fired tear gas bombs … and demonstrators began to run. They began to run further back and there was one of them who had gas coming out of his face. He ran before me directly.

“I started taking photos of him as he ran, before he fell to the ground and medics rushed to help him. It looked scary, a man with smoke and gas coming from inside his face,” he said.

Abu Sabla’s older brother, Mahmoud, said they were both regulars at the protests against Israel launched on March 30 and in which the army has killed at least 123 Palestinians, according to Gaza medics.

“It was a must-go for us. We’ve never missed a Friday,” he said.

Four Palestinians died in the protests on Friday, including a 15-year-old boy, and hundreds were injured – among them an Agence France Presse photographer – by tear gas or live fire fired by Israel soldiers at the Gaza border.

Over 115 Palestinians have been killed by Israeli fire during the near-weekly demonstrations that have been happening since March 30. Protests led by the Islamic militant group that rules Gaza are fueled by frustration over a decade-old Israel-Egyptian blockade, imposed after Hamas seized control there.

Organisers had urged Gaza residents to head to the perimeter fence with Israel for the latest in a series of protests.

The call was issued through mosques and loudspeakers mounted on cars that toured Gaza neighborhoods on Friday.