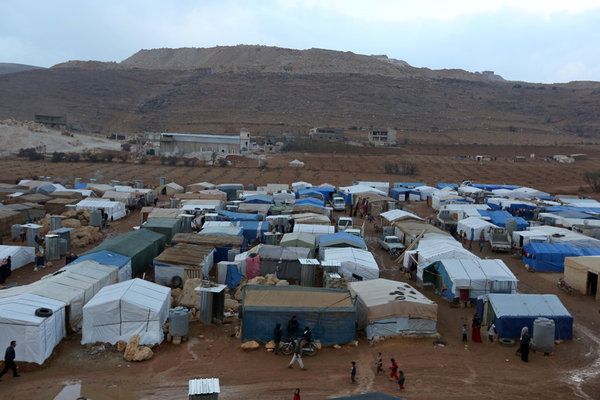 Syrian refugees walk outside their tents at a refugee camp in the eastern Lebanese border town of Arsal, Lebanon, Nov. 18, 2013 - AP

GENEVA/BEIRUT ― The U.N. refugee agency UNHCR hopes the Lebanese foreign ministry will quickly reverse a decision to freeze residency applications the agency has submitted for its staff, its spokesman said on Tuesday.

Foreign Minister Gebran Bassil ordered the freeze last week after accusing UNHCR of hindering the return of refugees to Syria by “spreading fear”.Syrian refugees now account for around a quarter of the population of Lebanon – around 1 million are registered with the United Nations. The Lebanese government wants the refugees to start going home, but the United Nations says it is not yet safe for them to return.

Beirut is working with Damascus to arrange the return of thousands of refugees it says want to go back to Syria, a top Lebanese official said last month.

“We are very concerned about the freezing of the issuing of residence permits to international staff in Lebanon,” UNHCR spokesman Andre Mahecic said during a briefing in Geneva. “We hope that the decision of the foreign ministry will be reversed without delay.”

In Beirut, UNHCR representative Mireille Girard told Reuters 19 staff members had been affected by the freeze on residency permits and that the measure would reduce the agency’s ability to operate.

Lebanese President Michel Aoun has been calling for Syrian refugees to return to areas of the country he has described as secure. Aoun says this should happen before a final political solution to the seven-year-long war.

Last year, more than 11,000 refugees arranged to return themselves to Syria from Lebanon, Mireille said. Some groups have also worked to coordinate their return with the Syrian and Lebanese governments.

A Lebanese Foreign Ministry statement last week accused UNHCR of intimidating refugees into staying in Lebanon by asking them if they were aware of the situation in Syria regarding potential problems they might face upon return.

Mireille said the agency adhered to international standards in working with refugees to ensure they had all the information they needed to return safely and to collect proper documentation that would allow them to return.

“It’s important people make an informed decision about the return,” she said.

A conference on Syria hosted by the European Union and co-chaired by the United Nations in April said conditions remained unsafe.

“We do not oppose or discourage people returning, when they return based on their own decision and based on informed choice,” Mahecic said.

“It is the reality that some people are returning. They are making their decision to go back,” Mahecic said. “We have also in that regard ramped up our assistance inside Syria where we can support those (who return),” he said.

However, fighting has escalated in a number of areas in Syria in the past few months, he added.

“Given the overall situation, we do not believe conditions are conducive to returns,” Mahecic added.