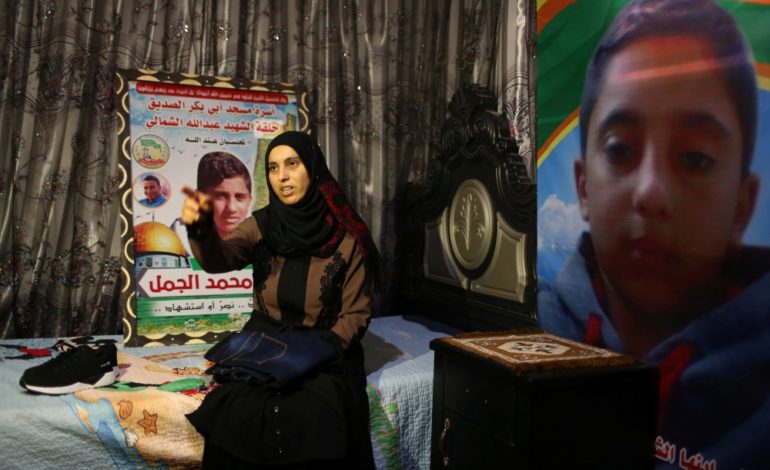 The mother of Palestinian Hiatham Al-Jamal, 15, who was killed during a protest at the Israel-Gaza border, gestures as she shows clothes he bought to wear during Eid al-Fitr holiday, in Rafah in the southern Gaza Strip, June 14 - Reuters

GAZA ― Israel’s killing of at least 125 Palestinians during protests at the Gaza border is casting a shadow in the enclave on its celebration of Eid al-Fitr, the Muslim holiday marking the end of the fasting month of Ramadan.

Economic hardship arising from years of blockades, conflict and internal political rivalries has also darkened the mood in the Hamas-run territory of two million people, where Gaza economists put the unemployment rate at 49.9 percent.

“This is the toughest Eid of my life,” Worod al-Jamal, whose 15-year-old son Haitham was killed by Israeli fire at a protest on June 7, said on Thursday on the eve of the holiday.

She showed reporters the new pair of jeans, shoes and a T-shirt her son bought just two days before his death. Purchasing new children’s clothing is part of the holiday tradition.

Dozens of other families in Gaza are also in mourning this year. Deepening poverty has only compounded a sense of despair.

“The situation is bad … Purchasing power is very weak and sales this year are at their lowest in years,” said Omar al-Bayouk, whose clothing shop, like many others stores in Gaza, was virtually devoid of customers in the run-up to the holiday.

“I bought a pair of shoes but I will only be able to wear one shoe. The other, I will keep at home,” said the teen, whose left leg was amputated after he was wounded by Israeli army gunfire at one of the protests.

Palestinians have been holding mass demonstrations at the border to demand a right of return to what is now Israel not only for those who fled or were forced to flee their homes in the war around Israel’s creation in 1948 but also for millions of descendants.

The U.N. General Assembly condemned Israel on Wednesday for excessive use of force against Palestinian civilians. The United States called the resolution one-sided, saying it did not mention Hamas and accusing the group of initiating the violence.

Israel has said that many of the 125 dead were militants using civilians as human shields and that its army was repelling attacks on the border fence with Gaza.