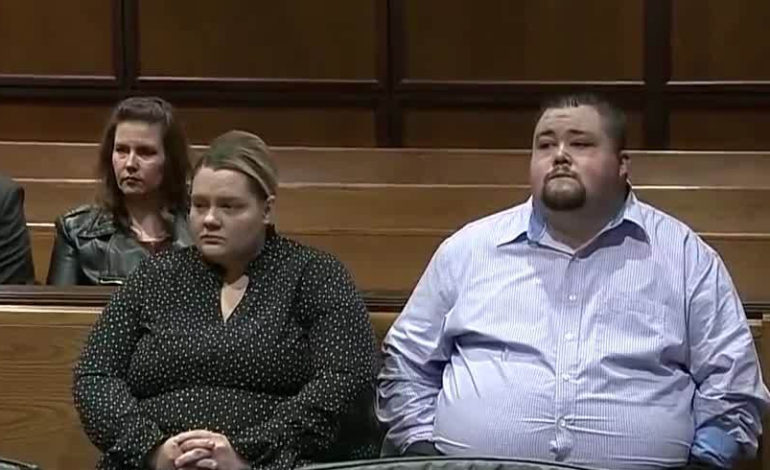 Samantha Eubanks and Timothy Eubanks, both 32, of Dearborn, at their arraignment on Thursday, November 2, 2017.

DETROIT — A Dearborn man whose home-based day care center was the scene of a shooting that wounded two young children pleaded guilty Monday to six counts of second-degree child abuse the day he was to go on trial.

Timothy Eubanks, 33, was charged along with his wife, Samantha Eubanks, 32, in connection with the shooting at the unlicensed day care center.

Timothy Eubanks will be sentenced at 9 a.m. July 10 and could receive up to 10 years in prison for each count. His wife is scheduled to go to trial July 16. Both cases are being heard by Judge Cynthia Hathaway.

The shooting occurred Sept. 27 at the couple’s home in the 3600 block of Harding. Authorities said Timothy Eubanks had left the residence, leaving two unsecured handguns in an upstairs bedroom while “knowing that the guns could endanger the lives (of) his six children.”

The couple’s older children, ages 10, 12 and 15, were at school when the shootings occurred.

Samantha Eubanks allegedly knew the guns were upstairs and that the firearms could pose a danger to the lives of her children. Authorities say she was operating an unlicensed day care with two 3-year-old boys, a 1-year-old boy and three girls, ages 4 months, 1 year and 3 years.

Samantha Eubanks was allegedly on the first floor of the house when she heard a noise upstairs around 10:19 a.m. Sept. 27. She discovered that one of her 3-year-old sons had gone upstairs, found an unsecured handgun in a bedroom and shot a 3-year-old boy in the face and another 3-year-old in the shoulder.

Samantha Eubanks was charged with two counts of second-degree child abuse and two counts of felony firearm in connection with the two 3-year-olds who were shot.

She also was charged with four counts of second-degree child abuse in connection with the children at the home day care who were not shot, plus an additional six counts for allegedly exposing the couple’s own six children to the risks of being harmed because of the loaded firearms in their home.