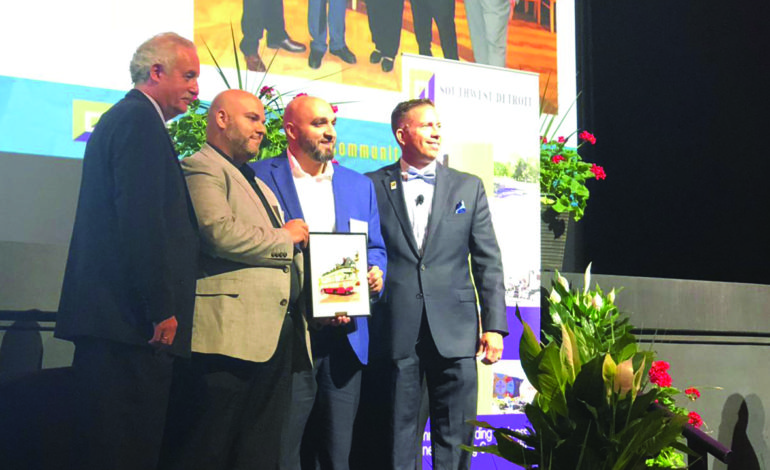 Since its doors opened in 1998 by Khalid Hasan, an immigrant from Jordan, the family-owned business has thrived as a staple for residents of diverse backgrounds and was one of the first businesses in Detroit to get involved in fixing run-down neighborhoods.

On Thursday, June 21, the SDBA hosted more than 300 business owners, community leaders, entrepreneurs and residents during its annual Community Investment Breakfast at the MotorCity Casino Hotel.

At the event, where Ford Land Chairman and CEO David Dubensky delivered the keynote address, local businesses and community leaders who demonstrated a high level of success in making Southwest Detroit a vibrant and growing community were honored with several distinguished awards.

Members of the Hasan family, who reside in Sterling Heights, were recognized for sticking with Detroit since the father immigrated to the U.S. in 1997.

“When things started going slow in Detroit, we decided not to relocate,” Ahmad Hasan, co-owner of the store with his three brothers, told The AANews. “We just tried to find alternative markets, whether wholesaling or targeting new customers of different backgrounds. We’re hoping now with everything [in Detroit] coming back and with the city tuning around, it’ll pay-off.”

Hasan, 34, said Nice Price started out as a modest home goods store in Mexicantown and now includes a gift shop and an Islamic clothing store for women. It’s a prime location that serves as a hub for customers in Detroit and Dearborn and Hasan said they’ve been able to stand out from the rest by diversifying their merchandise to offer cooking ware and other goods that cater to the Latino, Middle Eastern and African American communities.

As Nice Price continues to thrive, so does its neighboring businesses and residents.

For almost a decade, the store has been helping the city provide services, including cleaning up nearby streets, removing graffiti, repaving sidewalks, adding street lights and dispatching extra police patrol during the holidays, through the West Vernor and Springwells Business Improvement District, a program by the SDBA.

In 1957, a group of Southwest Detroit business leaders established the “West Vernor Businessman’s Association” to combat the loss of local customers to suburban malls. Today, the SDBA is a coalition of business owners and community leaders who work alongside investors, entrepreneurs, customers and neighbors to capitalize on Southwest Detroit’s competitive advantage.

Hasan, now vice chair of the business district’s board, said the organization’s member businesses have brought about $1.5 million back into the community since its inception.

“This year’s honorees join the ranks of many widely-recognized community leaders, advocates and organizations who have collectively and positively shaped the Southwest Detroit community through the years,” Rob Dewaelsche, president of the SDBA, said in a statement.