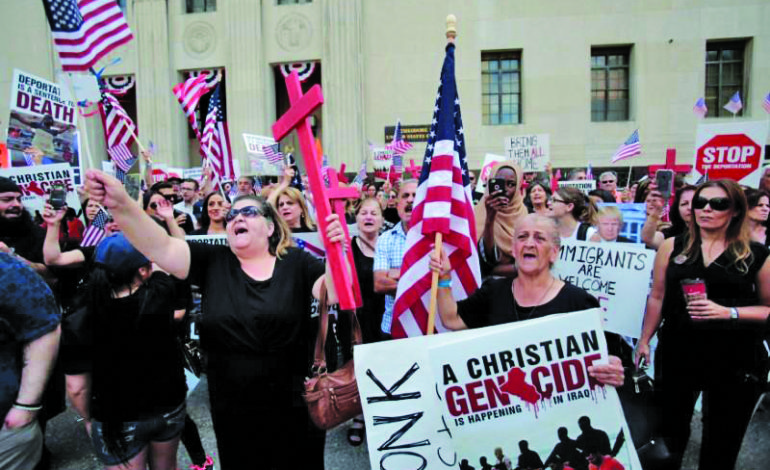 Protesters rally outside the federal court just before a hearing to consider a class-action lawsuit filed on behalf of Iraqi nationals facing deportation, in Detroit, Michigan, June 21, 2017 - Reuters

DETROIT – On Monday, a federal judge ordered Immigration and Customs Enforcement (ICE) agents to stop coercing Iraqi detainees into signing a document giving up their right to be in the U.S. and agreeing to be deported.

The government is trying to send back the mostly Christian detainees, but the ACLU said their return to Iraqi could mean prosecution or death. The civil rights organization filed a class-action lawsuit against the government last June in an effort to freeze the deportation of more than 1,400 Iraqi nationals swept up during ICE raids last summer.

According to the ACLU, more than 100 of the C. 1,400 detainees were from Metro Detroit and about 130 from around the country remain in custody. Many came to the U.S. as children, now have families and have been living and working in the U.S. for decades, but have since been charged with a crime.

Goldsmith issued the emergency order, which also makes it easier for the detainees to speak to their lawyers and permits the ACLU to ask the 33 Iraqis who have signed the papers whether they did so under duress — information it would use to fight their deportation.

“The Court today granted extensive relief designed to stop the abuses and ensure that we can inform our clients of their rights,” Aukerman said in a statement. “We will be able to get into the detention centers to help ensure our clients are not threatened or coerced. And ICE will be required to notify our clients that they cannot be punished just because they refuse to say they want to go to Iraq. It is not a crime to want to stay in America with your family. We are glad that the judge made sure that our clients — and ICE — know that.”

Last summer, Goldsmith stopped the immediate deportation of the hundreds of Iraqis who were arrested on old orders of removal, allowing them an opportunity to have their cases heard by an immigration judge. The lawsuit also won bond hearings for many of the detainees while they fight their immigration cases.