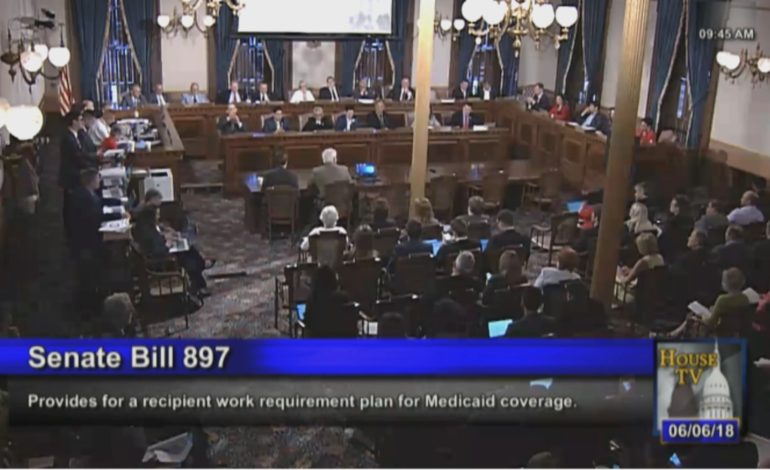 The bill, Senate Bill 897, had previously passed in the State Senate on April 19 and requires “able-bodied” adults enrolled in the Healthy Michigan Plan to fulfill 80 hours of work per month.

Since the bill passed, organizations haven’t stopped efforts to put pressure on Gov. Snyder to veto the bill.

“Until he signs it, we’re going to continue to put pressure on him to veto it and really lift up the major issues we see with the bill,” said Emily Schwarzkopf, policy analyst at the Michigan League for Public Policy (MLPP), a nonpartisan policy institute that addresses poverty.

Schwarzkopf said the bill originally just focused on work requirements, but when it was updated, it had concerning language related to the future of the Healthy Michigan Plan. She said MLPP plans to continue to push back on such legislation, which threatens a plan that has been good for Michiganders.

About 670,000 Michigan residents are a part of the Healthy Michigan Plan extension of Medicaid. “The work requirements portion doesn’t go into effect until 2020,” Schwarzkopf said. “Health and Human Services is going to have a lot of work getting things set up for people to apply for waivers. We’ll be looking at the implementation and how it affects people; kind of getting the word out about changes.”

She said MLPP is now focusing on social media efforts to ask people to call the governor to express their concerns about the bill.

Farah Erzouki, public health coordinator at the ACCESS Community Health and Research Center, said while the bill’s recent updates have been positive, many people could have difficulties gaining an exempt status, even with physical conditions that prevent them from working. Some people may not even understand they qualify for an exemption. The Senate Bill 897 had previously passed in the State Senate on April 19 and Michigan House of Representatives on June 6. It awaits Gov. Rick Snyder signature.

On June 5, the day before the bill passed, ACCESS sent a letter to Gov. Snyder requesting the work requirements not be imposed, stating they would hinder the objectives of the Healthy Michigan Plan.

ACCESS stated in the letter that the loss of coverage would cause uncompensated care at its agency and other clinics and hospitals across the state, ultimately leaving the burden on providers and resulting in deficient services. ACCESS also stated it shared a goal with the state of reducing poverty and increasing the workforce in Michigan, but thinks the way to get there is through job training, affordable child care and transportation.

Asraa Alhawli, an advocacy specialist at ACCESS, said while her job is mainly story collecting and training, she also notifies client of such changes to legislature so they can be prepared for the future.

“Most of them actually don’t know, it’s actually a shock,” Alhawli said.

The letter to Gov. Snyder included personal stories collected by ACCESS’s Navigator program, of clients the center has helped to receive and maintain medical benefits from Medicaid and the Healthy Michigan Plan.

“We’re trying to show the human face of who depends on Medicaid,” Alhawli said. “There’s a stigma behind Medicaid, they have the idea it’s just for old people and people who are lazy, but there are kids, young adults and families who need Medicaid.”

A story included in the letter was that of an ACCESS client, who after losing her son to testicular cancer in 2013, was herself diagnosed with breast cancer in 2015. She was also uninsured.  She had to stop working as a hairdresser in order to fight the disease, but didn’t know how she would afford it. ACCESS helped her sign up for the Healthy Michigan Plan, for which she may not have been able to achieve a work exemption at the time.

She said another client, diagnosed with brain cancer, had picked up shifts at a local bakery in order to be prepared for the new requirements- while undergoing chemotherapy treatments.

Rep. Abdullah Hammoud (D-Dearborn) said he grew up on Medicaid, although his family worked constantly to try to meet their needs.

“The data tells us that wages have stagnated and the family is working two, three jobs to try to make a living wage, a dignified wage that provides them with the means to put enough on the table,” Hammoud said. “It’s not about making more people work, it’s about making sure we have the right jobs out there for families. We need to raise the minimum wage so that individuals can work one or two jobs instead of three or four.

“I think it’s extremely unfortunate that the governor has chosen to back this proposal, given that he originally supported the expansion of Medicaid,” he added. “I don’t have much more to say other than that I’m disappointed. They really avoided addressing all the issues that families need addressed. You’re going to see a lot of families thrown off [the Healthy Michigan Plan.]”