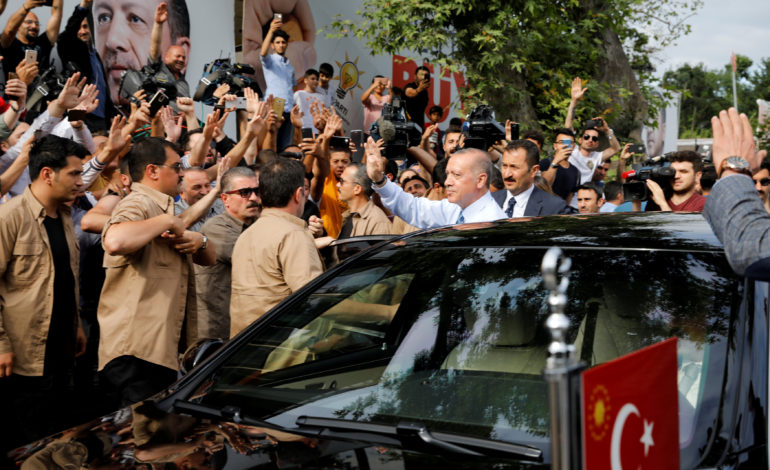 Turkish President Tayyip Erdogan waves to supporters as he leaves his residence in Istanbul, Turkey. - REUTERS

ANKARA – Turkish President Tayyip Erdogan won sweeping new executive powers on Monday after his victory in elections that also saw his Islamist-rooted AK Party and its nationalist allies secure a majority in parliament.

Erdogan’s main rival, Muharrem Ince of the Republican People’s Party (CHP), conceded defeat but branded the elections unjust and said the presidential system that now takes effect was “very dangerous” because it would lead to one-man rule.

A European rights watchdog also said the opposition had faced “unequal conditions”, adding that restrictions on media freedom to cover the elections were accentuated by a continuing state of emergency imposed in Turkey after a failed 2016 coup.

Erdogan, 64, the most popular – yet divisive – leader in modern Turkish history, told jubilant, flag-waving supporters there would be no retreat from his drive to transform Turkey, a NATO member and, at least nominally, a candidate to join the European Union.

He is loved by millions of devoutly Muslim working class Turks for delivering years of stellar economic growth and overseeing the construction of roads, bridges, airports, hospitals and schools.

But his critics, including rights groups, accuse him of destroying the independence of the courts and press freedoms. A crackdown launched after the coup has seen 160,000 people detained, and the state of emergency allows Erdogan to bypass parliament with decrees. He says it will be lifted soon.

Erdogan and the AK Party claimed victory in Sunday’s presidential and parliamentary elections after defeating a revitalized opposition that had looked capable of staging an upset.

“It is out of the question for us to turn back from where we’ve brought our country in terms of democracy and the economy,” Erdogan said on Sunday night.

His victory means he will remain president at least until 2023 – the centenary of the founding of the Turkish republic on the ashes of the Ottoman Empire by Mustafa Kemal Ataturk. Erdogan’s foes accuse him of dismantling Ataturk’s secular legacy by bringing religion back into public life.

Erdogan responds to such criticism by saying he is trying to modernize Turkey and improve religious freedoms.

With virtually all votes counted, Erdogan had 53 percent against Ince’s 31 percent, while in the parliamentary vote the AKP took 42.5 percent and its MHP nationalist allies secured 11 percent, outstripping expectations.

Turkish financial markets initially rallied on hopes of increased political stability as investors had feared deadlock between Erdogan and the opposition, if it had gained control of parliament. However, they then retreated due to concerns about future monetary policy.

The vote ushers in a powerful executive presidency backed by a narrow majority in a 2017 referendum. The office of prime minister will be abolished and Erdogan will be able to issue decrees to form and regulate ministries and remove civil servants, all without parliamentary approval.