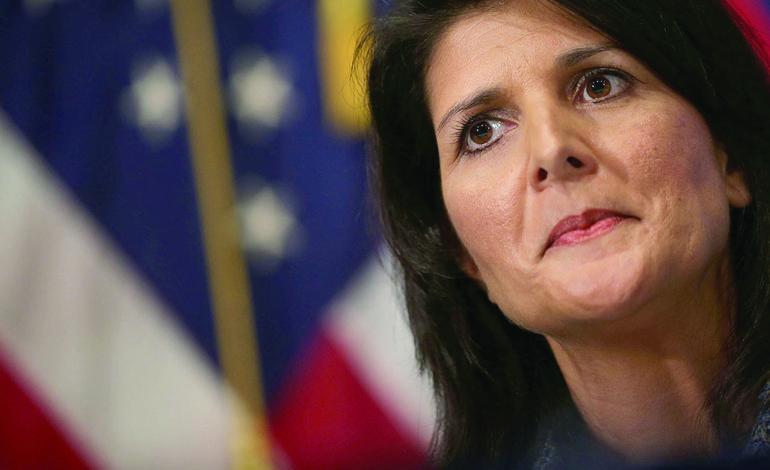 The Trump administration withdrew from the U.N. Human Rights Council on Wednesday, condemning the “hypocrisy” of its 47 member states and its alleged “unrelenting bias” against Israel.

Trump’s ambassador to the U.N., Nikki Haley, traveled to Washington to make the announcement alongside Trump’s top diplomat and former chief spy, Secretary of State Mike Pompeo. National Security Adviser John Bolton didn’t make the party, even though he was there in spirit. Bolton had opposed the Council since its inception when he was U.S. ambassador to the U.N. in 2006, during George W. Bush’s administration.

“For too long, the Human Rights Council has been a protector of human rights abusers and a cesspool of political bias,” Haley said.

She lambasted the Council for “its chronic bias against Israel” and lamented the fact that its membership includes accused human rights abusers such as China, Cuba, Saudi Arabia and Egypt.

“We take this step because our commitment does not allow us to remain a part of a hypocritical and self-serving organization that makes a mockery of human rights,” Haley said.

She said the withdrawal notwithstanding, the U.S. would continue to defend human rights at the United Nations.

The painful truth is the Trump administration doesn’t give a flying fig about human rights inside the country or around the world. It is a fact that China is the biggest trade partner of the U.S. and successive administrations, including the current one, claim that Saudi Arabia is a strategic partner. What’s more, U.S. aid programs grant billions of dollars in taxpayers’ money to countries that have no respect for human rights and are very abusive to both their own citizens and those in neighboring countries.

It is “halal” to take Saudi money and sell them U.S. arms to kill their neighbors and oppress their people, but it’s not “kosher” to sit them around the U.N. Human Rights Council table. However, Haley should be credited for telling the truth about her unconditional love for Israel and utmost hate towards the rest of the world and Palestinians in particular.

It was exactly one week ago that she heard from the world’s body about Israeli atrocities and human rights abuses. The U.N. General Assembly voted overwhelmingly to condemn the recent Israeli massacre of Palestinian demonstrators in Gaza. One hundred and twenty countries voted in favor of the resolution, while Australia, the Marshall Islands, Micronesia, Nauru, the Solomon Islands and Togo joined Israel and the United States in voting against it.

The Israeli forces has killed at least 124 Palestinians and wounded 4,000 more since the Palestinians’ nonviolent Great March of Return protests began in Gaza on March 30.

The resolution asked U.N. Secretary General Antonio Guterres to report back within 60 days on proposals, “on ways and means for ensuring the safety, protection and well-being of the Palestinian civilian population under Israeli occupation, including … recommendations regarding an international protection mechanism.”

In a collective act of defiance toward Washington last December, the United Nations General Assembly voted 128 to 9, with 35 abstentions, for a resolution demanding that the United States rescind its Dec. 6 declaration on Jerusalem, the contested holy city.

Haley never misses an opportunity to display time and time again her despicable, hateful sentiments towards Palestinians, who are literally dying for their human rights and freedom, by spitting on their graves while arrogantly walking out of the world’s stage, snubbing their representative at the U.N.

Haley and her bosses in Washington lost the credibility and the moral authority to speak about human rights. It’s the idiocy of Trump and his heartless warmonger comrades that are making a mockery of freedom and human rights at home as well as abroad.

Since January 2017, this administration has announced its withdrawal from the Paris climate accord, left the U.N. educational and cultural organization, pulled out of the Iran nuclear deal and cut funding for the United Nations Relief and Works Agency (UNRWA). Other contentious moves have included slapping tariffs on steel and aluminum against key trading partners, defying the international community and recognizing Jerusalem as Israel’s capital and moving the U.S. Embassy there from Tel Aviv, a move that further destabilizes an already volatile region.

It is this administration that implemented a heartless, unconscionable policy of separating migrant children from their parents, who’d illegally crossed the southern border into the U.S. seeking asylum.

The leaked news footage of migrant children crying for their parents while living in wire mesh cages under the guns of U.S. Customs and Border Protection (CBP) agents swept the world with anger and disgust, wondering what had happened to the America that was once called the land of the free and the home of the brave.

A group of 12 organizations, including Save the Children, Freedom House and the United Nations Association-USA, said there were “legitimate concerns” about the Council’s shortcomings, but that none of them warranted a U.S. exit.

“This decision is counterproductive to American national security and foreign policy interests and will make it more difficult to advance human rights priorities and aid victims of abuse around the world,” the organizations said in a joint statement.

“All Trump seems to care about is defending Israel,” said Kenneth Roth, the executive director of Human Rights Watch.

Only the morally bankrupt Israeli Prime Minister Benjamin Netanyahu, who is under investigation for corruption, praised the “courageous” U.S. decision to withdraw from the UNHRC, calling it “an unequivocal statement that enough is enough.”

Meanwhile, wars and other forms of violence and persecution drove worldwide forced displacement to a new high in 2017 for the fifth year in a row. In its annual Global Trends report, released Thursday, UNHCR, the U.N. Refugee Agency, said 68.5 million people were displaced as of the end of 2017. Among them were 16.2 million people who became displaced during 2017 itself, either for the first time or repeatedly – indicating a huge number of people are very desperate and on the move, which is equivalent to 44,500 people being displaced each day, or a person becoming displaced every two seconds.

Haley, Pompeo, Bolton and Trump should know that humanity should come first for America to stay FIRST.