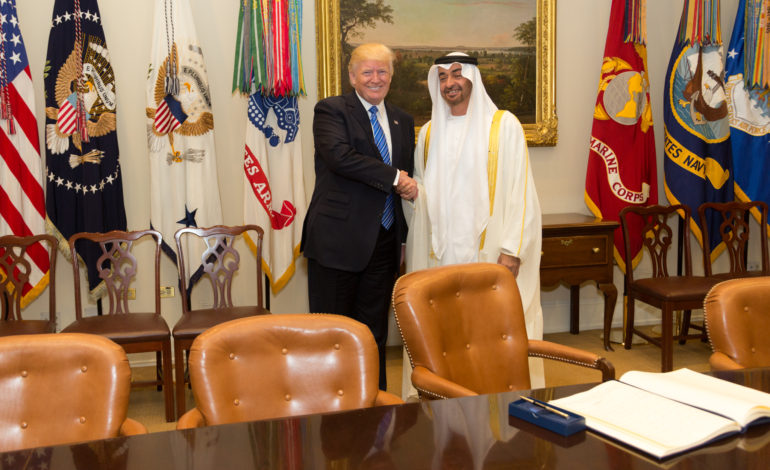 President Trump meets with Mohamed bin Zayed Al Nahyan, crown prince of Abu Dhabi, at the White House in Washington on May 15, 2017. The White House Flickr

Collaboration between Israeli Prime Minister Benjamin Netanyahu and United Arab Emirates officials started secretly in a Cyprus meeting to discuss the Iran nuclear agreement right before Donald Trump took office as U.S. president, according to a report in The New Yorker.

The Obama administration was not aware of the meeting. U.S. intelligence agencies learned of it, as well as of phone calls between senior UAE and Israeli leaders, toward the end of Obama’s second term.

This meeting marked a strengthening of the covert relationship between Israel and some Gulf Arab states that is likely to come at the expense of Palestinians. Netanyahu hopes these Arab states will help press Palestinians to accept a peace deal tailor-made to Israel’s demands.

By 2015, according to the report, “Netanyahu no longer cared what Obama thought of him”, and with a new administration approaching, both Netanyahu and the crown prince of Abu Dhabi, Mohamed bin Zayed Al Nahyan, set their “sights on persuading the new president to create an entirely new dynamic in the Middle East” that would isolate Iran, Adam Entous reported for The New Yorker.

Abu Dhabi is the most politically influential state in the United Arab Emirates.

Before the 2016 U.S. presidential election, Netanyahu met Democratic candidate Hillary Clinton and outlined a plan, “calling for the Arab states to take steps toward recognizing Israel, in exchange for Israel improving the lives of the Palestinians.”

Entous added that, “Clinton knew that the UAE and Saudi Arabia were already working together behind the scenes with Mossad to counter Iranian influence.”

A former Trump adviser told Entous that “the germ of the idea” of a Gulf-Israel alliance against Iran “started in that room.”

Bin Salman: Israel’s never attacked us and we share a common enemy: Iran

Bin Zayed also met Kushner, Bannon and former U.S. national security adviser Michael Flynn on December 15, 2016, months after Netanyahu and Dermer met with Trump, Kushner and Bannon to express the same interests. That meeting was also unknown to the Obama administration and was held at the Four Seasons Hotel instead of at Trump Tower in order to avoid attention.

According to Entous, Bannon later told Emirates ambassador Yousef Al Otaiba that the meeting at the Four Seasons Hotel, “was one of the most eye-opening meetings I’ve ever had.” The theft of Jerusalem and the betrayal of the Arabs

For the UAE and the powerful Saudi Crown Prince Mohammed bin Salman, the Palestinian issue is a mere nuisance standing in the way of closer ties with Israel in order to confront Iran.

“Israel’s never attacked us,” and “we share a common enemy,” bin Salman reportedly told U.S. officials in more than one meeting, according to Entous.

Bin Salman was referring to Trump’s so-called deal of the century between Israel and the Palestinians.

According to Entous, Trump’s ambassador to Israel, David Friedman, a former bankruptcy lawyer, has called the planned agreement a “bankruptcy-type deal” for the Palestinians – in other words a liquidation of their rights.

Entous’ article also confirms that some Trump officials are further to the right on the Palestinian issue than even the right wing Israeli government.

When the newly appointed Friedman was being briefed by State Department officials on the humanitarian situation in Gaza, the ambassador reportedly replied, “I just don’t understand. The people who live there are basically Egyptians. Why can’t Egypt take them back?”

The meeting between Netanyahu and senior Emirati leaders in Cyprus was one of numerous secret contacts between Emirati and Israeli officials that Entous traces back to the 1990s, when bin Zayed wanted to buy fighter aircraft from the U.S., but feared Israeli objections to the sale.

Bin Zayed “believed that the Gulf states and Israel shared a common enemy: Iran” and requested that Sandra Charles – a former official in the George H. W. Bush administration who was working for bin Zayed at the time – convey the message about a possible meeting between UAE and Israeli leaders.

As part of Charles’ work in the UAE, her firm provided assistance to Jamal S. Al-Suwaidi, an Emirati academic who was establishing the government-backed Emirates Center for Strategic Studies and Research in 1994. The think tank was established for academic research but later, “became a conduit for contacts with Israel,” Entous wrote.

Charles later arranged a meeting between Al-Suwaidi and Israeli diplomat Jeremy Issacharoff. The meeting was off the record so that the Israelis and the Emiratis could deny it ever happened.

After that meeting, then Israeli Prime Minister Yitzhak Rabin raised no objections to the sale of the American fighter jets to the UAE.

That built a “sense of trust” between Israel and the UAE, former U.S. officials told Entous. Those former officials considered it significant that bin Zayed “did not care” when he learned the fighter jets contained Israeli technology.

Notably, the same strategy that the Emirates used to gain Israeli approval in the 1990s is being implemented by Qatar today.

The Qatari government has been inviting right-wing Americans and key leaders of Israel’s Washington lobby for all-expenses-paid junkets to Doha.

They include the hawkish pro-Israel lawyer Alan Dershowitz and the head of the Zionist Organization of America, Morton Klein.

Influential anti-Palestinian propagandists have returned to the U.S. to sing Qatar’s praises.

Adelson poured tens of millions of dollars into Trump’s campaign after his commitment to move the U.S. embassy to Jerusalem

Adelson poured tens of millions of dollars into Trump’s campaign after he received a commitment that Trump would move the U.S. embassy to Jerusalem if elected.

“Adelson wanted to take the issue of dividing the capital ‘off the table,’” a Trump confidant said. ‘That was the sole issue for him. It was his dream.’”

Al-Khatib warned that these properties are likely to end up in Israel’s hands.

In an interview with Al Jazeera, al-Khatib claimed that during Israel’s 2014 assault on the Gaza Strip, property purchased by Emirati citizens in the Jerusalem neighborhoods of Ein al-Hilweh and Silwan ended up under the control of Israeli settlers.

Dahlan denied the accusations. In a Facebook post, he threatened to sue al-Khatib and Al Jazeera “all over the world” for their lies, adding that those who manage and fund Al Jazeera “spend the happiest times in the hotels of Tel Aviv and Jerusalem with the direct patronage and permission of Qatar’s ruler.”

Dahlan was a central figure in the U.S.-backed plot funded by the United Arab Emirates to arm and train militias to overthrow Hamas after the Islamist resistance group soundly defeated Dahlan’s Fatah faction in Palestinian Authority elections in January 2006.

President George W. Bush, whose administration directly approved the scheme, referred to Dahlan as, “our guy.” Plans went awry, however, when Hamas turned the tables on the plotters, expelling Dahlan and his militias from Gaza in June 2007.

Dahlan escaped to the occupied West Bank city of Ramallah. But he quickly fell out with PA leader and Fatah boss Mahmoud Abbas and, facing charges of corruption and accusations of another coup plot, fled in 2010 to the United Arab Emirates.