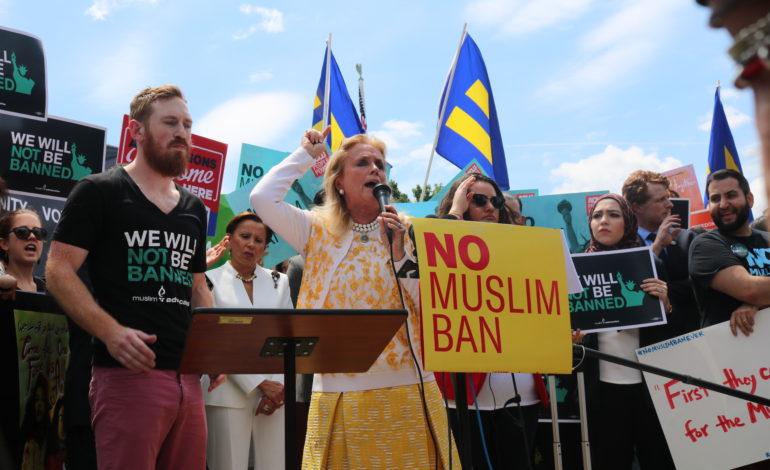 U.S. Rep. Debbie Dingell speaking at a rally against the Muslim Ban

“Today is a sad and disappointing day. From our earliest founding, the United States has been a land of opportunity for individuals seeking religious freedom. Our Constitution and the First Amendment are clear: our country must respect all religions. The Supreme Court made the wrong decision in their interpretation and application of the Constitution.

“The discriminatory Muslim Ban keeps people away from their loved ones and says ‘Do Not Enter’ to refugees fleeing war and violence. National security experts have been clear that the Muslim Ban has made our country less safe. Religious freedom is one of the most fundamental pillars of our Constitution, and this policy is at odds with who we are as a nation. We will continue to fight.

The U.S. Supreme Court on Tuesday handed Donald Trump one of the biggest victories of his presidency, upholding his travel ban targeting several Muslim-majority countries and rejecting the argument that it represented unconstitutional religious discrimination.

The 5-4 ruling, with the court’s five conservatives in the majority, ended a fierce fight in the courts over whether the policy amounted to an unlawful Muslim ban. Trump quickly claimed “profound vindication” after lower courts had blocked his travel ban announced in September, as well as two prior versions, in legal challenges brought by the state of Hawaii, Washington and others.