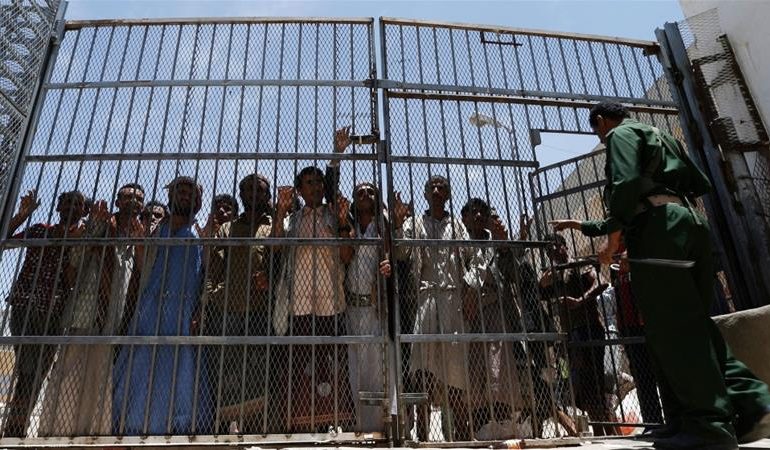 nmates were raped, beaten and threatened with dogs according to the investigation -Reuters

Hundreds of Yemeni prisoners have been sexually abused at a jail in southern Yemen believed to be run by the United Arab Emirates, according to several witnesses.

The men screamed and wept. Those who resisted were threatened by barking dogs and beaten until they bled, witnesses said.

Descriptions of abuse suggest sexual torture is rampant in UAE-controlled prisons in Yemen.

Details of the U.S. ally’s secret prisons and use of torture were exposed by an AP investigation in June of last year. AP has since identified at least five jails where security forces allegedly use sexual torture against prisoners.

When asked last year about claims of human rights abuses committed by the UAE, a Pentagon spokesman said the U.S. had seen no evidence of detainee abuse in Yemen.

American officials have acknowledged that U.S. forces receive intelligence from UAE partners and have participated in interrogations in Yemen. But Rankine-Galloway said he could not comment on intelligence sharing with partners.

UAE officials did not respond to requests for comment from AP.

Witnesses tell Associated Press men were sexually tortured and beaten, and others raped

Emirati forces that are part of the Saudi-led coalition fighting the Houthi group have taken control of swaths of territory in the south of Yemen. Hundreds of men suspected of being al-Qaida or ISIS militants have been held in at least 18 prisons.

Witnesses said Yemeni guards working under the direction of UAE officers have used various methods of sexual torture and humiliation. They allegedly raped detainees while other guards filmed the assaults, and are accused of electrocuting prisoners’ genitals. Witnesses claim guards sexually assaulted others with poles.

“They strip you naked, then tie your hands to a steel pole from the right and the left so you are spread open in front of them. Then the sodomizing starts,” one man said.

Detainees at Beir Ahmed prison smuggled letters and drawings out about the alleged sexual abuse.

This undated photo obtained by The Associated Press shows a drawing of a prisoner being abused at a prison in Yemen run by the United Arab Emirates. Arabic from right to left reads: “Anti-terrorism”, “Innocent citizen” and “Real terrorism behind their back, they don’t look at.” The AP has identified at least five secret prisons run by the UAE, a key U.S. ally, where security forces use sexual torture to brutalize and break inmates. (AP photo)

The prisoner told the Associated Press he was detained last year and has been in three different jails.

“They tortured me without even accusing me of anything,” he said. “Sometimes I wish they would give me a charge, so I can confess and end this pain. The worst thing about it is that I wish for death every day, and I can’t find it.”

The drawings show a man hanging naked from chains while being electrocuted, a prisoner being kicked on the floor while surrounded by dogs and graphic depictions of rape. This undated photo obtained by The Associated Press shows a drawing of prisoners being transported in a pickup truck to an Emirati-run prison in Yemen. The Arabic reads: This is how they transport the prisoners from and to the coalition. Blindfolded and handcuffed in the back of a Land Cruiser pickup in large numbers as if they are animals and under gunpoint. (AP photo)

Of the five prisons where sexual torture is alleged to have taken place, four are in Aden, according to three Yemeni security and military officials who spoke to AP on condition of anonymity. U.S. personnel have been seen at Buriqa base, the headquarters of UAE forces and one of the jails identified, according to two prisoners and two security officials. The detainees could not say whether the Americans were mercenaries or officially working for the U.S..

The war in Yemen began in 2015 when Iranian-backed Houthi rebels took over much of the north of the country, including the capital, Sana’a, and forced out the government of Abd Rabbu Mansour Hadi. The Saudi-led coalition, armed and backed by the U.S., has conducted a bombing campaign in support of Hadi’s government.

The Yemeni government has said it has no control over the UAE-run prisons and Hadi has ordered an investigation into allegations of torture.

In Britain, opposition spokesman Fabian Hamilton called for an investigation by the Saudi-led coalition, the U.S., and the U.N. into what he said were “extremely serious and disturbing allegations.”

“Any form of torture or sexual abuse of prisoners is a clear violation of international law,” the Labor Middle East spokesman said. “If the allegations are proven to be true, those responsible must be held to account by the United Nations and the international community.”