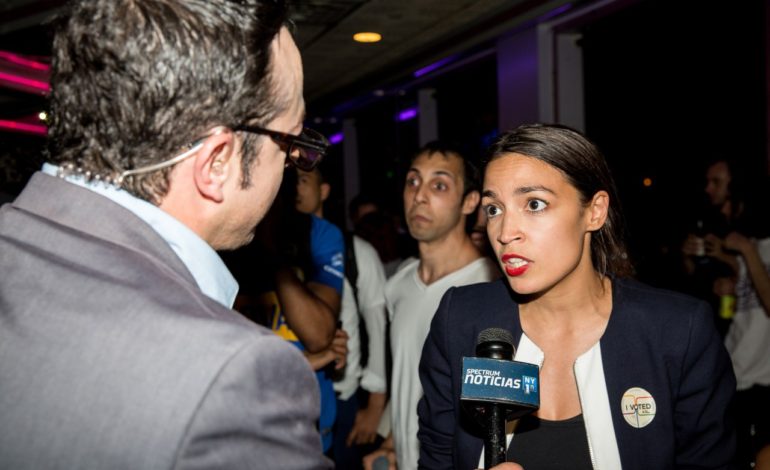 Alexandria Ocasio-Cortez celebrates with supporters at a victory party in the Bronx after defeating incumbent Rep. Joseph Crowly on June 26, New York City - Photo by AFP

She argued that a 50-something White man with close ties to the real estate and pharmaceutical lobbies should no longer be representing one of America’s most ethnically diverse congressional districts.

“We met a machine with a movement,” Ocasio-Cortez said on NY1.

Ocasio-Cortez was born in the Bronx; her mother is from Puerto Rico. She handled foreign affairs and immigration casework for constituents in the district when she worked for the late Sen. Ted Kennedy (D-Mass), in Boston.

After college, Ocasio-Cortez worked for the National Hispanic Institute.

She was an organizer on Sanders’ 2016 presidential bid. PACs linked to Sanders’ bid who supported Ocasio-Cortez included Brand New Congress and Justice Democrats.

Our Revolution, Democracy for America and the New York City Democratic Socialists of America also endorsed her.

She asserted Crowley’s donations from corporate PACs and Wall Street interests make him bound to their corporate interests.

Ocasio-Cortez and Crowley had a clear split on immigration. She was among the first primary candidates in New York to call for the abolition of ICE — which connected her to the heavily immigrant electorate she targeted throughout her campaign. She traveled to El Paso, Texas, to join protests at the child migrant detention facilities as the crisis over separated families at the border unfolded in the closing days of the race. When she visited with voters on Tuesday, many mentioned ICE and expressed their support.

Ocasio-Cortez has strongly condemned Israel’s slaughter of civilians in Gaza. During the race, Ocasio-Cortez often talked about her family’s experience of nearly losing their home to foreclosure. This showed her how the Queens Surrogate Court system works. She said that led her to learn about Queens County machine politics.

Ocasio-Cortez said the Queens power structure forced families like hers into foreclosure with little recourse.

“I started this campaign with a paper bag and a clipboard,” she said Wednesday morning after the win.

New York’s 14th Congressional District straddles Queens and the Bronx and is a melting pot of Latino, South Asian and other minorities.

Out of an estimated total population of 691,715 people, the district was 50 percent Hispanic, 22 percent White, 12 percent Asian and 9 percent Black, according to 2016 Census data.

Actor Cynthia Nixon, who is in her own primary challenge against Gov. Andrew Cuomo, endorsed Ocasio-Cortez on Monday.

“She represents the future of the Democratic Party,” Nixon said. “Alexandria and I are joining together to take on the old boys club, rejecting corporate money and run people-powered campaigns that envision a progressive New York that serves the many, not just the few who can afford to buy influence.”