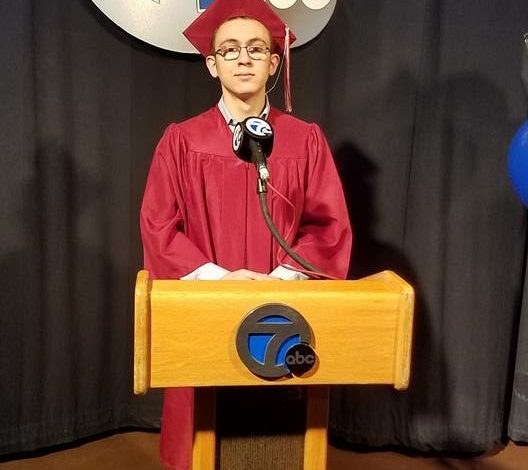 He was among hundreds of students recognized at a special event in May at WXYZ-TV. The event was televised in June.

This was just one of Thabet’s many recognitions of his high achievements during his high school career.

He said his last year of high school was fun, but challenging and that he’d wanted to “step it up.” That included a lot of advanced placement (AP) classes and community involvement in his final semester. He said his online AP environmental science class was his favorite and that it taught him to enjoy independent work.

He also said that Daniel Neil, his AP biology teacher during his sophomore year, was one of his most influential teachers at Southgate Anderson high.

“I think he really challenged me the most,” Thabet said. “He wanted me to take the next step and really push my education.”

Thabet has been accepted to and plans to attend the University of Michigan, where he received the HAIL scholarship, for a pre-medical biology program.

“I’ve always wanted to [be a doctor] since I was a little kid,” he said. “It’s a way to really both satisfy how I love science and a way to be compassionate towards people.”

He said a number of his friends from Southgate will also be attending U of M and he’s excited to have them there with him, as well as some fellow honorees he met at WXYZ’s Brightest and Best event.

Thabet is the son of Syrian immigrants, Khalil and Majed Thabet. He said his parents’ experience as immigrants have attributed to his educational drive and gave him his cultural identity both as a Syrian and an American.

“Their hard work and effort, and their encouragement to put your best foot forward with everything you do, I definitely got that from them,” he said. “I’m proud of where I am and I’m excited for this next trip in my future.”