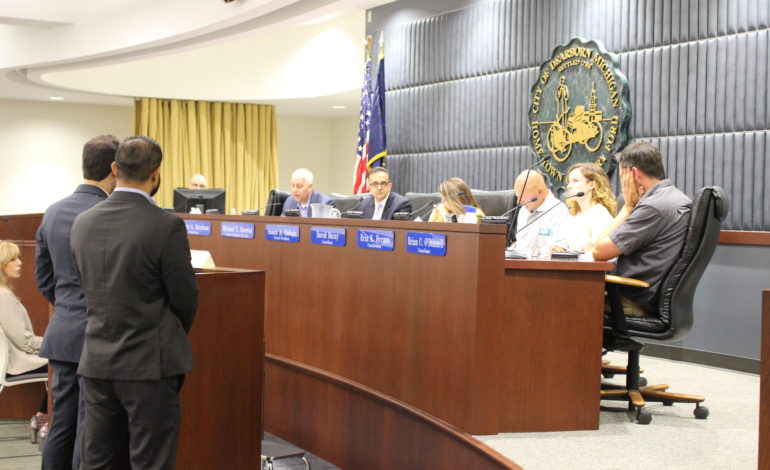 The co-owner of 360 Lounge & Grille and his attorney answer questions from the Dearborn City Council, June 27 - Photo by The AANews

CORRECTION: Although its unfortunate to make errors in a story, The AANews cares deeply about reporting the facts and issue corrections when necessary.
This article has been updated to attribute quotes to the names of two current City Council members, instead of members who left the Council earlier this year.
An earlier version also stated that there was one shooting at 360 Lounge and Grille’s parking lot that left behind 13 bullet casings. The AANews did not receive the police report documenting two shootings at an overflow parking lot until a few hours after press time. However, we decided it was important to get the story out with the available information gathered from the City Council meeting. We apologize for these errors.

DEARBORN – Another Dearborn business is fending off heat from city officials, becoming the fifth establishment in the area in recent years to face scrutiny for inviting rowdy customers.

On June 27, City Council members held a hearing regarding 360 Lounge & Grille, a popular hookah establishment, to discuss whether to revoke its business smoking license. In the wake of a police investigation and resident complaints about a pattern of loud music, violent and criminal incidents, public intoxication, among other nuisances, the officials charged that the business is a public safety concern.

A few minutes before closing time on April 22, a customer fired 13 gun rounds at customers in the lounge’s parking lot, but no one was hit or injured, according a police report obtained by The AANews. Two weeks before that on April 7, police found two bullet casings at the lounge’s overflow parking that we’re fired around 3 a.m.

However, while its owners acknowledge some issues need to be addressed, they said they are taking the heat for neighboring bad businesses and have listed the property for sale.

The hearing culminated in a close vote to keep 360 Lounge & Grille open, if the owners agree to certain conditions the Council proposed by July 30.

In order to stay open, the lounge is required to employ four security guards who also monitor the business’ and adjacent city-owned parking lots, prohibit anyone from entering with an open container, install security additional cameras by Monday, update a sign warning against parking after a certain time and agree to not hold any promotions, DJs or live music performances beginning immediately.

The hookah lounge will be allowed to operate until its smoking license, which is granted by the city, expires on July 30. Its current owners would have to reapply for a new license if they wish to stay open after that. The Council will hold a second hearing on August 1, unless property is sold.

Clarence Dass, an attorney representing 360 Lounge & Grille, told The AANews after the meeting they were “very happy” that the Council was willing to work with the business to agree on a resolution.

During the hearing, Council President Susan Dabaja said the body isn’t aiming to shut businesses down, but “to ensure that you’re a good business neighbor and that you’re not creating a safety concerns within your location and the city.”

Alluding to the shooting this past spring, Councilman Mike Sareini stressed that the business would bear the responsibility if a patron were to be injured or killed here.

Councilwoman Erin Byrnes reiterated their concerns and said the repeated violence, drug use and public intoxication outside the business was putting adjacent residents and police officers at risk.

She added that city inspectors frequent the business and receive repeat offenses too often, adding she found it difficult to put her trust in the owners’ ability to turn the establishment around without action by the Council.

“Ideally, a local business would be an asset to the community,” Byrnes said. “This business, I could only draw the conclusion that it’s a drain on our resources – from our officers’ to our residents’ energy and time, to our city inspectors as well.”

Both Councilwomen Byrnes and Leslie Herrick said there was a correlation between incidents at the lounge and times when it hosts live entertainment.

Councilman Brian O’Donnell questioned why 360 Lounge & Grille has a tough time keeping trouble out, while similar businesses didn’t. He said the city had worked alongside local businesses in good standing to allow for their doors to be open later during Ramadan, during which no incidents occurred.

“I don’t want to hear a beat about ‘this is because of this location,’” he said. “The reality is we work very hard with business to try to make them as successful as possible. However, when you’re doing absolutely nothing, except for breaking the law, utilizing our resources […] and pocketing the money – that’s not going to work.”

Dabaja pointed out that the Council revoked the license of an America’s Best Value Inn hotel on Michigan Ave. on June 5, “because we thought the hotel owners simply didn’t care about the neighborhood.” A report from the city’s legal department shows about 55 arrests and eight drug overdoses, including four that resulted  in fatalities, were made at the hotel from the beginning of last year to February of this year.

Another business on Michigan Ave., Post Bar, was sold by its owners last summer due to an attempt by the Council to shut it down because of similar frequent incidents.

Taofik Muflahi, co-owner the 360 Lounge & Grille, told the Council that while the establishment brings its fair share of disturbances, most violations it receives are because of a liquor store and strip club on the same street. However, he stressed that the management seeks to correct any problems and take responsibility for patrons’ behavior.

During public comments, neighbors of the lounge mainly attested to its value to the community and spoke of the owners’ good intentions, except for one resident who said she’s come to know the officers’ dispatch number by heart.

Ann Hoffman, who lives on the street behind the lounge’s parking lot, said she’s had to call the police too often because of the loud music and dangerous driving as a product of high traffic. She recalled the night when she was suddenly awakened by the sound of loud shots from an automatic weapon and officers searching for bullet holes at her apartment complex.

Hachem, another resident, said it wouldn’t be fair to solely blame the lounge, especially with a liquor store and a pub next door that also disturb neighbors. They serve alcohol, while 360 Lounge & Grille only serves hookah, he stressed.

Kevin Sears, head of security at 360 Hookah Lounge for about a year, attested to its “family friendly environment” and said no alcohol or drugs are allowed inside the establishment.

He said that the live music adds an edge to the business as it competes with about a dozen other hookah lounges in the area, and that the lounge provides a safe space for 18-year-olds and recent high school graduates, as an alternative to a club or bar.

The shots fired at the parking lot was just a teenager abusing open carry gun laws, he added.

“We’ve never had a fight inside,” Sears said. “I’ve never had to physically throw anyone out of that [lounge].”

However, Walling questioned why neither Sears nor anyone inside called police after securing the doors to lock the shooter out of the building, while a neighbor did. Sears replied that he didn’t have time in the midst of the commotion.

He suggested that having at least one squad car parked outside the business at certain times would deter disorderly behavior.

“We need those squad cars in the neighbors, where people want to feel safe in their homes,” Dabaja quickly responded.

The city offers that service at a cost to business owners, but Council members were skeptical that 360 Lounge’s owners would use it.

The only reason they weren’t arrested was because the department “ran out of marked parked police cars to stop them,” he said. The officer added it wasn’t until an hour later that a squad car was available, because “everyone else was tied up with an arrest or other police runs.”

Another officer involved in the investigation said he saw patrons get past security and enter the lounge, leave shortly afterwards and to the liquor store, then replace orange juice or water bottles with alcohol while they walked back to the lounge.

Muflahi replied that the lounge has not received a violation for alcohol in the business and that no proof was presented that the patrons entered the building with the alcohol.

Some council members, including Robert Abraham, said they believed the lounge’s late-night hours contributed to attraction of so many ill-behaved customers. Abraham added that he would not support the proposal if the lounge closed at midnight, instead of 2 a.m.

Muflahi told The AANews he went in to the hearing looking to solve the problem and show that his business cares about the patrons’ and neighbors’ safety, but cited discriminatory presumptions by some Council members.

“When an officer sits [in the parking lot] for three to four hours, you’re looking for a problem,” he said. “If my business is causing problems for the neighbors, I don’t mind closing it down, but I just want to be treated fairly.”

He added that some Council members are not familiar with the type of businesses he runs and said most of his business happens during the last two hours of the day.

“If I close at 12, it’s the same as telling me to close it for the whole day,” Muflahi said.

Sareini made a motion, supported by Herrick, to uphold the conditions placed on 360 Lounge & Grille, allowing it to remain open for a month. It passed with a 4-3 vote.