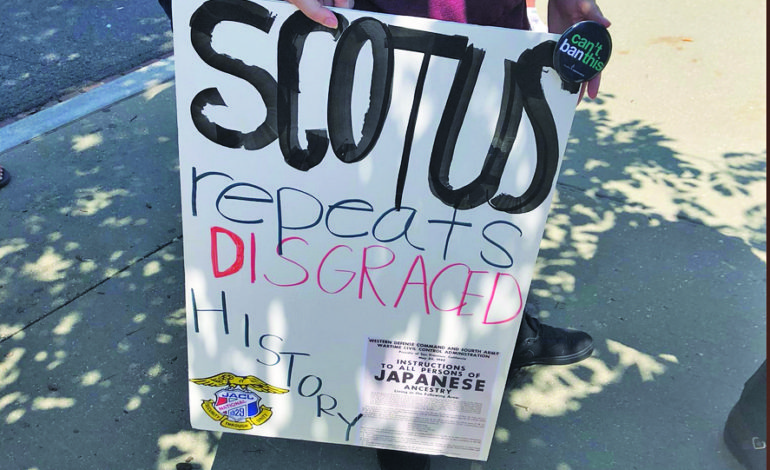 A Japanese American holds sign during a demonstration outside the Supreme Court in Washington, DC on June 26

Tuesday, June 26, 2018 will be remembered as a shameful day in the history of the United States of America. The U.S. Supreme Court upheld President Trump’s executive order banning citizens of Muslim-majority nations from entering the country. The decision fulfilled a campaign promise by then-candidate Donald Trump.

No one can spin this blatant decision to mean otherwise. Even though Trump’s politically and legally savvy advisors tailored the ban in its third version to show that it’s a matter of national security and not targeting people based on their religious beliefs, it was clear why the version of the Travel Ban that reached the Supreme Court had two additional countries that aren’t Muslim-majority— North Korea and Venezuela.

For those familiar with the political reality of the world theater, it’s very obvious that North Koreans aren’t standing in line at the U.S. Embassy in Pyongyang waiting for their visas to migrate to America, and neither are the Venezuelans. It is, however, the Yemenis, Libyans, Syrians and Somalis who are begging for a place to take refuge from wars initiated, fueled, financed and most of the times fought directly by Americans or their regional proxies.

The Trump administration argued and the Supreme Court, in a 5-4 decision, agreed that people (mainly Muslims) from these nations posed a national security threat; yet America continues to fight— directly and indirectly— in these nations, destroying their infrastructure and killing their people, rendering millions of  them displaced and scrambling for a place to seek refuge.

In Yemen, Syria and Libya hundreds of thousands have been killed or injured and millions have been displaced mainly because of a reckless American policy of intrusion. In fact, as Trump and the highest court of the land decide to prevent Syrians from entering the U.S., American troops and military jets in Syria, uninvited and unwelcomed, bomb cities and villages, killing and displacing Syrians. The same is true in Yemen and Libya. In Yemen, the Trump administration continues to sell the oil-rich Saudis the most sophisticated American weaponry and provide them with the intelligence they use to kill Yemeni civilians and destroy Yemen’s already fragile and poor infrastructure, violating the Arms Export Control Act of 1976 that requires international governments receiving weapons from the United States to use the armaments only for legitimate self-defense. It is about Muslims and not about the national security

Writing for the court, Chief Justice John Roberts said that Trump’s administration “has set forth a sufficient national security justification” for the policy to prevail. “The actions taken by Trump to suspend entry of certain classes of people were well within executive authority and could have been taken by any other president.”

“The United States of America is a nation built upon the promise of religious liberty,” said Justice Sonia Sotomayor, who was steely and unwavering as she spoke for the dissenting four justices. “Our founders honored that core promise by embedding the principle of religious neutrality in the First Amendment.”

She condemned the ban as “harrowing” and “motivated by hostility and animus toward the Muslim faith.”

One of her most striking decisions was to repeat the words of the president himself. Citing more than a dozen instances in which Trump tweeted or issued anti-Muslim sentiments, it was his words, not her own, that rang out from the bench.

“On Dec. 21, 2016, President-elect Trump was asked whether he would ‘rethink’ his previous ‘plans to create a Muslim registry or ban Muslim immigration,'” Sotomayor said. “He replied: ‘You know my plans. All along, I’ve proven to be right.’

“‘People, the lawyers and the courts can call it whatever they want, but I am calling it what we need and what it is, a TRAVEL BAN!'” she read, recounting the president’s 2017 tweet.

“Islam hates us,” she read, citing another example, and added another: “We’re having problems with Muslims coming into the country.”

She continued that Trump had never disavowed any of his statements regarding Islam and thus had failed, “to correct the reasonable perception of his apparent hostility toward the Islamic faith.”

In another powerful passage, Sotomayor drew parallels between the decision and Korematsu v. United States, the 1944 ruling that upheld the detention of Japanese Americans during World War II.

She added that “our nation has done much to leave its sordid legacy behind” in the years since Korematsu, but, she reasoned, “it does not make the majority’s decision here acceptable or right.

“By blindly accepting the government’s misguided invitation to sanction a discriminatory policy motivated by animosity toward a disfavored group, all in the name of a superficial claim of national security,” she said, “the court redeploys the same dangerous logic underlying Korematsu and merely replaces one ‘gravely wrong’ decision with another.”

Not since key decisions on slavery, segregation in schools and Japanese American incarceration have we seen a decision by the highest court of the land that so clearly fails to protect those most vulnerable to government-led discrimination.