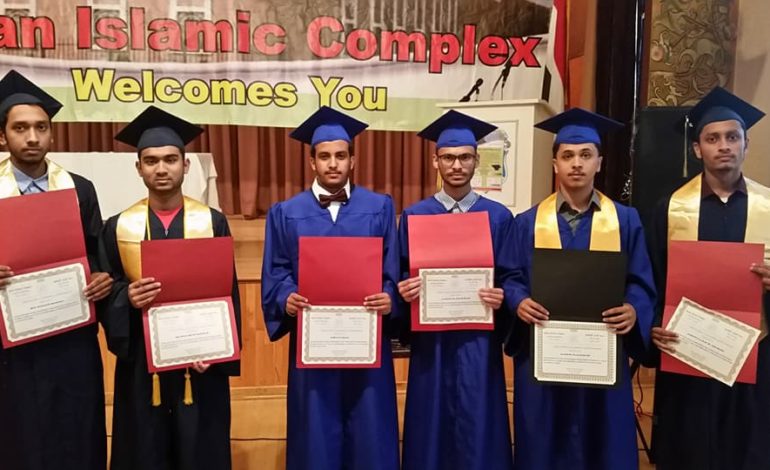 HAMTRAMCK — Mu’ath Bin Jabal Mosque in Detroit is a focal point for the growing population of Yemeni immigrants who live along the border of Hamtramck and Detroit and is located on a social and economically successful avenue that caters to Yemeni Americans and other community members. On June 24, the mosque awarded 12 Yemeni American students the Iman Islamic Complex Scholarship during the 13th annual scholarship awards ceremony on June 24.

A 13th student was not present for the event, which was sponsored by FRD Sav-Mor Pharmacy in Hamtramck.

The event took place at PNA Hall in Hamtramck and was made possible through community sponsors. It included Quran recitation by one of the graduates and remarks by mosque and community members— including the imam of Masjid Mu’ath Bin Jabal, Sheik Abdulrazaq Alsaidi, and Wayne County treasurer Eric R. Sabree— election announcements, motivational remarks and presentations, a student speaker, the awarding ceremony and dinner.

Sabree emphasized the importance of remaining focused on one’s goals and delved into the significance of continually learning.

On behalf of the Iman Islamic Complex,  Abdulrazak welcomed his guests from various mosques, community board members, educators and administrators, city officials and members of charitable organizations to celebrate the youths’ accomplishments.

The imam expressed four main points in his commencement speech: Celebrating the 13th annual ceremony of the youth’s accomplishments; putting a special emphasis towards the educators and administrators who’ve guided the youth towards achieving their goals; encouraging the graduating class of 2018 to achieve their goals and education and to also serve as role models to the community and placing gilded appreciation to the parents who will finally see the results of their dedication to their children.

“One of the most powerful things our mosques could do is to inspire our youth to enhance their knowledge,” Democratic State Senate candidate Abraham Aiyash said in translating the imam’s marks.

The award recipients represented various schools within the districts of Detroit and Hamtramck. Other participants were awarded a certificate of recognition and $50.