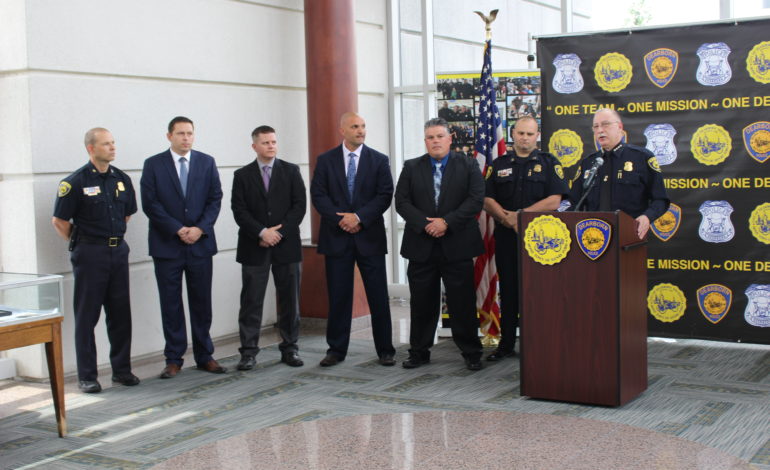 DEARBORN — On June 25, the Dearborn Police Department provided updates on several major crimes that occurred in the city, during a press conference at the Dearborn Administrative Center.
On June 20, three suspects allegedly committed an armed robbery and carjacking of a 32-year-old-male victim. Kimani Waiters, 22, is alleged to have driven the carjacked vehicle away, while Donte Davis, 26 and Marquette Jones, 25, drove away in another vehicle. Wayne County Prosecutor Kym Worthy charged the three in connection with the crime.
A Dearborn officer responded to a call about the stolen vehicle and attempted to stop it, but Waiters drove the vehicle towards the him and fired three to four shots through the windshield. The officer returned one shot. Neither the officer nor Waiters were hit or injured.  Waiters drove away and collided with another police vehicle. He then fled on foot and was later arrested by Dearborn officers who observed him walking in an area near the carjacking. An investigation led to the arrest of Davis and Jones.
Waiters, Davis and Jones have all been charged with a carjacking and armed robbery, in addition to other felony charges.
On June 4, several car jacking occurred near Fairlane Town Center and the John Dingell Transit Center. Shane White, a 31-year-old Taylor resident, was charged with four counts of larceny and habitual offender fourth notice. Detectives found that he stole batteries from multiple vehicles and that he was also responsible for similar thefts the same day in Westland, Taylor and Allen Park.
On May 27, at around 1:30 a.m., a 16-year-old Dearborn resident was found crawling out of the bathroom window of a home on the 15000 block of Prospect St. The suspect was arrested and is facing home invasion charges as a juvenile in the Wayne County Juvenile court.
On May 10, a Wayne County circuit Court judge sentenced Detroit residents Demontae Flannagan, 17, and Kemoni Hayes, 21, to 13 to 30 years in prison, for the murder of Raymond Mshahwar. They plead guilty and are two of five suspects currently in custody.