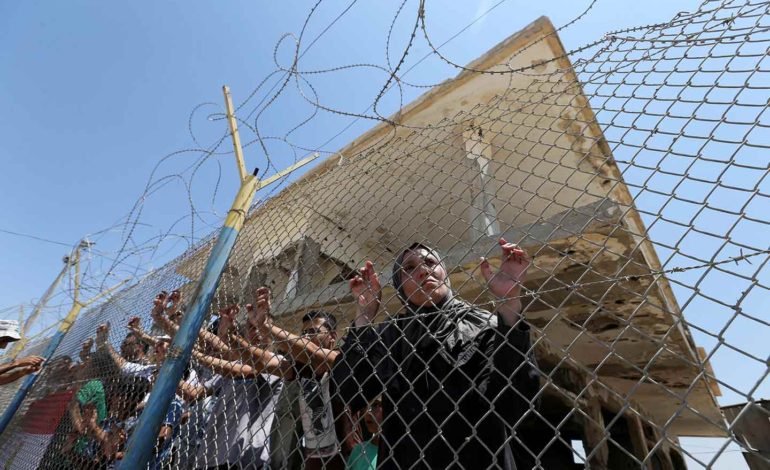 Palestinians gather in front of the gate of Rafah border crossing between Egypt and Gaza during a protest against the blockade calling for reopening of the crossing, in the southern Gaza Strip, July 3, 2017 - Photo by Reuters

This past May, Attorney General Jeff Sessions announced the government’s “zero tolerance” policy at U.S. border crossings. It was a matter of weeks before the new policy began yielding tragic outcomes. Those attempting to unlawfully cross into the  U.S. were subject to federal criminal prosecution, while their children were taken away by federal authorities, which placed them in cage-like facilities.

Expectedly, the policy caused outrage and was eventually reversed. However, many of those who have chastised the administration of President Trump seem willfully ignorant of the fact that Israel has been carrying out far worse practices against Palestinians.

In fact, many within the American ruling classes, whether Republicans or Democrats, have been captivated with the Israeli model for decades. For years,  U.S. pundits have praised, not just Israel’s supposed democracy, but also its security apparatus as an example to be emulated. Following the September 11, 2001 attacks, a renewed  U.S. love affair with Israel’s security tactics blossomed, where Tel Aviv raked billions of American taxpayers’ dollars in the name of helping secure  U.S. borders against perceived threats.

A new, even more appalling chapter in the ongoing cooperation was penned soon after the newly-elected Trump declared his plan to build a “great” wall at the U.S.-Mexico border. Even before Israeli companies jumped on the chance to build Trump’s wall, Israeli Prime Minister Benjamin Netanyahu tweeted approvingly of Trump’s “great idea”, claiming that Israel’s own wall has been a “great success”, for it “has stopped all illegal immigration.”

“Birds of a feather flock together” is an English proverb. Netanyahu and Trump have flocked together for more than a year and a half in perfect harmony. Alas, their personal affinity, opportunistic style of politics and, more alarmingly, ideological meeting points have made matters worse.

In the case of Israel, the word “democracy” is hardly fitting. At best, Israel’s democracy can be described as unique. The “Jewish State’s” former Supreme Court president, Aharon Barak, was quoted as saying that, “Israel is different from other countries. It is not only a democratic state, but also a Jewish state.”

“Israel is a Jewish state,” she said. “It isn’t a state of all its nations. That is, equal rights to all citizens but not equal national rights.”

In order for Israel to preserve its version of “democracy”, it must, in the words of Shaked, “maintain a Jewish majority even at the price of violation of rights.”

Israel spins the concept of democracy in whichever direction would allow it to ensure the dominance of the Jewish majority at the expense of Palestinians, the native inhabitants of the land, whose rising numbers are often seen as a “demographic threat”, a “bomb” even.

Israel, to this day, has no formal constitution. It is governed by what it is known as “Basic Law.” Having no moral code or legal foundation according to which the state’s behavior can be judged, the Israeli parliament (Knesset) is, therefore, free to draft and impose laws targeting Palestinian rights without having to wrangle with such notions as these laws being “constitutionally” challenged.

One of the reasons that Trump’s family separation law at the border failed is that, despite flaws in its democratic system, the U.S. has a constitution and a relatively strong civil society that can utilize the country’s moral and legal codes to challenge atrocious state conduct.

In Israel, however, this is not the case. The government invests much energy and funds to ensure Jewish dominance and to establish physical links between illegal Jewish settlements (built on Palestinian land in defiance of international law) and Israel itself. At the same time, it invests equal resources to ethnically cleanse Palestinians from their own land, while keeping their communities everywhere separated and fragmented.

The sad truth is that what Americans have witnessed at their southern border in the last couple of months is what Palestinians have experienced as a daily reality at the hands of Israel for the last 70 years.

The kind of separation and segregation that Palestinian communities endure goes even beyond the typical outcomes of war, siege and military occupation. It is something that is enshrined in Israeli law, crafted mainly to weaken, even break down the cohesiveness of Palestinian society.

For example, in 2003, the Knesset voted in favor of the “Citizenship and Entry into Israel Law”, which placed severe restrictions on Palestinian citizens of Israel who were applying for family unification. When rights groups challenged the law, their efforts failed as the Israeli Supreme Court ruled, early 2012, in favor of the government.

In 2007, that same law was amended to include spouses from “enemy states” — namely Syria, Iran, Lebanon and Iraq. Unsurprisingly, citizens of some of those “enemy states” were included in Trump’s ban on citizens of mostly Muslim countries from entering the U.S.

It is as if Trump is following an Israeli blueprint, fashioning his decisions around the principles that guided Israeli policies towards the Palestinians for many years.

Even the idea of caging children is an Israeli one, a practice that was exposed by the rights group, the Public Committee against Torture in Israel (PCATI).

The policy, which has allegedly been discontinued, allowed for the placing of Palestinian detainees, including children, in outdoor cages, even during severe winter storms.

The “caging” of Palestinians, however, is an old practice. Today, the Israeli Apartheid wall separates Palestinians from their land and segregates between Arabs and Jews on racial grounds. As for Gaza, the entire Strip, which hosts 2 million people, mostly refugees, has been turned into a massive “open air prison” of walls and trenches.

While many Americans are relieved by Trump’s decision to end the practice of family separation at the border,  U.S. politicians and media are oblivious to the fate of Palestinians who have endured horrific forms of separation for many years. Even more troubling is the fact that many among Republicans and Democrats see Israel, not as a liability to real democracy, but as a shining example to be followed.