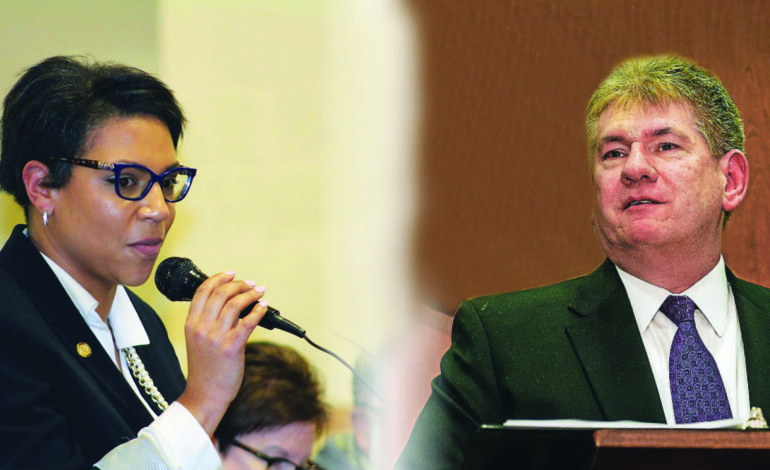 The Arab American News asked the candidates questions about a range of issues facing the county, the state and the country. They were asked to keep their answerers to 150 words or less.

Sylvia Santana: $300 million dollars is not nearly enough to fix Michigan roads.  The real issue is the disproportionate funding formula in Public Act 51 that directs money to municipalities.  Currently, rural areas are receiving far more funding as opposed to urban areas where it is most needed.  Republicans, who control both chambers, refuse to readjust the funding formula because of the political ramifications they would suffer at their next election.  Our roads are in terrible shape and this past winter’s consistent temperature changes revealed how underfunded our road funding has become.  Simply raising taxes, creating new fees, depending on unexpected revenue and taking money from other departments to help fix the roads are not viable options in the short or long term.

Gary Woronchak: A study last year claimed more than $3 billion worth of needed road projects remained unfunded, even with the increases in funding put through by the legislature in 2015. You can’t find funds without impacting other programs, so you’d have to generate new revenues, like if the recreational marijuana proposal is approved, or if we allow online gambling.  One thing we must do is change Public Act 51, the state’s funding formula, which is unfairly weighted toward northern Michigan. The formula must recognize greater needs in more populated and high-traffic areas.

SS: As state representative I held three town halls in my district on this issue. 48227 in my current district is the zip code with the highest auto insurance rates in the nation.  At every town hall, residents demanded that I support House Bill 5013 and I proudly stood with Mayor Duggan and some Detroit representatives in support of this bill, which sought to lower rates.  Recognizing this bill was not a total solution, it was, however, the closest we have come towards lowering auto insurance rates in 35 years.  As a Democrat I believe in full transparency of the MCCA, elimination of the use of non-driving factors to determine our rates, the elimination of redlining which affects Detroit and other urban areas.  I speak with citizens every day who share their bills with me and one woman with a clean driving record presented me with a bill of $16,000 for the year only because she lived in Detroit.

GW: The current insurance system is out of control – Michigan’s rates are the highest in the country and Detroit’s are ridiculously high, and a detriment to growth. Reform can’t just be who has the best ad campaign, because there are stakeholders who want to protect their turf. Any meaningful no-fault reform needs to address discriminatory practices in determining rates, like credit score, zip code, age and so on. Compromise must be reached between those who want to preserve the current system and those who recognize that the costs make it unsustainable as it is. I don’t support a one-method solution like just offering lower-quality insurance for people with less money.

SS: Neighborhood resurgence must continue to include the demolition of abandoned buildings, while concurrently building market rate housing.  Public safety must always be a top priority and improvements to our quality of life, such as park improvements with amenities, are also key features to neighborhood revitalization.  We must also focus on our commercial strip revitalization strategies to build up our small business districts and code enforcement.  I work closely with the small business community by collecting their ideas and trying to translate those ideas into polices that make sense for small business owners.

Improving our education (K-12) portfolio is very important to attracting families to Detroit.

Mass transit is another feature that is important to the region and I look forward to working on that as a part of a larger plan for the Detroit metro area.

On their relationship with the Arab American community

SS: I have a strong relationship with the Arab American community.  When I began my term as state representative, the first initiative I undertook was to bring conservative right wing Christian lawmakers with very low opinions and/or impressions of the Arab community to Dearborn to meet with leaders and to discuss Islam. I did this in cooperation with my colleague, Rep. Abdullah Hammoud. My hope was that I could change their viewpoints by destroying their stereotypes and/or improving their knowledge of the community. I knew the election of President Trump would create hysteria and Islamophobia in American politics. But, as the old saying goes, “When you know better, you do better.”

I have done other private tours with colleagues to help them understand the Arab culture and why their understanding of Islam is incorrect.  These opportunities are small but leave lasting impressions.

GW: I have a very close and personal relationship with the Arab American community I have proudly represented for the last 20 years. I have demonstrated that in legislation, by passing the Halal Food Act, a state law that gives Muslims consumer protection when food is advertised as halal.  I have demonstrated that with appropriations, including a $1 million grant toward the ACCESS health center and county funding toward HYPE Athletics. I have spoken through resolutions to support the Take On Hate campaign, to oppose Trump’s Muslim ban and, every year, to commemorate the start of Ramadan.  I have marched with this community, celebrated, protested and mourned with the community.

On Hood’s tenure and what they would do differently

SS: I believe a deep analysis of Senator Hood’s eight years as senator will demonstrate that he has been a strong progressive with a different approach towards delivering results for the people of the third district.

Every elected official is different and so is the environment in which they operate.  My approach is collaborative and bipartisan.  In my first term, I was able to help lead the repeal of the Driver’s Responsibility Fees and asked to help develop solutions to our mental health policies in the state.

Senator Hood has much to be proud of for his time in office. I look forward to succeeding him in January. I would be much more visible in the community and engaging with the youth with the goal of developing the next generation of political and social leadership in the community.

GW: I served with Morris Hood when we were both state representatives. He has been my senator for eight years and he has served us well, as a leader in the Senate and as an advocate for the community.  I will follow his example if elected.

SS: Public education in Detroit has been in a disastrous situation since the first state takeover under Governor John Engler and the Republicans.  Detroit public schools now has 50 percent fewer students than 20 years ago in part because of out-migration that I would argue was accelerated by the hostile actions of the state towards Detroit.  In Detroit, 50 percent of school aged children either attend a charter school or a school outside of Detroit. I believe the best solution to improving education in Detroit [and Dearborn] is listening and accepting the recommendations of trusted education experts, teachers, parents and — most importantly — the students.

The main arguments about education that I consistently hear about is the amount of testing that is administered, low teacher pay, bilingual education dollars being cut and specifically Detroit the social issues affecting children that are well outside of education.

As far as public dollars going to fund charter schools I am opposed to this activity. I am pro traditional public education as reflected by my endorsements from the MEA and the AFT.

GW: Traditional public schools need more attention and resources, I am not supportive of for-profit schools. The DeVos experiment in education has not helped raise up our students. We need to invest more, too, into programs that help children who have difficult circumstances at home. It has long been known that poverty, lack of nourishment and other personal factors can negatively impact a student’s performance. We need more funding for special programming to help students at risk of falling behind. When I was a state representative, I amended the School Aid Act to get Dearborn schools $2.5 million more per year for at-risk programs.

SS: Quite frankly, I believe the Supreme Court made a politically motivated position to satisfy the needs of the president and they used the English language in a masterful way to legitimize their decision.  This decision has set this country behind 100 years.

GW: It is a terrible, discriminatory policy, and it was a sad day in American history when the Supreme Court upheld it.  Within one week after Trump issued the Muslim ban in early 2017, the Wayne County Commission became one of the first governmental bodies in the country to speak out against it, by approving a resolution I wrote opposing the Muslim ban.