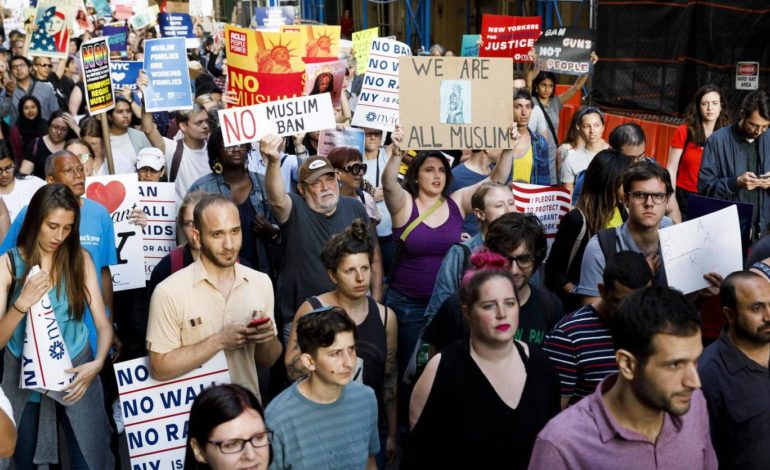 NEW YORK — Yemeni Americans are most affected by President Trump’s Muslim travel ban among the Arab and Muslim Americans. Yemen is one of the countries listed on the third version of the travel ban, which was upheld by the U.S. Supreme Court on Tuesday. The ban blocks citizens of Iran, Libya, North Korea, Somalia, Syria and Yemen, and some Venezuelan government officials and their family members, from obtaining a broad range of U.S. immigrant and non-immigrant visas.

Abdo Elfgeeh got a text message on his way to work Tuesday morning – it was a link to an article reporting the travel ban ruling.

“I couldn’t bring myself to read it,” Elfgeeh said.

His petition to sponsor his wife and four children, who are currently in Amman, Jordan, was rejected earlier this year because of Trump’s travel ban. He and has family had been patiently waiting on a decision from the Supreme Court to find out if they would be reunited.

After a while, he opened the article. His worst fears were realized: The Supreme Court had sided with the Trump administration in a 5-4 decision

“I am in shock,” Elfgeeh told Documented shortly after reading the decision. “I was not prepared for this.”

Yemeni New Yorkers are now grappling with whatever options remain to bring their families who are fleeing the war in Yemen to the U.S. Few legal avenues remain to reunite with their families besides an elusive waiver process. Hundreds gathered in Foley Square in Manhattan on Tuesday to protest the Supreme Court’s decision. Speakers from a variety of advocacy and faith groups, as well as politicians, railed against the Trump administration.

Debbie Almontaser, the secretary of the Yemeni American Merchants Association and a leading Yemeni-American activist, told the crowd that she had been inundated with text messages from Yemenis after the ruling came down.

Roughly 26,000 New Yorkers have been impacted by the travel ban, the mayor’s Office of Immigrant Affairs estimates. New York also accounts for roughly half of America’s 44,000 Yemenis, according to The Arab American Association.

Among them is Mohamed Taaher Hamza. His wife, oldest daughter, and youngest son are stranded in Djibouti due to the travel ban. After fleeing the war in Yemen, Hamza’s petition to bring them over was denied in April.

He could not believe the ruling when he heard it.

“We were not expecting this,” Hamza told Documented. “I thought this country was a nation of laws with a Constitution. How could this happen?”

Hamza’s family had heard about the decision but he could not bring himself to call them.

Very few legal options remain for those the travel ban rejected. The ban was created a week into the Trump administration as the president signed an executive order that barred citizens from seven predominantly Muslim countries from coming to the U.S. The order was met with a nationwide rebuke and sparked several legal challenges.

Since then, the order has zig-zagged through the courts. It was updated twice to acquiesce to some of the courts’ concerns, as federal judges blocked implementation of the order multiple times. Then it reached the Supreme Court, where the third iteration of the order was allowed to go into effect on Dec. 8.

The one option that remains for people like Elfgeeh and Hamza is a waiver to the travel ban. The executive order allows consular officials to waive the ban on a case-by-case basis, a central pillar of the government’s defense of the ban. Lawyers and advocates have found that the process is opaque and seemingly random.

One argument the Trump administration made to the Supreme Court this spring to prove the legality of its travel ban on several majority-Muslim countries was that it had a robust waiver process that would allow people in on a case-by-case basis. But new State Department statistics released on Tuesday show that U.S. consular officers issued waivers to the ban in only 2 percent of visa applications over the course of nearly five months.

Reuters reported on Tuesday, that people from countries covered by the ban filed 33,176 applications for non-immigrant and immigrant visas between Dec. 8, 2017 and April 30, according to data in a June 22 letter from Assistant Secretary of State Mary Waters to Democratic Senator Chris Van Hollen. The letter was received by Van Hollen’s office on Tuesday, and his office provided it to Reuters.

Of those, 4,900 applications were rejected for reasons other than the travel ban, while 1,147 were found eligible for visas based on an exception to the ban. Those exceptions apply to specific categories including refugees, dual nationals or diplomats and people in such categories do not need waivers.

Nearly 4,200 applicants have been interviewed but are “still awaiting a determination on a waiver,” the letter states. Between April 30 and May 31, a further 189 people were cleared for waivers, but it is unclear how many more applications were filed in that time. The Center for Constitutional Rights studied the waiver process in a recent report, “Window Dressing the Muslim Ban.” The authors found that the process was almost entirely random with consular officials having little guidance. Following oral arguments at the Supreme Court, there was a spike in the number of waivers grant.

“This abrupt change, without any corresponding amendments to the publicly released standards for granting waivers, only confirms the arbitrariness and opacity of the waiver process,” the report’s authors wrote.

The Supreme Court decision was met with jubilation from the president, who tweeted, “SUPREME COURT UPHOLDS TRUMP TRAVEL BAN. Wow!”

Mayor Bill de Blasio said in a statement, “This ban is institutionalized Islamophobia, promoted under the guise of national security.”

That message was heard from the speakers at the rally in Foley Square on Tuesday, where people held up signs that said “No to racism” in Arabic and “No Nazis in our White House.”

Just hours after the Supreme Court verdict on the Trump administration travel bans was announced on June 26, New Yorkers responded to an immediate, last minute call to action by activist Linda Sarsour on her Facebook page: “BREAKING NEWS. We lost. Reversed and remanded. The Supreme Court just took the side of Trump and his White supremacist administration in the Muslim and refugee ban case. They decided in favor of xenophobia. Another dark stain on our country’s history. Meet me at Foley Square at 6 pm.”

Members of dozens of groups — immigration and civil liberty, Muslim and Jewish organizations, as well as individuals — comprised the rally, coordinated by MPower Change’s Mohammad Khan. Murad Awawdeh of the New York Immigrant Coalition, one of the event’s organizing groups, opened the rally noting that the crowd was what New York looks like in its diversity, taking a stand for “rights of everyone who lives among us.” Public Advocate Letitia James’ words were succinct: “No hate, no fear, Muslims are welcome here.” Demonstrators in Minneapolis show their dismay at the Supreme Court’s decision to uphold the Trump administration’s travel ban.

Protesters gathered Tuesday evening held signs reading “No Muslim ban ever” and “Demand an end to anti-Muslim bigotry.” At one point the crowd chanted, “The Muslim ban will not stand.”

State Rep. Ilhan Omar, a Minneapolis Democrat running for the U.S. House, spoke of the difficulty of Muslims being singled out for extra scrutiny at airports. Omar said those imposing the travel ban “forget there are real people who are going to be impacted.” Several people gathered along Brookhurst Street in Anaheim’s Little Arabia district for a rally. Protestors denounced the Muslim Ban with chants amplified by a bullhorn and broke out into a small march.

None expressed surprise at the Supreme Court decision, but felt disappointed by it just the same.

“We’re obviously not going to give up hope,” said Rasha Moubacher, a 25-year-old Muslim from Anaheim. “We’re going to continue to organize.” The activist is Lebanese and Palestinian but has family members that are Syrian nationals who are affected by the news.

“We believe it was based upon anti-Muslim animus, and it violates our constitution,” he said.

The ACLU of Michigan, the Arab American Civil Rights League (ACRL) and other partner organizations filed  a lawsuit last year to challenge the travel ban on the basis of anti-Muslim discrimination. It will no longer move forward due to the outcome of this ruling, the Detroit News and Associated Press reported.

Nabih Ayad, an attorney who led the lawsuit and a founder of the ACRL, also condemned the ruling.

“The Supreme Court’s decision today opens the door for bolder administrative action by the Trump administration that would further discriminate against ethnic and religious groups,” he said in a statement. “This ruling deviates from policies that prior administrations have worked diligently to foster and promote.”

“Michigan’s Muslim community has many people from Yemeni and Syrian backgrounds,” Walid said. “Both of those countries are facing terrible crises right now. We have people in our community who have loved ones who aren’t able to come to the U.S. because of this Muslim travel ban. There are innocent children and minors that are stuck abroad or are in refugee camps and cannot reunite with their loved ones.”

Leaders and activists in the Muslim American community solidified their resolve and commitment in fighting the ruling. The Michigan Muslim Community Council, along with ACLU of Michigan and CAIR Michigan, will be hosting events in support of the #NoMuslimBanEver campaign. A rally was held in Campus Martius in Detroit on Tuesday.