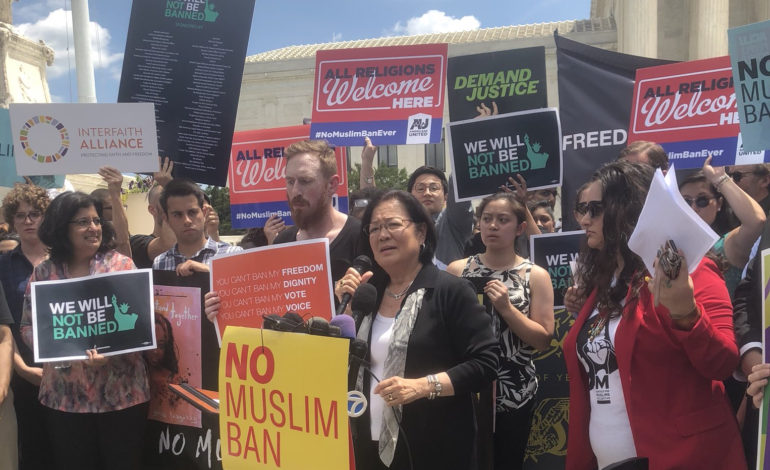 Japanese American protesters: What happened to us should never happen again Japanese American holds a sign during a demonstration outside the Supreme Court in Washington, DC on Tuesday. – Twitter

WASHINGTON/DEARBORN — Outside the U.S. Supreme Court on Tuesday, many protesters held signs that read “No Muslim Ban” and “We Will Not Be Banned” as they protested the court’s decision to uphold President Trump’s travel ban.
However, in the process — thanks to a heated argument involving Justice Sonia Sotomayor — the court also overturned the infamous 1944 Supreme Court decision blessing the internment of Japanese-Americans during World War II.
It is what Sen. Brian Schatz (D-Hawaii) described as the “silver lining” of the Trump v. Hawaii ruling.
But members of the Japanese American Citizens League — who said they were gathered to support their Muslim allies — wanted to tell the Supreme Court they believe that the ruling isn’t making history; it is instead allowing history to repeat itself.
Amid the sea of signs, theirs stood out.
“SCOTUS repeats disgraced history,” one sign said, with an image of a front-page headline about American internment camps holding Japanese-Americans during World War II.
“Presidential power doesn’t always protect,” read another, with a black-and-white image of some Japanese Americans who were held at the internment camps.
David Inoue, the executive director for the Japanese American Citizens League, said it was important for the organization to help others “stand up to discrimination.”
“What happened to us should never happen again,” he told CNN in an interview. “And the sad thing is with this decision today, is they are affirming that it is OK to happen again. The irony of the [travel ban] decision is they did repudiate Korematsu (v. United States) for the racism it demonstrated and yet ignored the racism at the basis of the policy the Trump administration is implementing here.” Members of U.S. Congress toe party line
Congressional reaction to the U.S. Supreme Court’s support of President Trump’s travel ban has fallen mostly along party lines, with one Democratic senator backing legislation to deny funding for the plan.
The chairman of the Senate Judiciary Committee, Republican Senator Chuck Grassley, said in a statement that it’s “very clear” the Supreme Court based its decision on evidence that the president was following the law.

“And the majority found … that there was reason to believe that national security was a concern,” he said.

Senator Chris Murphy, a Democrat, has called for passage of his bill to block funding for enforcement of the ban.

“This Supreme Court decision essentially gives the White House license to discriminate based on nationality or religion, which stands in direct opposition to what I was taught to love about this country,” he said.

In the House, Republican Judiciary Committee chairman Bob Goodlatte said Trump was “right to hit pause” on admitting foreign nationals and refugees from countries where adequate screening cannot occur. He said Trump, “clearly has the authority under the law and the Constitution to limit immigration when it is in our national security interest to do so.”

“I believe that the justices got it wrong in this case,” House Democratic Whip Steny Hoyer said. “Muslim immigrants have been a part of making America a stronger, safer and more prosperous nation for generations.”
House Minority Leader Nancy Pelosi called the court ruling “dangerous” and said it undermines American values and the Constitution.
And said,

“This is a dark day for America,” said Democratic Congresswoman Barbara Lee.

Yet, she added, “This decision does not change the character of our country and I know that this fight is not over.” Congressman Keith Ellison (D- Minnesota)
“Like the Korematsu decision that upheld Japanese internment camps or Plessy v. Ferguson that established ‘separate but equal’, this decision will someday serve as a marker of shame,” Democratic Rep. Keith Ellison, of Minnesota, tweeted. Ellison is one of two Muslim members of Congress, the other member is U.S. Rep. Andre Carson.

The court’s decision Tuesday, “will be remembered as a shameful sanctioning of discrimination,” Carson said.  He compared the travel ban to historical atrocities after the high court reversed a series of lower court decisions that had struck down Trump’s travel ban as Illegal or unconstitutional.

“I think this is very personal,” Carson said in an interview with IndyStar. “As a Muslim, I’m deeply concerned and I think it plays into his campaign narrative. It plays into the tone of this country and that’s to make America great again; take us back to some mythical good-ole days.”

The following members of the Michigan congressional delegation released statements or tweeted their responses to the highest court ruling on Trump’s controversial Muslim travel ban:

Congresswoman Debbie Dingell (D-Dearborn)
“Today is a sad and disappointing day,” Dingell said in a statement. “From our earliest founding, the United States has been a land of opportunity for individuals seeking religious freedom. Our Constitution and the First Amendment are clear: Our country must respect all religions. The Supreme Court made the wrong decision in their interpretation and application of the Constitution.
“The discriminatory Muslim Ban keeps people away from their loved ones and says ‘Do Not Enter’ to refugees fleeing war and violence,” she added. “National security experts have been clear that the Muslim Ban has made our country less safe. Religious freedom is one of the most fundamental pillars of our Constitution, and this policy is at odds with who we are as a nation. We will continue to fight.” Congressman Dan Kildee (D- Flint)
“This Supreme Court decision will go down in history as a great moral failure,” Kildee said. “Today’s decision fails to protect religious liberty. Every American, no matter their race or religion, should be concerned about the dangerous precedent of this ruling. Discriminating based on one’s religion is not consistent with our American values.
“The president’s discriminatory Muslim Ban makes America less safe,” he added. “Counterterrorism experts have voiced concern that such bans are a powerful recruiting tool for terrorists trying to do us harm.
“To the millions of peaceful Muslim-Americans, know that you are very much part of our shared American story. I am deeply saddened by today’s decision, but I will continue fighting for religious liberty for all.”

Congresswoman Brenda Lawrence (D- Southfield)
“The American people are not fooled,” Lawrence said in a statement. “This third draft of Trump’s travel ban is ultimately a Muslim ban that unjustly discriminates against people because of their religion. Elections have consequences, nominations have consequences and today’s ruling represents a sad day for our democracy. This is a shameful ruling in American history that will not be soon forgotten.”

U.S. Senator Gary Peters (D- Michigan)
“I am very disappointed in the Supreme Court’s divided 5-4 ruling on the Trump administration’s travel ban,” Peters said in a statement. “As a member of the Senate Armed Services and Homeland Security Committees, I am focused every day on keeping Americans safe from those who wish to do us harm. The president has made clear this ban is intended to be discriminatory, just like previous versions of the ban that could not pass legal muster. I am proud to represent a vibrant Arab and Muslim American community and I have heard firsthand from local leaders about the consequences of this executive order. This divisive executive order does nothing to keep us safe and serves as a propaganda tool for recruitment by terrorists and extremist groups intent on attacking the United States and our allies.”

“This is a deeply disturbing decision by the Supreme Court,” Stabenow said. “I stand with Muslim Americans and so many other Michigan citizens against this ruling. The president’s executive order does not make us safer. Instead, it is ruining America’s reputation in the world, undermining our relationships with our most critical allies and hurting Michigan families and communities.”