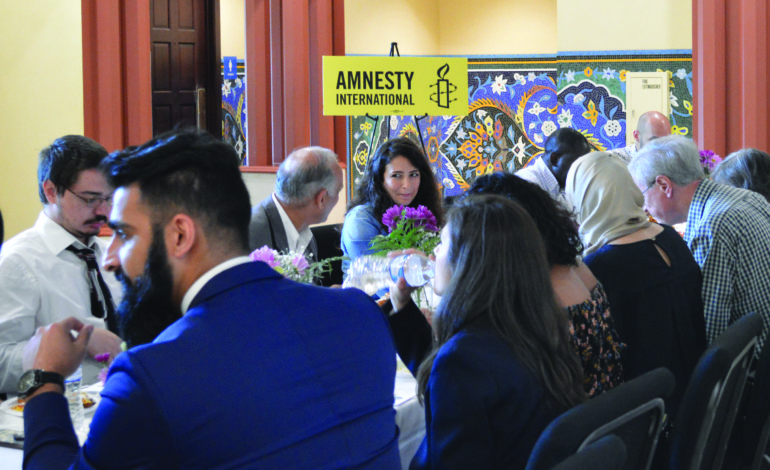 Attendees having dinner and conversation with refugees as part of Amnesty International's #IWELCOME campaign, at the Arab American National Museum, July 3 - Photo by The AANews

DEARBORN – About 80 percent of people surveyed worldwide say they would welcome refugees in their country, community or home, according to a 2017 Amnesty International survey of 27,000 people across 27 countries. Yet, most leaders of those nations have shut their doors on the 2.3 million refugees fleeing persecution and devastated homelands.

As long as there is a disconnect between people and their governments on refugee resettlement, Amnesty is calling on individuals and communities to help refugees in their own creative ways, ranging from sponsorship and academic scholarship opportunities to hosting get-togethers and beyond with the launch of the “I Welcome” campaign.

Metro Detroiters expressed their support and hospitality for refugees and asylum seekers at the Arab American National Museum in Dearborn on July 3, dining together with immigration activists, artists and families seeking asylum in the U.S.

Over dishes the refugees were encouraged to bring, attendees sat at a long table and discussed current efforts to support refugees, heard stories and proposed new ways to provide for the marginalized groups.

“With families being separated, escaping persecution, the content of the home is being brought up more often,” said Hamza Latif, Amnesty’s regional field organizer.

He emphasized that communities become stronger when relationships between neighbors are formed.

“While some might talk about building a taller wall, Amnesty wants to build a longer table,”he said.

During the conversation, an asylum seeker from Uganda who wished to remain anonymous said in the year he’s been in Detroit, he’s noticed that not many local churches and charities are focused on helping refugees, but was grateful for the shelter that also provides food, transportation and healthcare for his family.

As the man cut up food for his young son, he added that most Americans are just fearful of something new. The asylum seekers are doctors, engineer and artists who have sought freedom on American land, but their cases are pending and their immigration status is in limbo.

Thomas Rogers, program director at Freedom House Detroit, where the Ugandan family stays, told The AANews he participated because Amnesty is promoting useful dialogue and understanding about refugees, now that the topic has become a hot-button issue.

“The goal of tonight is to really humanize these populations, to put a face and a story to these categories of people and to help build bridges between different cultures,” Rogers said. “The more that we’re all in sync with one another, the more cultural harmony that exists.”

The hall at the museum also featured original paintings by refugee children living at a camp in Greece, a country that’s been largely welcoming.

Danya Shaikh, a freelance art director who did art therapy counseling with the refugee children at a shelter called Mosaico House in Greece, told The AANews art was a good way for children, aged 2 to 14, to escape trauma and make them feel that they’re not that different from other kids.

She said many of the kids were from Syria, Afghanistan, Pakistan and Ethiopia, among other countries. One painting by a Syrian refugee girl depicted a ship sailing on rough waters – highlighting a heavy heart for having to leave her home.