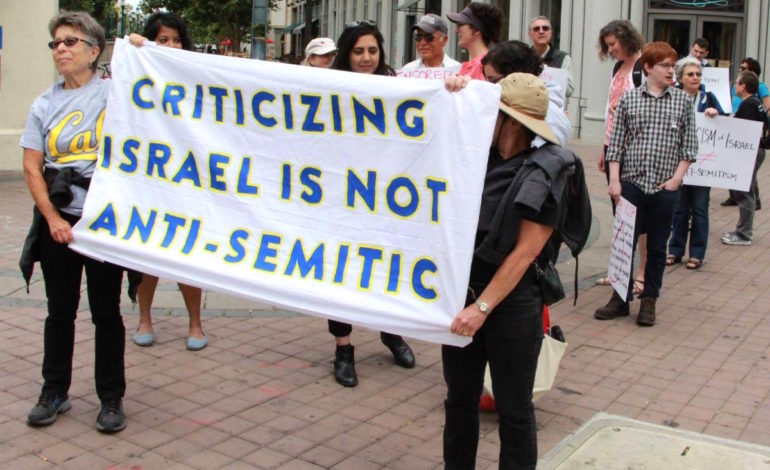 Activists from the Jewish Voice For Peace protesting the “Anti-Semitism Awareness Act“ which is pending in Congress.

After trying and failing to pass the so-called “Anti-Semitism Awareness Act” in the last legislative session, supporters have once again submitted a bill that, if passed by Congress, will dramatically curb free speech and academic inquiry on college campuses.

As I argued in my testimony to the House Judiciary Committee last year, backers of this legislation are less concerned with combating actual occurrences of anti-Semitism than with suppressing growing criticism on college campuses of Israel’s treatment of Palestinians and the United States’ complicity in it.

As groups such as Students for Justice in Palestine, Jewish Voice for Peace and Open Hillel become more active and convince their fellow students to take a closer look at the situation of Palestinians living under Israeli occupation, pro-Israel organizations such as Birthright, the Anti-Defamation League, AIPAC and the Simon Wiesenthal Center find themselves on the defensive and have sought to cast these groups as inherently anti-Semitic.

Since they are losing the battle over student opinion on a fair playing field of public debate on college campuses, supporters of the Anti-Semitism Awareness Act are trying to demolish the entire field and stop any debate from occurring at all.

The “Anti-Semitism Awareness Act” would compel the Department of Education to utilize a questionable definition of anti-Semitism to determine if a wide array of incidents on college campuses, including student protest, are in violation of current anti-discrimination law. The definition of anti-Semitism used by the Act is one formerly employed by the State Department and is written in such a way that many of the current debates concerning Israel that occur among Jews in Israel and within the American Jewish community would themselves be classified as anti-Semitic.

Even the original author of the definition has testified that it is inappropriate for the purposes of legislation.

Such legislation will do nothing, of course, to stop actual anti-Semitism on college campuses, which, like ethnic hatred of all sorts, has been growing since the election of President Trump. Just as African American, Muslim, Arab, Native American and Latinx students face increased hostility, so too have many Jewish students experienced hatred from White supremacists. All of these forms of hatred and intolerance are out of bounds and must be resisted wherever and whenever they occur.

But criticism of Israel — be it of its policies, laws or even existence as a Jewish state — is not the same thing as anti-Semitism, even if some anti-Semites couch their hatred in criticisms of Israel. Although identification with Zionism may be a core belief among many Jews, Israel remains a country complete with borders, a military, an electoral system, a nuclear arsenal and a complicated history that involves both the rescue of one people and the forced displacement of another.

As is the case with all other countries in the world, Israel must be subject to critical debate and scholarly inquiry. It can be protested, contested, challenged and even boycotted. Students and faculty should not be placed in violation of the law for doing so.

– Barry Trachtenberg is the Rubin Chair of Jewish History at Wake Forest University. In November of 2017 he testified about antisemitism on college campuses before the Judiciary Committee of the U.S. Congress. He is the author, most recently, of “The United States and the Nazi Holocaust: Race, Refuge, and Remembrance” (Bloomsbury, 2018).