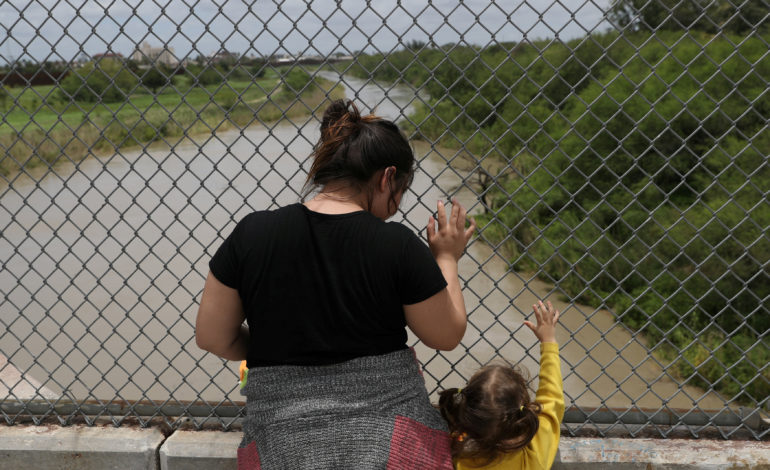 A Honduran mother and her 3-year-old daughter seeking asylum wait on the Mexican side of the Brownsville-Matamoros International Bridge after being denied entry by U.S. Customs and Border Protection officers near Brownsville, Texas, June 24 - Reuters

WASHINGTON, D.C. — A federal court has blocked the arbitrary detention of asylum seekers fleeing persecution, torture or death in their countries of origin. It also ordered a case-by-case review of whether each asylum seeker in a class-action lawsuit should be released on humanitarian parole. The ruling began from a challenge brought in March by the American Civil Liberties Union, Center for Gender and Refugee Studies, Human Rights First and Covington & Burling LLP.

On Monday, July 2, Judge James Boasberg of the Federal District Court for the District of Columbia stated in his ruling that asylum applicants who establish a “credible fear” of persecution in their native country must either  be granted a court hearing within seven days or be released. He also found that the government’s own directive calling for asylum applicants to be freed when appropriate while their cases are pending “has been honored more in the breach than the observance.”

Government policy states that asylum seekers be granted humanitarian parole as they await their immigration proceedings, provided they meet a series of requirements. The Trump administration has often jailed them indefinitely, in violation of the Constitution, U.S. immigration laws and the Department of Homeland Security’s written policy.

All the plaintiffs passed credible fear screenings — meaning a U.S. asylum officer has determined their fear of persecution is credible and that they have a significant possibility of receiving full asylum. More than 1,000 asylum seekers are estimated to have been denied parole in those five ICE districts.

“Today’s decision will have an enormous impact on asylum seekers, who pose no risk, and are currently languishing in detention,” said Human Rights First’s Legal Director Hardy Vieux  on Monday. “It is a rejection of the Trump administration’s blanket policy of denying parole to those seeking protection in this country. We hope that our clients and those like them will no longer be wrongly held in prison-like conditions.”

The named plaintiff, Ansly Damus, an ethics teacher from Haiti, has been locked up in Ohio for more than 18 months. Damus committed no crime. Rather, he faced violent, political persecution after speaking out against a government official and had to flee his homeland. When he got to the U.S., he requested asylum from immigration authorities. According to the ACLU, he passed his credible fear interview and was twice granted asylum by a judge. Despite that, he has remained behind bars while the government appealed his grants of asylum. The Trump administration put Damus behind bars indefinitely alongside thousands of other asylum seekers like him. ICE has not allowed him outside even once in more than a year.

“I have not breathed fresh air or felt the sun on my face, and I never know if it is cold or hot outside, if the sun is out and if the seasons are changing,” Damus said when the lawsuit was filed.

“The United States has long recognized its moral and legal obligation to protect refugees, including the right to seek asylum,” said Eunice Lee, co-legal director of the Center for Gender and Refugee Studies. “People fleeing persecution should never be locked away just for asserting this right. Today’s decision recognizes that asylum seekers deserve compassion and the protection of our laws, not punishment.”