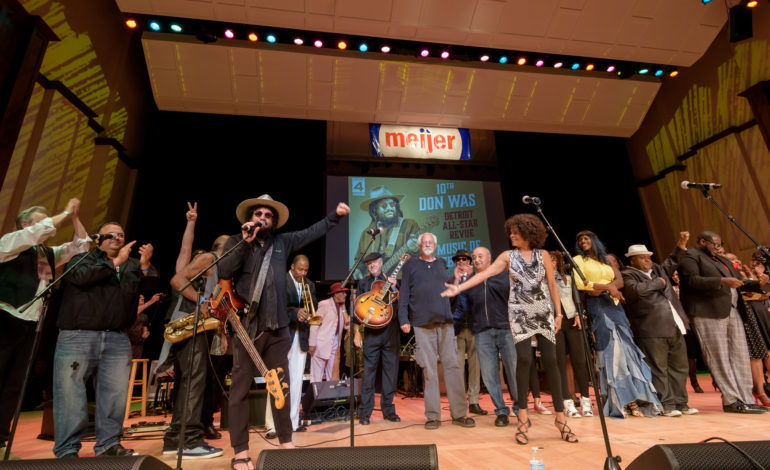 The five day festival is free to the public and held at various venues in Detroit and Dearborn, including the Detroit Institute of Arts and the Arab American National Museum.

The festival began as a one-day event, growing to a five-day festival in 2007. The Arab American National Museum (AANM) is partnered with ACCESS, the Detroit Symphony Orchestra, the Detroit Institute of Arts, the Charles H. Wright Museum of African American History and the University of Michigan to produce the Concert of Colors.

Ismael Ahmed, former director of ACCESS  and a board member of the AANM, established the Concert of Colors with New Detroit in 1993. He now curates the event, booking the performers and speakers.

“The Concert of Colors is aimed at bringing together musicians from all cultures,” Ahmed said. “It’s an amazing event; you get to know people from all over the metro area of all cultures and backgrounds. You get to meet and work with some of the greatest musicians on Earth. We’ve worked with Ray Charles, Little Richard.”

This year, Ahmed said he’d hoped to book Ramy Essam, a rock musician best known for performances in Cairo during the 2011 Egyptian Revolution, as the main Arab performer. But, Ahmed said Essam was unfortunately unable to attain a visa to be a part of the events in Detroit.

Ahmed also cited fears of Essam being sent back to Egypt by the United States government as a factor in his representatives’ efforts to gain a visa for the performance.

“They were struggling to get the travel documents, but that wasn’t the main reason,” Ahmed said. “They just decided that it was not safe, that’s what [Essam’s manager, Valerie Denn]  told me.”

Denn told the AANews that Essam hadn’t gained the right travel documents in time and that they’ve been “dialing back” performances in the United States due to that restriction.

“I think it’s an important story to tell,” Ahmed said. “We do the Concert of Colors for a reason, to bring people across all lines and to support the fight for freedom, for communities who are under attack [by the U.S. administration] for different reasons.”

“We wanted to have Ramy [Essam] come so we could tell his story, as well as the story of people struggling for a better life in Egypt and the Arab world,” Ahmed said. “And it seemed like a good conduit for that, but we don’t want to risk anybody’s life to do that.”

The Concert of Colors features performances by both local and visiting musical artists ranging in genres from world to sounds indigenous to Detroit. Its annual forum event, occurring Thursday July 12, features presentations and discussions from community leaders and activists with connections to cultural institutions.

Sean Blackman’s In Transit will be opening the main stage Sunday, July 15 at 3 p.m. with his project, “Global Review”, which he said will represent about 10 different countries’ styles of music in one ensemble— as well as dancers representing multiple cultures.

“The whole goal behind what I’m doing is to pull the curtain back to show all the amazing talent from around the world that’s living in Metropolitan Detroit that not everybody gets to see,” he said.

Blackman said one of the coolest parts of being a part of the festival is meeting other musicians from all over the world and learning about their styles of music.

“Many people are just a blues musician or just a jazz musician and then they find themselves just getting to know that community,” he said. “But I get to work with, meet and befriend people from all over the planet.

“There’s so many cool instruments out there that are thousands of years old that musicians are still playing in modern music,” he added. “Being born and raised in Detroit, with rock, funk, soul, blues and jazz. I integrate it with these musicians playing instruments from other countries.”

“It’s not authentic at all because of that, but you get a taste of it all kind of mixed in one,” Blackman said, adding that he feels this festival is, “really good for our community.”

“It’s an opportunity for mainstream Detroit to witness what’s in their own backyard,” he said.

Blackman said his first time participating in the Concert of Colors was in 1998, and he is grateful for Ahmed’s part in the festival.

“We don’t have that many outlets for world musicians in Metro Detroit,” he said. “What Ismael [Ahmed] has done has really paved the way for everything that I’m doing.”

Ahmed said the vendors involved with the festival also reflect the diverse populations participating, with booths featuring ethnic foods, apparel and other merchandise.

“One of the things I’ve learned in all of my years of doing things is that our community can’t do it alone,” Ahmed said. “We can’t have the impact, the safety, the chance to make our lives and other people’s lives better unless we build coalitions and relationships. Culture is a powerful tool both for opening people up to each other, but also for change.”

Some events at the Concert of Colors require an RSVP. A full schedule of events is listed online at www.concertofcolors.com.