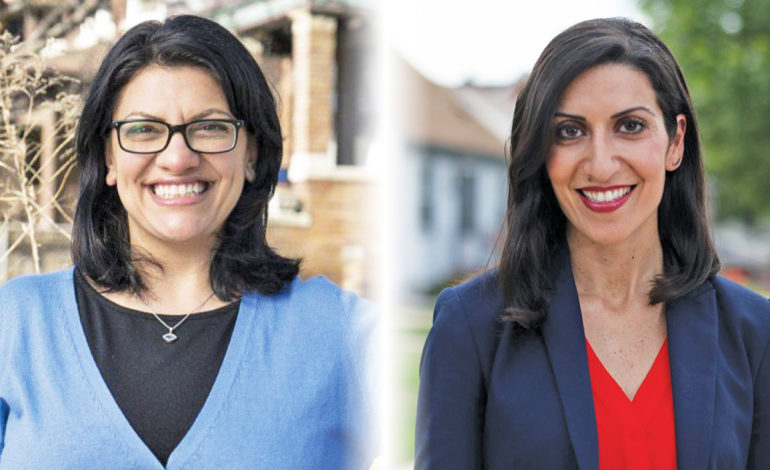 Progressive and unorthodox candidates for Congress have been racking up major victories in the past few months, sending shockwaves and turning heads in a political arena long-dominated by White Republican men with deep pockets.

On June 26, 28-year-old Alexandria Ocasio-Cortez defeated a 10-term Democratic incumbent in the primaries for New York’s 14th Congressional District. The daughter of Puerto Rican immigrants who worked as a community organizer for Bernie Sanders’ presidential campaign, Ocasio-Cortez is running to represent the Bronx and Queens, where half the population are immigrants and 70 percent are people of color. Time magazine called her victory “the biggest upset of the 2018 elections so far.”

In Michigan, two Congressional hopefuls could make history in the August 7 primary and November 6 general elections.

Running in politically distinct districts, Rashida Tlaib and Fayrouz Saad could become the first Arab American and Muslim women in the U.S. House of Representatives.

Minnesota Rep. Keith Ellison, a Detroit native, became the first Muslim elected to the chamber in 2007. Ellison and Rep. Andre Carson (D-Indiana) are the only two Muslims currently serving in the U.S. House.

While establishment Democrats threaten their success, the women say they can confidently rely on a grassroots movement of voters hungry for reform and a new tone from politicians on issues like immigration and healthcare.

Tlaib, a former state representative in Detroit and the daughter of Palestinian immigrants, is running in the 13th District, which includes portions of Detroit and Dearborn Heights, Garden City, Melvindale, Wayne, Westland and Inkster, among other cities.

Tlaib grew up in Detroit as the eldest of 14 children. She fought for working families as a public interest lawyer and led a national civil rights campaign against bigotry.

She told The AANews she isn’t letting any resident in her district not hear about her, with an aggressive grassroots campaign that’s about direct connection to the communities she intends to serve.

Her campaign has raised the most funds of the candidates in the district so far. She said more than 3,200 have donated from contributions as little as $1.33, adding that the gerrymandered district that stretches from one side of Wayne County to another remains a challenge for her.

She said less than half of the families in her district own their homes and pointed to the rising costs in health, home and car insurance more households are facing.

“In 2018, our families are facing unfair corporate structures in the educational, criminal justice, banking, health and insurance industry that are hurting our families,” Tlaib said. “This new act would hold those industries accountable to discriminatory practices, like the use of credit scores and inequality in education funding.”

As Michigan’s first Muslim legislator, Tlaib added that she’s not worried that her Muslim and Arab identities would get in the way of her chances, and said her history of public service exposes her faith in a positive light and pushes families to fight against stereotypes and hate rhetoric towards the Arab and Muslim American communities.

She’s confident she could win her district, but stressed that it takes more effort to turn a state “blue.”

“I am more interested in real progressives owning the ocean,” she said. “Waves come and go.”

During her tenure in Lansing, Tlaib represented Southwest Detroit’s Sixth District for six years before being term limited in 2014. She earned a b.a. in political science from Wayne State University in 1998 and a law degree from Thomas Cooley Law School in 2004. She lives in Detroit with her two sons.

The daughter of Lebanese immigrants and former director of Detroit’s Office of Immigrant Affairs, Saad told The AANews she like her chances, given her focus on fighting for “progressive solutions” is what’s made her “people-powered” campaign popular.

Running in the 11th Congressional District, which includes Birmingham, Bloomfield Hills, Troy, Novi, Livonia and Plymouth, among other cities, Saad said wherever she goes in her district, people are “hungry for real change” and seek new faces.

She said there wasn’t a question that her campaign would be outspent by her rivals’, but was confident she could take on “deep-pocketed” donors and powerful corporations like other progressive candidates have been able to accomplish, “10 to 1.”

The seat is currently held by U.S. Rep. Dave Trott (R-Birmingham), who is known for his anti-immigrant stance and is set to retire from Congress and return to the private sector in January. While more than half of the district voted for Trott in 2014 and again in 2016, his retirement has opened doors for more candidates of both parties to throw their hats in the ring.

Saad said her campaign has raised more than $600,000 from mostly small dollar donors. This week, she received the endorsement of the Progressive Caucus of the Michigan Democratic Party, in addition to the national progressive groups like Justice Democrats.

Saad blamed the status quo of stagnation and callousness in government against the working class on a Republican-majority Congress not willing to move on issues and President Trump’s policies, and pledged to work against them. Her campaign stresses the need for better healthcare, wage and family leave policies that support working families, ending the epidemics of opioid addiction and gun violence and a “fair and compassionate” immigration system.

She said she’d work to renew and strengthen assault weapons ban, improve “red flag laws” and close loopholes in background check systems. She would also protect DREAMers and offer a pathway to citizenship for “friends, family and neighbors in the shadows of a deeply broken system.”

“As Detroit’s former director of Immigrant Affairs […] I’m personally invested in fight against the president’s brutal border policies,” Saad said. “That means reversing the Muslim ban. That means ending the policy of separating moms from their kids. It means no more indefinitely detaining families who arrive here legally seeking asylum. These are all cruel gestures that cut against the character of America. And I can tell you, from my work at the Department of Homeland Security under President Obama, that anyone who tells you it keeps us safer is either lying, incompetent or both.”

She said that as an Arab American Muslim woman, she is especially attuned to the importance for minority communities to have a voice at the table when major decisions are being made.

“I’m running as a candidate who’s able and willing to turn the page on this dark chapter in our history,” she said. “I’m ready to end this chapter and ready to write the next one.”

Saad’s most recent work in public service began in 2015 when Detroit Mayor Mike Duggan appointed her as the city’s first director of immigrant affairs. She recently ended her appointment to prepare for her run.

In 2009, she was appointment by President Obama to the Department of Homeland Security’s Office of Intergovernmental Affairs. There, she worked as a liaison between the immigrant population and the government and worked on issues regarding cybersecurity, national security and law enforcement.

She earned undergraduate degrees in political science and psychology from the University of Michigan in 2004 and a master’s degree in public administration from Harvard University’s John F. Kennedy School of Government in 2015.