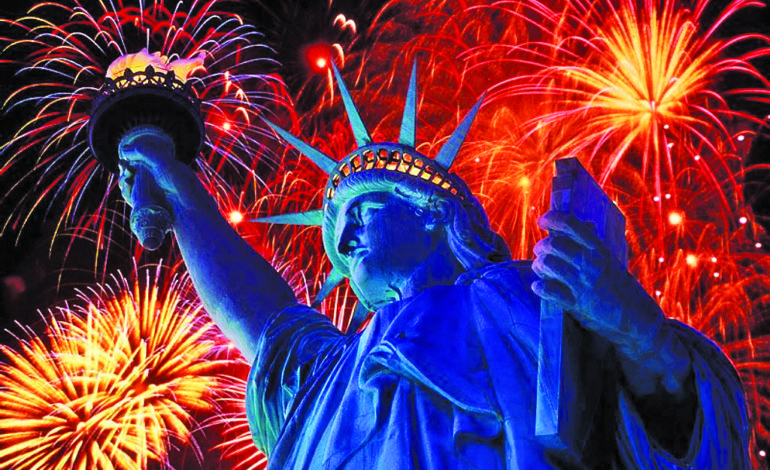 Every July 4th holiday, most Americans spend time with their families, indulge in grilled foods and watch awestruck as dazzling explosions light up the night sky. For many of us, it’s a time to reflect on the complex juxtapositions that define our nation; from the loftiest ideals — equal rights to life, liberty and the pursuit of happiness — outlined in our Declaration of Independence, to the countless times throughout our brief history that we’ve fallen far short of that vision.

As an American Muslim public policy institution, MPAC constantly grapples with that line between what makes us great and what holds us back. This week we take a close look at the following major policy areas we focus on and see just how far we have to go.

What set the United States apart right from the start was Thomas Jefferson’s insistence that our government derive its powers from “the consent of the governed” rather than what amounted to “absolute despotism” and tyranny. For nearly two and a half centuries, American presidents have both strengthened and hacked away at that consent. The current White House falls squarely in the latter category, claiming national security interests while pulverizing entire communities and flouting our core democratic institutions.

America as a nation that embraces immigrants is an ideal that has endured throughout our history, even as wave after wave of xenophobia and isolationism have drowned our policies and discourse. By all accounts, we are barely treading water now. Last month’s back-to-back images of children ripped from their parents at the border and the Supreme Court upholding the Muslim Ban have shown us the intersectionality of the White House’s devastating immigration doctrine.

When our Declaration of Independence recognized as a self-evident truth that all people are created equal, it made no reference to citizenship status, country of origin, religion or other test of true Americanness. It recognized, in writing at least, the universal human dignity that all governments and individuals must grant one another. Policy after policy from this White House has fallen short of even that basic recognition. Instead we are literally witnessing the dehumanization of entire communities, with our president raising the specter of violent “animals” who seek to “infest” our nation.

Embedded within that most regularly quoted line about “the pursuit of happiness” is a promise from our founding fathers that every American would have the same access to the opportunities and resources they need to achieve success and their own individual independence. That access, the document boldly declares, is not a privilege bestowed out of pity or benevolence, but a Divine-given right that is sacrosanct. Here, again, we have seen our nation regularly fall short of its ideals.

In 2010, one of the biggest swings towards leveling the playing field, the Affordable Care Act, was passed by a Democratic-controlled Congress and has been under attack by the GOP and our current president ever since. A much-touted tax reform plan passed last year takes aim directly at the poor. And we’ve witnessed an unprecedented attack by the White House on our public education system, from stripping key affirmative action protections to endangering the civil rights and welfare of our students.

NATION OF CONTRADICTIONS… AND HOPE

Even as the ink on the Declaration of Independence was still drying, accusations of hypocrisy and contradictions began to fly. As the abolitionist Thomas Day remarked in 1776, “If there be an object truly ridiculous in nature, it is an American patriot, signing resolutions of independency with the one hand and with the other brandishing a whip over his affrighted slaves.”

And yet, that has not and should not stop us from continuing to use the best of our nation’s founding principles as the ultimate yardstick for how far we’ve come and how much work we have left to do. The difference between how America dreams of itself and how it actually treats its people will always be uncomfortable, and often painful, to interrogate. But that is nevertheless our solemn responsibility, as proud Americans, and especially on the anniversary of our nation’s founding.

As James Baldwin wrote decades ago, in words that ring just as true today: “I love America more than any other country in this world and, exactly for this reason, I insist on the right to criticize her perpetually.”