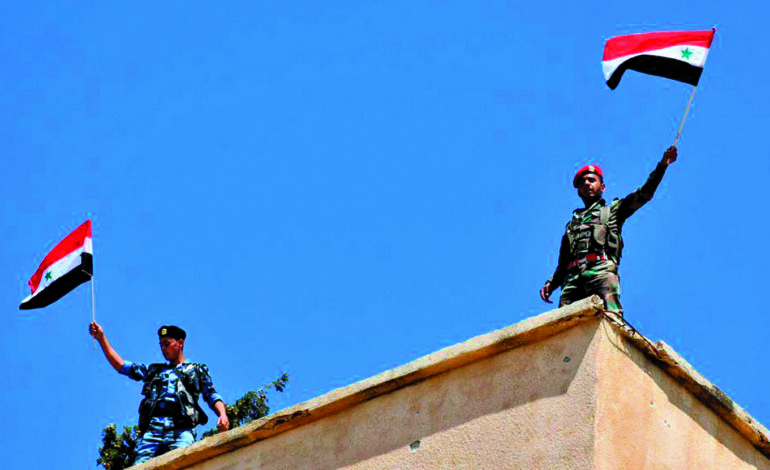 A Syrian government soldier, right, and a policeman wave their national flag at a village in the northern countryside of Homs province, Syria, May 15. Syrian government forces are in full control of the last rebel enclave in Syria’s largest province after driving out ISIS and other extremists from the region. (SANA via AP)

Ahead of the Trump-Putin summit on July 16 in Helsinki, Syria-centered spin has gone into overdrive. Different sources have leaked what is billed as President Trump’s alleged Syria deal discussed with Jordan’s King Abdullah.

Trump would “allow” Damascus, supported by Russian air power, to regain its territory along the borders of Jordan, Israel and Iraq. In return, President Putin and Syrian President Bashar al-Assad would agree to establish an extended demilitarized zone (DMZ) along these same borders, off-limits to any Iranian or Hezbollah forces.

That would set the scene for Trump’s already announced desire to withdraw U.S. forces out of Syria before October and the U.S. mid-term elections. Trump would be able to declare the proverbial “Mission Accomplished” in defeating ISIS.

The CIA and the Pentagon are not exactly enthusiastic with Trump’s alleged Syria gambit, to say the least. For assorted neocons and powerful factions of the industrial-military-surveillance complex, “Assad must go.” Syria simply cannot be traded off.

And yet there’s nothing to trade. Syria cannot be “offered” to Russia because Russia is already the major player in deciding what happens in Syria, not only militarily but via the ongoing Astana format alongside Iran and Turkey. No wonder the alleged Trump “deal” was duly dismissed by the Kremlin.

What will be negotiated in the Trump-Putin summit is something completely different. This negotiation, incidentally, will happen after the NATO summit in Brussels and before the next Astana format meeting in Sochi on July 30, as confirmed by Russian Deputy Foreign Minister Sergei Vershinin.

The heart of the matter remains Syria’s territorial integrity and the legitimacy of the government in Damascus. Russia, Iran and, after countless circumvolutions, even Turkey are for it. The NATO-Gulf Cooperation Council alliance is ferociously against it – especially after having, over the past few years, funded and weaponized those notorious “moderate rebels”, the overwhelming majority of which are nothing but takfiri jihadis.

Back to the fight in Daraa

And so, as a gloomy serpent biting its own tail, the tragic war in Syria is back to where it first started, seven and a half years ago, to a dusty, dirt-poor, religiously intolerant, back of beyond Daraa. Just across the border with Jordan, it is splendidly convenient crossroads for weapons smuggling destined to the takfiri hordes.

As it stands, the main narrative in Western media is that “regime forces” have unleashed air strikes and barrel bombs over “rebel-held” sections of southern Syria.

Mohammad Hawari, the UNHCR spokesman in Amman, may be correct when he said, “We’re facing a real humanitarian crisis in southern Syria.” What he does not say is that quite a few “opposition bodies” – code for takfiri jihadis – have rejected Damascus-proposed deals to be back under government control, thus inflating the humanitarian crisis.

Analyst Elijah Magnier has correctly identified the state of things in the battlefield and some key sticking points have already been agreed on by Moscow and Washington.

The Syrian Arab Army (SAA) is proceeding flat out in an offensive to reopen the nation’s borders. What has not been negotiated is what happens to a tricky patch partially bordering Jordan and partially in Quneitra province, near the Israeli-occupied Golan Heights.

Once again, the holy of the holies concerns al-Qaeda. Actually, Jabhat al-Nusra, as in al-Qaeda in Syria, is now rebranded as Hayat Tahrir al-Sham and their allied collection of 54 takfiri militias, trained and weaponized in a base in Jordan, for years, by the CIA and British Special Forces.

It’s no secret in Syria, and Lebanon, how this rebranded al-Qaeda has been intertwined with the militia mishmash that is known as the Southern Front. Their intel HQ is a U.S.-led war-room based in Amman called the Military Operations Center (MOC). The MOC, staffed by U.S., U.K., France, Jordan, Israel and a few GCC operatives, is responsible for funding, weaponizing, salaries and intelligence for the takfiri galaxy. The above map, even without getting into detail, at least shows how the rebranded al-Qaeda in Syria is firmly embedded in areas under control by “U.S.-backed rebels.”

The current Damascus offensive in Daraa will be compounded with an inevitable, further offensive towards the U.S. base at Al Tanf, on the Syria-Iraq border.

Al Tanf is absolutely key to the whole plot because that’s where U.S. advisers have been for all practical purposes, rebranding takfiris into something called Maghawhir al Thawra (Commandos of the Revolution). These takfiri commandos are backed by U.S. air power and have been attacking the SAA outside a “deconfliction zone” that the U.S. has – unilaterally – set up within a 50-kilometer radius of Al Tanf.

The Pentagon narrative is that the U.S. must remain in Syria to fight ISIS. That does not add up considering the Commandos of the Revolution takfiri rebranding, coupled with the fact it was the Syrian Arab Army, Iranian advisers, Hezbollah and Russian air power who did the heavy lifting against all takfiri outfits, including ISIS.

A few Hezbollah advisers are involved in the Daraa offensive. There are no Iranian advisers. Hezbollah special forces are present in areas near the Lebanese border. But the most important point is that after the jihadi outfits are destroyed, they won’t need to remain in Quneitra or near the occupied Golan Heights.

Across the chessboard, what’s really significant is how “the presence of Takfiri Wahhabi jihadists on the Israeli-Syrian borders represents – in Tel Aviv’s view – a security factor to the Israeli Army. And Israel would rather not see the Syrian state recovering and eliminating all terrorists and jihadists.”

The Israeli military is, in fact, claiming that it “accepts” the Syrian Army operations in Daraa and Quneitra. It’s as if Israel agrees to allow Syria to be operating inside … Syria.

Analyst Sharmine Narwani, recently returned from Daraa, is adamant “the U.S., Israel and their allies cannot win this southern fight. They can only prolong the insecurity for a while before the Syrian government decides to launch a military campaign against the 54-plus-militias-Nusra occupying the south of Syria.”

So there’s got to be a deal. And this is what Putin and Trump may be able to negotiate in Helsinki.

No Takfiri left behind

The key problem remains how to make Trump understand what’s at stake in terms of U.S. forces leaving Al-Tanf. The Pentagon and the CIA absolutely love the idea of having the Maghawhir takfiris constantly attacking the Syrian Arab Army on the only available crossing between Syria and Iraq on al-Qaim-Albu-Kamal.

The reality, though, will soon set in. Russia is sending extra Special Forces. The Syrian Arab Army is already preparing for the offensive. And the Iraqi People Mobilization Units (PMUs) will also join, everything coordinated by an operations command in Baghdad.

All that is evidence the U.S. does not “have” southern Syria. What the U.S. does have is roughly 2,000 Special Forces embedded with the Kurdish YPG in the landlocked northeast and eastern Syria near the Turkish and Iraqi borders. Absolutely no one wants them there, except the YPG.

It’s no secret the usual War Party suspects want Syria balkanized and unable to concentrate on economic recovery, with help from Russia, China and Iran, to become a key node in Eurasia integration.

As for Putin’s priorities, they are crystal clear: Syria’s territorial integrity, the stability of the government in Damascus and The Gates of Hell for all takfiri jihadis, whatever their denomination, so there won’t be any further blowback in the Caucasus.

It’s up to Trump, or the CIA, or the Pentagon if they insist on considering “No Takfiri Left Behind” a sound geopolitical strategy.

Pepe Escobar is a Brazilian journalist. He writes a column – The Roving Eye – for Asia Times Online and works as an analyst for RT, Sputnik News, and Press TV as well as formerly for Al Jazeera.