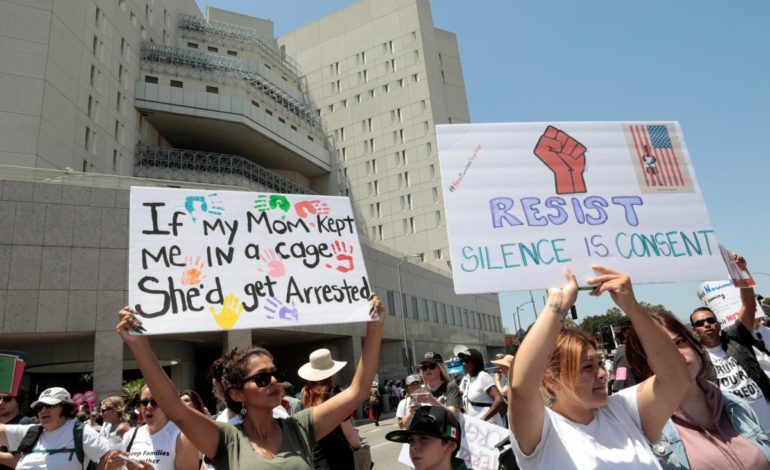 Demonstrators protest in front of the Metropolitan Detention Center, Federal Bureau of Prisons, during a national day of action against the Trump administration's 'Zero Tolerance' policy in Los Angeles, California, June 30 - Reuters

WASHINGTON, D.C. — Tens of thousands of protesters marched in cities across the United States on Saturday to demand the Trump administration reverse an immigration crackdown that has separated children from parents at the U.S-Mexico border and led to plans for military-run detention camps.

Outside the White House, protesters waved “Families Belong Together” signs and chanted “Shame!” as religious leaders and activists urged the administration to be more welcoming of foreigners and to reunite families.

“The way they treat families, the way they treat immigrants, that’s not America,” said protester Aneice Germain of President Trump’s tough stance on immigration, a cornerstone of his 2016 election campaign and his presidency. Trump was out of town at a golf club he owns in Bedminster, New Jersey.

Trump says illegal immigration fosters crime and implemented a “zero tolerance” policy in May to prosecute all immigrants apprehended for entering illegally. That led to the separation of more than 2,000 children from their parents, causing an outcry this month, even from some allies of the Republican president.

In a rare retreat on an issue that fires up his conservative base, Trump issued an order to officials on June 20 to detain families together.

Thousands of protesters in New York marched across the Brooklyn Bridge bearing signs with slogans like “Make America Humane Again” and “Immigrants Are Welcome Here.” On the U.S.-Mexico border, demonstrators partially blocked a bridge connecting El Paso, Texas with Ciudad Juarez in Mexico.

In Chicago, thousands gathered to march toward the offices of federal immigration authorities.

“I’m here because families belong together,” said Cindy Curry of Westchester, Illinois. A federal judge has ordered families be reunited and the administration asked the military to house immigrant families, leading the Pentagon to mull the construction of soft-sided camp facilities.

Organizers estimated 30,000 people had gathered in central Washington. The peaceful protest appeared to be the largest pro-immigration demonstration in the U.S. capital since at least 2010, when activists rallied to pressure then-President Obama and Congress to overhaul the U.S. immigration system.