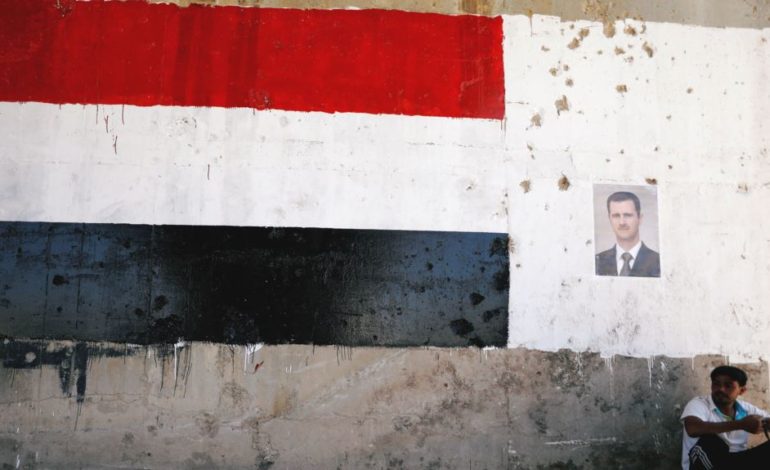 A man sits near a poster of Syrian President Bashar al-Assad during the re-opening of the road between Homs and Hama in Talbisi, Syria June 6, 2018. - REUTERS

BEIRUT – Syrian military air defenses struck an Israeli warplane and shot down Israeli missiles targeting the T4 air base in Homs province in response to an act of “aggression” on Sunday night, Syrian state media said.

An Israeli military spokeswoman said Israel does not comment on foreign reports.

Israel has grown deeply alarmed by the expanding clout of its arch enemy Iran during the seven-year war in neighboring Syria.

Damascus, as well as its allies Iran and Russia, blamed Israel for an April 9 air strike on the same Homs base, an attack that killed seven Iranian Revolutionary Guards Corps (IRGC) members. Tehran vowed at the time to respond.

“Our air defense systems thwarted an Israeli aggression and brought down a number of missiles that were targeting the T4 airport,” it cited a military source as saying.

The air defenses hit one of the “attacking planes and forced the rest to leave” Syrian air space, it added.

In May, Israel said it attacked Tehran’s military infrastructure in Syria, accusing Iranian forces of firing rockets at the Israeli-occupied Golan Heights, in the most extensive military exchange between the two foes.

An Israeli-Iranian showdown also flared over Syria in February, when Israel said an armed drone coming from the T4 base penetrated its air space. Israel blew up the drone and carried out a raid on Syrian air defenses, in which one of its F-16 jets was downed.