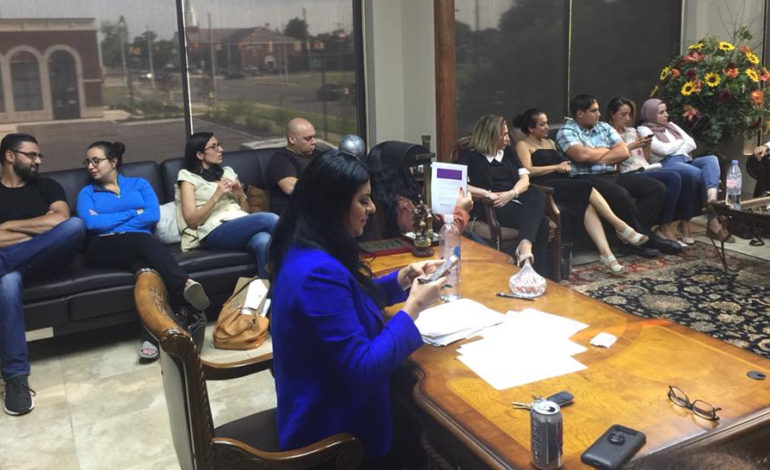 AAPAC members deliberating and voting on endorsements on Wednesday, July 11. - Photo by The AANews

DEARBORN – Several key races are brewing that could alter the course municipalities and the state are taking as they face challenges like improving public education, fixing dilapidated infrastructure and lowering insurance premiums.

After a passionate debate on Tuesday, July 11, The Arab American Political Action Committee (AAPAC) endorsed candidates for governor, Macomb County Circuit Court, the State House and Senate, the U.S. Congress and the Wayne County Commission. Its members sought to give young and new candidates an opportunity to bring about change and to bring Arab American issues to the table in local and state governmental institution.

Formed in 1998, AAPAC’s membership consists of Arab American professionals who volunteer their time and donate their hard-earned money to organize and encourage Arab American political engagement. According to AAPAC’s bylaws, members may only consider candidates who have requested an endorsement from the organization in writing. Those who have already been interviewed for consideration during past elections do not necessarily need to undergo second evaluations. However, candidates need to get the nod of approval by two thirds of the members in good standing who are voting on the endorsements in order to get the organization’s support.

AAPAC did not choose to back any judge for the Michigan Supreme Court at this time, because their races won’t appear until the general election in November. Members also did not endorse candidates for judge in the Wayne County Circuit Court and in Dearborn’s 19th District Court, because the majority are running unopposed, including newly appointed judge Mariam Bazzi. Also, there will be no primary race for the only three open seats on the Wayne County Circuit Court due to the fact that only six candidates have filed their petitions, which means the voters will choose three of the candidates in the general election in November.

In April, the Michigan Democratic Party nominated Dana Nessel for attorney general and Jocelyn Benson for secretary of state. They’ll advance to the November general elections to face off against their respective Republican Party nominees, who’ll be determined in the August primary.

Next week, AAPAC members will meet again to endorse candidates in several other races.

“The process was transparent and democratic,” Mona Fadlallah, AAPAC’s president, told The AANews. “There were heated debates surrounding some races, but each endorsed candidate had to receive a two-thirds vote from members.” El-Sayed, a 33-year-old progressive of Egyptian background, was the director of Detroit’s health department —  and the youngest health commissioner in the country — from 2015 until his resignation in February 2017 to focus on his run for the seat. His message is focused on change and looking out for the defenseless, particularly regarding the environment, education and the economy.

If elected, El-Sayed would make history as the nations’s first Muslim governor.

In the 11th District race, the organization chose to back Fayrouz Saad, the daughter of Lebanese immigrants. She was the former director of Detroit’s Office of Immigrant Affairs. Her campaign focuses on fighting for progressive solutions.
In 2009, President Obama appointed her to the Department of Homeland Security’s Office of Intergovernmental Affairs. There, she worked as a liaison between the immigrant population and the government and worked on issues regarding cybersecurity, national security and law enforcement. The district includes Birmingham, Bloomfield Hills, Troy, Novi, Livonia and Plymouth, among other cities.

Dingell is also a member of the state’s congressional delegation. She has worked to push for trade deals that help Michigan workers, promote the auto industry and protect environmental resources as well as senior citizens.

The district includes Dearborn, Allen Park, Ann Arbor and Ypsilanti, among other cities.

In the 13th District, AAPAC endorsed Rashida Tlaib, a former state representative in Detroit and the daughter of Palestinian immigrants. Tlaib grew up in Detroit as the eldest of 14 children. She fought for working families as a public interest lawyer and led a national civil rights campaign against bigotry.

in the Fourth District, which includes Hamtramck and portions of Detroit, AAPAC is backing Hamtramck City Councilman Saad Almasmari, who is of Yemeni descent.

In the Ninth District, which includes portions of Dearborn and Detroit, the group endorsed Democrat Karen Whitsett. She is running to replace Sylvia Santana, who is seeking a seat in the state senate.

AAPAC backed State Rep. Abdullah H Hammoud (D-Dearborn), a Lebanese American, in his run for re-election in the 15th District, which includes the majority of Dearborn.

For the state senate, AAPAC endorsed candidates in the Third, Fifth and Seventh Districts.

In the Fifth District, which includes portions of Dearborn Heights, Detroit, Garden City and Inkster, AAPAC endorsed State Sen. David Knezek (D-Dearborn Heights), who is running to retain his seat for a second term.

The primary elections will be held on Tuesday, August 7. Only registered voters can cast their vote. Polls open at 7 a.m. and close at 8 p.m.

Voters can only cast their votes for candidates in one party. Crossing parties is not permitted in the primary election and will render such a vote invalid.

For more information on AAPAC endorsements visit its website at www.aapac.org and /or its Facebook page: @aapacMI