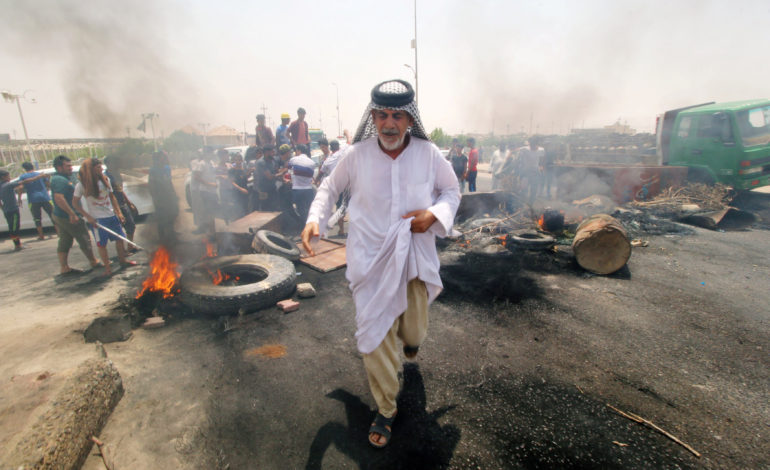 Iraqi protesters burn tires and block the road at the entrance to the city of Basra, Iraq July 12, 2018. - REUTERS

BASRA, Iraq — Iraqi police fired into the air to disperse protesters demanding jobs and better public services at one of three demonstrations outside major oilfields in the southern oil hub of Basra on Thursday, police sources said.

Two protesters were wounded, police and hospital sources said, without elaborating, after the incident near an entrance to the giant West Qurna 2 oilfield, run by Lukoil. Iraqi protesters burn tires and block the road at the entrance to the city of Basra, Iraq July 12, 2018. REUTERS

Local workers said around 10 protesters managed to briefly enter a crude separation facility before police pushed them back. An angry crowd set fire to a caravan used by police, said two policemen at the scene.

The unrest did not impact production at West Qurna 2 or the other two fields, West Qurna 1 and Rumaila, two oil officials said.

Iraq’s oil ministry later issued a statement saying that production at West Qurna 2 was proceeding normally and that security forces were in control of the situation near the oilfields.

“Why should young men from Basra beg for jobs while oil companies are hiring foreign workers?” – Protest organizer Falih al-Darraji

Oil exports from Basra account for more than 95 percent of OPEC producer Iraq’s state revenues. Any potential disruptions to production could severely impact the economy.

Tensions over basic services come at a sensitive time when Iraqi political blocs are attempting to form a coalition government after a May 12 parliamentary election tainted by allegations of fraud.

Easing hardship will not be easy. Iraq needs tens of billions of dollars to rebuild after the U.S.-led invasion in 2003 and the war against ISIS.

“We want jobs, we want to drink clean water, and electricity,”  Husam Abdul Ameer, 25, an unemployed college graduate from Basra told Reuters. “We want to be treated like human beings and not animals.”

Prime Minister Haider al-Abadi has ordered a ministerial committee to look into the protesters’ demands.

About 70 people gathered near a joint entrance leading to the key oilfields of Rumaila, operated by BP, and West Qurna 1, run by Exxon Mobil, said police officers in charge of protecting the oilfields perimeters.

Some called on foreign companies to create jobs.

“Why should young men from Basra beg for jobs while oil companies are hiring foreign workers?” protest organizer Falih al-Darraji told Reuters. “That’s unfair and should stop, otherwise we will not only demonstrate near the oilfield but will break in.”

Some local officials said the complaints were justified.

“Protesters have fair demands and they are peaceful so far, said Faris Shaddad, the head of energy panel of Basra provincial council. “If the government does not respond quickly, we fear things will get out of control in Basra.”

Other protesters gathered at a main road to the east of Basra that leads to a border crossing with Iran, preventing trucks from moving, custom officials said.