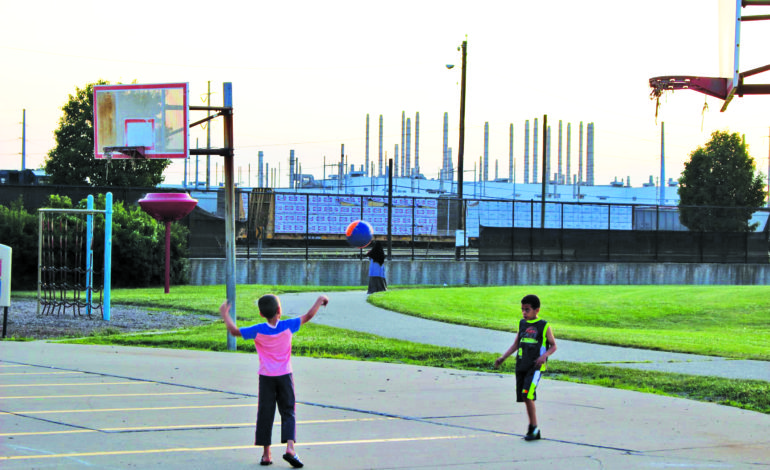 Boys at play at Salina Elementary School, across the street from a power plant in Dearborn's Southend - Photos by The AANews

DEARBORN — Residents concerned that large factories in the city’s industrial Southend are worsening air quality are turning to the City Council, in hopes it would enact ordinances to more immediately force the corporations to commit to environmentally friendly practices.

At a town hall co-costed by the Michigan Department of Environmental Quality’s Air Quality Division and State Representative Abdullah Hammoud (D-Dearborn) at Salina Intermediate School on Wednesday, community members reiterated their lack of trust that the entity has their best interest in mind when deciding on approving permits submitted by the factories asking to make installments or modifications that would increase emission levels. They also called for more accountability and transparency about how the agency handles public health concerns.

“How are they going to increase pollution in the area when its already so polluted,” local resident and activist Adel Mozip told The AANews at an air monitoring site at Salina. “Some people have lost hope because almost every permit comes before the DEQ.”

In late March, a large crowd at an MDEQ public hearing opposed a recently approved permit requested by DTE to add new natural gas-fired turbines to be constructed at one of Ford Motor Company’s research and development centers. A month earlier, MDEQ allowed Dearborn Industrial Generation (DIG) to increase emission levels of formaldehyde, a toxic carcinogen, but the power plant rescinded its request due to heavy public concerns.

“We don’t have the authority to restrict or limit a facility’s emissions or activities, unless we find written standards or rules.” – Jeff Korinski, MDEQ Detroit office assistant supervisor

But at the town hall, meant to improve relationships and the information gap between the community and the MDEQ, Air Quality Division officials stressed that they don’t hold much power in rejecting permits if the polluters are complying with state and federal standards.

“Our authority is not all inclusive,”said Jeff Korinski, assistant supervisor at the Detroit office. “We don’t have the authority to restrict or limit a facility’s emissions or activities, unless we find written standards or rules that the EPA or our section has developed.” He said the MDEQ’s ability to control emissions are limited and depend on the actual working of standards of the pollutants. He also said it’s often unclear how far the agency’s reach is until a court ruling. Korinski added that his department conducts about 150 compliance inspections in Wayne County annually, while there are more than 4,000 sources of pollutants.

“For the governor to sign this is a slap in the face of every resident. It shows that the lobbyists put their greed over the lives of the people in lower Wayne County.” – Theresa, concerned resident

To make matters worse, Governor Snyder appointed an 11-member oversight committee of industry stakeholders that would oversee the MDEQ and have the power to hear permit appeals, a move many Michiganders and legislators say essentially allows the corporations to regulate themselves.

Hammoud was quick to defend the MDEQ and the tough position it sits in, between following guidelines and upholding environmental justice, and urged people to turn their attentions to Lansing.

“The DEQ today does not have the authority to uphold the regulations to standards that are acceptable, frankly,” he said. “That’s not these individuals’ faults, but it’s something they have to deal with.”

Audience members were enraged that the new committee meant the department would be rendered powerless.

“For the governor to sign this is a slap in the face of every resident in Michigan,” said Theresa, a concerned resident. “It shows me that the lobbyists that have the money put their greed over the lives of the people who are impacted in lower Wayne County.”

She added that the MDEQ would lose its permitting process powers, won’t be the ones setting the regulations and would take the state, “back to the 50s and early 60s when there were no regulations at all.”

“I support the MDEQ, but you need more power, a larger budget, more people and larger staff that specializes in air quality and water quality,” she said. Craig Fitzner, MDEQ’s assistant division director, said the department and its legislative liaison are working with the governor’s office to better understand what MDEQ’s authority is, but that he has no concrete idea of how the law would affect it.

“We’re working out on ironing out what those gray areas are, but right now we just don’t have a good assessment of how they’ll impact us,” he said.

Along with six of his colleagues, Hammoud introduced a package of bills in June that addressed air quality reforms that focus on environmental justice, transparency, accountability, local control and expanding permit criteria.

Hammoud’s bill (HB 6143) requires the MDEQ to take into consideration the cumulative air quality impact when considering permits, instead of only considering the potential impact of the emissions source in question.

“We want to increase transparency regarding permit requests,” Hammoud told The AANews. “Not only consider the corporate entity’s pollution, but the entire regions pollution level.”

Acknowledging their limits, Korniski pointed out that local governments are able to set their own standards and pass their own laws prohibiting harmful industrial practices, leading to a, “more localized approval process.”

For example, last October, the Detroit City Council passed an ordinance regulating the handling and storage of pet coke, a byproduct of petroleum refining. At the southwest Detroit refinery, dust from 30-foot piles of pet coke stored by a company along the Detroit River was blowing onto the water and neighborhoods.

He added that Michigan is unique in that its many government entities are more centralized than in many other states. Residents also wanted the MDEQ to factor in more ambient air monitoring, in addition to the monitoring of areas that detect pollution levels close to an emissions source.

Salah Khalid, an electrical engineer for a local auto manufacturer, told The AANews that a major concern in the neighborhoods is the transportation of red-hot steel slabs 12 to 20 feet long and six to 12 inches in diameter that are stacked onto an AK Steel eighteen-wheeler. The hot slabs emit “huge smokes” that cause visibility restrictions and release toxins into the air.

Khalid said he filed a complaint with the MDEQ, but it responded that it does not regulate such emissions.

“So, now we’re turning to our city government officials to see if they can implement some ordinances to prevent issues from escalating,” he said.