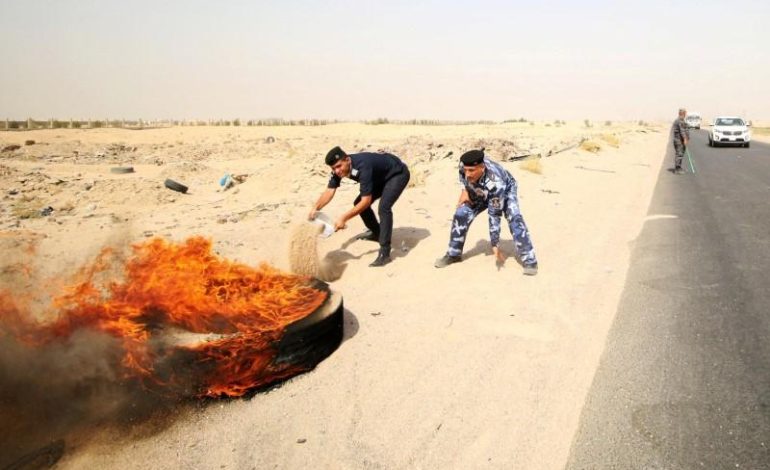 Iraqi policemen threw sand to put out the fire that the protesters had set ablaze, during a protest at the main entrance to the giant Zubair oilfield near Basra, Iraq, July 17 - Reuters

BASRA, Iraq — Iraqi police wielded batons and rubber hoses to disperse about 250 protesters gathered at the main entrance to the Zubair oilfield near Basra on Tuesday as unrest across southern cities over poor basic services gathered pace.

Since demonstrations began nine days ago, protesters have attacked government buildings, branches of political parties and powerful Shi’a militias and stormed the international airport in the holy city of Najaf.

Tensions focused attention on the performance of Prime Minister Haider al-Abadi, who is seeking a second term after the May 12 parliamentary elections tainted by allegations of fraud that prompted a recount.

In his weekly news conference on Tuesday, Abadi promised to work with protesters to fight corruption and said the government would improve services.

Officials and industry sources said the protests have not affected output at Zubair, run by Italy’s Eni, and the other major oilfields, including Rumaila, developed by BP, and West Qurna 2, managed by Lukoil.

Many Iraqis believe their leaders do not share the country’s oil wealth. Some demonstrators said foreign laborers were robbing them of employment at oil companies.

Three protesters have been killed in clashes with police, including one at West Qurna 2, and dozens wounded. Dozens of policemen were also injured.

“We the people of Basra hear about the Iraqi oil and its huge revenues, but we never enjoy its benefits,” said 24-year-old protester Esam Jabbar.

“Strangers have decent jobs at our oilfields and we don’t have the money to pay for a cigarette,” Jabbar said. “That’s wrong and must be stopped.”

Jabbar also said he was unemployed.

At the gate of Zubair field, police beat protesters on their backs and legs with batons and rubber hoses, witnesses said.

Blood ran down one policeman’s face after protesters hurled stones. Policemen also threw sand to put out tires that the protesters had set ablaze.

Iraq is the second-largest producer in the Organization of the Petroleum Exporting Countries after Saudi Arabia.

Crude exports account for 95 percent of state revenue and any disruptions could badly damage its already limping economy at a time when Iraq needs tens of billions of dollars to rebuild after the three-year war with ISIS.

Prolonged instability in the south could drive up global oil prices. Production at the Zubair field was 475,000 bpd, an Iraqi oil official said in May.

Iraq exported an average of 3.566 million barrels per day from its southern oilfields so far in July, said senior oil officials, levels confirming that the troubles have not disrupted crude shipments from the region.

Demonstrators, who have endured sweltering heat to press their demands, show no sign of letting up. They have vented anger in Basra, the biggest city in the south, Samawa, Amara, Nassiriya, Najaf, Kerbala and Hilla.

“We will not allow anyone to tamper with security and order by encroaching on public, private and government institutions and also economic institutions,” military spokesman Brigadier General Yahya Rasool told a news conference.

Politicians are struggling to form a coalition government. Populist Shi’a cleric Moqtada al-Sadr, whose political bloc won the majority in the poll, may now be in a stronger position to influence the choice of prime minister.

He defeated Iranian-backed rivals by promising to generate jobs, help the poor and eradicate corruption.

The Shi’a heartland south has long been neglected despite its oil wealth, first by Sunni dictator Saddam Hussein and then by Shi’a-led governments after him, including Abadi’s.

Fetid piles of garbage can be seen on many Basra streets. Stagnant water with sewage has caused health problems and tap water is sometime contaminated with mud and dust. Electricity is cut off for seven hours a day.

Murtadha Rahman, 22, ran barefoot on the scorching pavement to try to escape a charge by police outside the Zubair field.

“I live in a place which is rich with oil that brings billions of dollars while I work in collecting garbage to desperately feed my two kids,” said Rahman, who said he was beaten by police. “I want a simple job, that’s my only demand. I won’t go even if you kill me I will stay here. I want a job.”