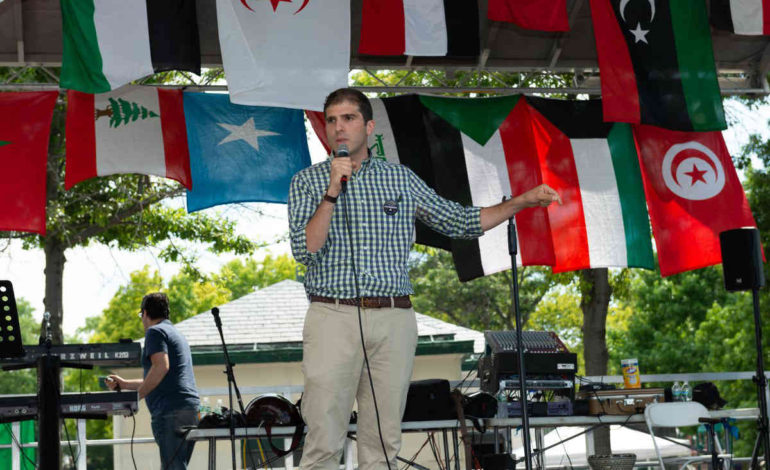 Attendees enjoyed a wide variety of regional foods and entertainment, with many dressed in traditional outfits from countries such as Egypt, Syria, Morocco, Palestine and Yemen among others. The event was scheduled to begin at noon, but due to an unexpected rain delay, the festivities didn’t start until after 2 p.m. But the heat and humidity didn’t stop thousands of attendees from stopping by to celebrate the culture and heritage of the Arab Americans throughout the borough.

It was a day of family fun featuring musical performances from across the Arab world, with food vendors, henna artists, calligraphists, and vendors selling artifacts, t-shirts, jewelry, hijabs and other fashion accessories. There were also plenty of activities for kids to enjoy. “I was proud to join our vibrant Arab American community at the 12th annual bazaar, celebrating culture in all its forms and connecting residents with important services and assistance,” Treyger said. “Arab Americans have made significant contributions to our community, our city, and our country. Now more than ever, it’s critical that we support our immigrant communities and small businesses, and I commend the Arab American Association of New York for all their work toward those ends.”

Andrew Gounardes, counsel to Brooklyn Borough President Eric Adams and candidate for the state Senate, spoke about the need to protect immigrant rights and keep ICE out of the courts.

“It was wonderful to join my friends and neighbors at this year’s event,” Gounardes, told Brooklyn Eagle. “The Arab American Bazaar has grown to become one of Bay Ridge’s most fun and cherished events. Our Arab American community enriches Bay Ridge’s rich multicultural legacy in so many ways.”

He added that “dangerous anti-immigrant rhetoric coming out of Washington has no place in Bay Ridge.” “I’m lucky to represent one of the largest Arab American communities in the country right here in Brooklyn and I look forward to the Arab American Bazaar every summer,” Brannan told Brooklyn Eagle. “It’s become another great Bay Ridge tradition. Come for the Egyptian hip-hop and stay for the Maghrebi mint tea. It’s a great day of celebrating Middle Eastern arts, food, culture and the diversity that brings us all together and makes us stronger.”

“I am so glad to have attended and shown my support for the 12th Annual Arab American Association of New York’s Bazaar held on Shore Road,” Said Golden. “It was indeed a grand celebration of music, food and culture, and it is important that, as a son of Irish immigrants, we have events that showcase the many parts of the world from which our neighbors come.”

Joudeh was very pleased with the large turnout at the event. “The Arab American Bazaar on Sunday was a very successful event for our community,” Joudeh said. “I would like to thank everyone who attended including our sponsors and our politicians including Sen. Marty Golden and Councilmembers Justin Brannan, Jumaane Williams and Mark Treyger, who came and spoke to our event.”