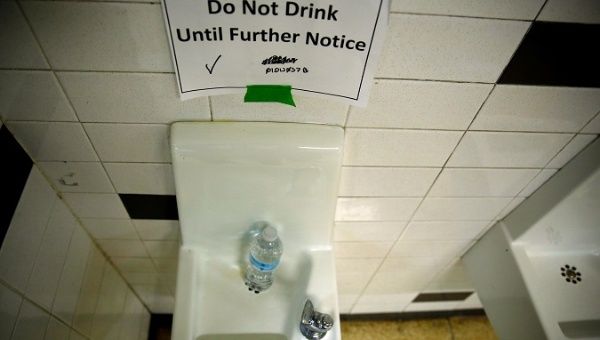 A sign which reads 'Do Not Drink Until Further Notice' appears next to a water dispenser at North Western high school in Flint, May 4, 2016 - Reuters

WASHINGTON, D.C. — The U.S. Environmental Protection Agency was slow and ineffective in its response to the 2014 water crisis in Flint, Michigan, and needs to improve its communications with state and local regulators when citizen complaints arise, its internal watchdog said on Thursday.

The EPA inspector general said in a 74-page report that the agency’s Midwest region 5 office, headquartered in Chicago, failed to use many of the authorities it had under federal drinking water law as residents consumed contaminated water.

“While Flint residents were being exposed to lead in drinking water, the federal response was delayed, in part, because the EPA did not establish clear roles and responsibilities, risk assessment procedures, effective communication and proactive oversight tools,” the report said.

Flint, a working class city north of Detroit with a population of 100,000 that is mostly African American, switched its drinking water supply from Lake Huron to the Flint River in April 2014 to cut costs. The corrosive river water caused lead, which stunts the neural development of children, to leach from pipes.

The city switched back to Lake Huron water in October 2015, but the contamination continued. The water crisis prompted dozens of lawsuits and criminal charges against former government officials. It was also linked to an outbreak of Legionnaires’ disease that caused at least 12 deaths.

The report said the EPA’s Midwest office responded to citizens’ complaints that the water was off color, malodorous or contained contaminants, including lead, with form letters that recommended that citizens take their concerns to city and state regulators. In 11 instances, the inspector general found no EPA responses to the complaints.

The inspector general report urged EPA to establish a “clear and credible” escalation policy for agency intervention in states. “The policy should provide steps the EPA will take when states do not act,” it said.

In addition, it urged the agency to create a system that tracks citizen complaints and gathers information on emerging issues.