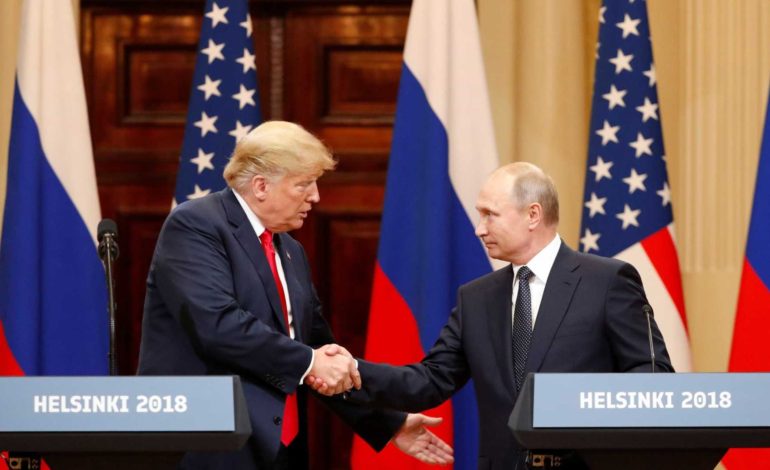 WASHINGTON, D.C. — The Senate has overwhelmingly approved a resolution against allowing Russia to question former U.S. ambassador Michael McFaul or other U.S. officials. It was a formal rebuke to President Trump, who touted the offer at the Helsinki summit with Russian President Vladimir Putin.

Trump faced outrage on Tuesday for his failure to hold Russia accountable for meddling in the 2016 U.S. election.

Senate Majority Leader Mitch McConnell hastily arranged the vote on the nonbinding resolution after Democrats proposed the measure in response to what Trump had called Putin’s “incredible offer.”

Putin offered to allow the U.S. to question 12 Russians accused of interfering in the 2016 election in exchange for permitting Russia to interview Americans the Kremlin accuses of unspecified crimes.

Facing a backlash of bipartisan criticism, the White House on Thursday said Trump “disagrees” with Putin’s offer. That statement came moments before the Senate vote.

Senators voted 98-0, with all Democrats and most Republicans supporting the resolution.

At a joint news conference with Putin after the summit, Trump stunned politicians back home by shying away from criticizing the Kremlin for Moscow’s efforts to undermine the election, contradicting the findings of American intelligence agencies.

Trump, whose summit with Putin concluded a week-long Europe trip that included a NATO meeting and talks with British Prime Minister Theresa May, pushed back on Tuesday at the storm of criticism, blaming media coverage.

“While I had a great meeting with NATO, raising vast amounts of money, I had an even better meeting with Vladimir Putin of Russia,” he tweeted. “Sadly, it is not being reported that way – the Fake News is going Crazy!”

The condemnation for his performance at the Helsinki news conference, including from many fellow Republicans, matched or eclipsed previous controversies in Trump’s turbulent 18 months in office.

“The president needs to understand he has damaged U.S. foreign policy,” Representative Mike Turner, a Republican on the House Intelligence Committee, told CNN. “He’s given them a pass and is certainly not holding them accountable for what they’re doing.”

Democratic Senator Chuck Schumer, who was one of the legislators who proposed the resolution, celebrated its success on Twitter.

“Today the Senate came [together] in a bipartisan way to declare what should have already been obvious – it’s neither the policy nor the practice of the United States to submit our citizens, let alone our Ambassadors like former Amb. [McFaul], to the interrogation of a foreign adversary,” he tweeted.

U.S. intelligence agencies concluded last year that the Russian government interfered in the 2016 election campaign and sought to tilt the vote in Trump’s favor, something Moscow has long denied. Special Counsel Robert Mueller is probing that allegation and any possible collusion by Trump’s campaign.