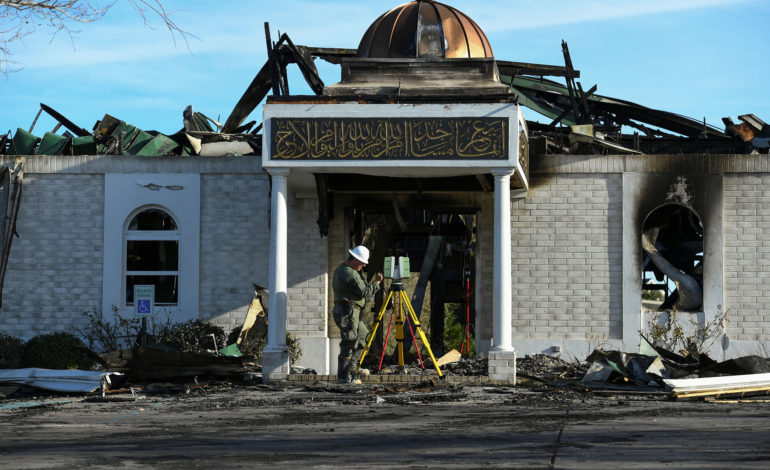 A security official investigates the aftermath of a fire at the Victoria Islamic Center mosque in Victoria, Texas, on Jan. 29, 2017 - Reuters

VICTORIA, Texas — A Texas man was found guilty this week of a hate crime in the burning of a local mosque in January 2017, an attack that a rights group connected to an increase in anti-Muslim incidents in the United States, on Wednesday.

Marq Vincent Perez, 26, was also found guilty on Monday by the jury in Victoria, Texas, of using a fire to commit a felony and possessing an unregistered destructive device for a separate incident, the U.S. Justice Department said in a statement on the case.

The fire destroyed the Victoria Islamic Center and caused about $500,000 in damages, according to the U.S. Bureau of Alcohol, Tobacco, Firearms and Explosives. Victoria is about 125 miles southwest of Houston.

Perez could serve up to 20 years in prison for the hate crime conviction and 10 years each for the other two crimes, along with a maximum fine of $250,000, according to the Justice Department.

He intends to appeal the conviction, CNN reported.

The Council on American-Islamic Relations (CAIR) found a 15 percent increase in the number of anti-Muslim hate crimes from 2016 to 2017 in the United States, according to a 2018 report. CAIR-Houston Executive Director Mustafaa Carroll said the Victoria mosque burning was part of this increase and called the conviction “a step in the right direction.”

During Perez’ trial, witnesses said he had made derogatory statements about Muslims and “hate-filled messages” were found on his Facebook account, the Justice Department said. Witnesses also described how Perez planned the attack and appeared elated on the night of the fire, “jumping up and down like a little kid.”

Authorities found items burglarized from the mosque at Perez’ home, as well as a homemade explosive device they said resembled one used in an attempted car bombing two weeks before the mosque burning.