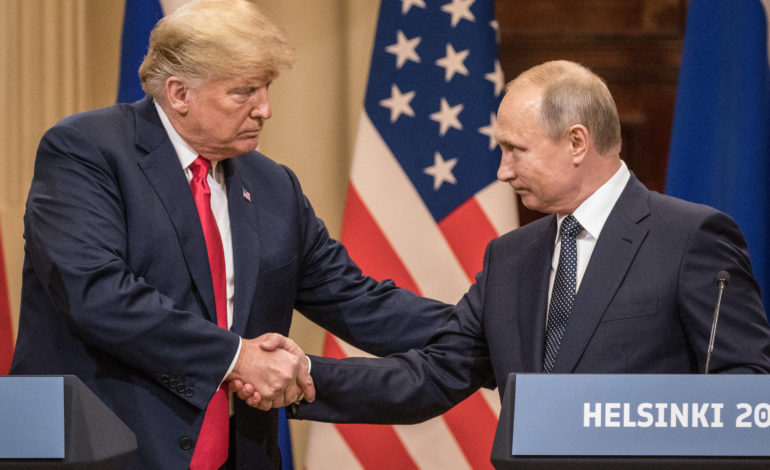 For nearly 80 years the U.S. and Russia (or the former Soviet Union) have held summits.  In each case, it has been a forum for domestic political debate.  The president’s supporters always say the summit took solid steps towards peace and understanding, even while the president remained forceful and unyielding.  Meanwhile, the president’s opponents said the summit was a disaster that only encouraged Russian aggression.

Strip away the words and we see the same thing this summit.  The commentary has run from praise of new cordial relations with Russia to accusations of treason.

The most critical anti-Trump comment came from former CIA Director John O. Brennan, who tweeted, “Donald Trump’s press conference performance in Helsinki rises to & exceeds the threshold of ‘high crimes & misdemeanors.’ It was nothing short of treasonous. Not only were Trump’s comments imbecilic, he is wholly in the pocket of Putin. Republican Patriots: Where are you??? At what point can a person like this be arrested for sedition?”

On the other hand, conservative commentator Rush Limbaugh said of the press conference, “The United States media regularly beclowns itself, makes fools of themselves…It’s amazing to me to watch the right-before-before-our-eyes decline of the stature, the respect, the integrity and the perceived intelligence of members of the United States White House or presidential press corps. This is just… I don’t know. I have all kinds of mixed emotions watching it. I go through the anger. But I can’t stay angry very long because I can’t stop laughing at this.”

Throughout this summit, Trump’s posture toward Putin has been gentle and respectful — even deferential. Contrast this with his posture toward Trudeau, Merkel, May and their like.

While Russia isn’t the clear and present danger that the Soviet Union posed, most would agree that the EU isn’t the threat that Russia is.

Trump critics asserted that he was also loath to point out any of Russia’s human rights violations. To them, Putin’s Russia is a dictatorship that kills critics, violates borders, interferes in democratic elections, etc.

When President Trump tweeted, “Our relationship with Russia has NEVER been worse thanks to many years of U.S. foolishness and stupidity and now, the rigged witch hunt,” Russian foreign ministry responded, “We agree.”

That should give the Trump administration something to think about.

Then at his press conference with Putin, he was asked whether Russia bore any responsibility for bad relations between Moscow and Washington. Trump said, “I hold both countries responsible. I think that the United States has been foolish. I think we’ve all been foolish.” And a bit later: “I think we’re all to blame.”

Republicans usually criticize Democrats for comments like that, calling them “moral equivalence.”

Trump, at his joint press conference with Putin, was asked whom he believed, Putin or the U.S. intelligence community. He answered, “My people came to me — Dan Coats came to me, and some others. They said they think it’s Russia. I have President Putin — he just said it’s not Russia. I will say this: I don’t see any reason why it would be.”

The press conference also touched on other things.  Asked point-blank if he had collected “compromising material” on President Trump when Trump traveled to Moscow for the Miss Universe pageant in 2013, Putin said he wasn’t even aware of Trump’s visit at the time and that there were hundreds of American business luminaries in town at the same time. Collecting information on all of them would have been impossible, Putin said. Trump added that if Russia did have the long-rumored kompromat, “It would have been out long ago.”

The politics of the summit

The strange thing about this is that Republicans have noted that Trump has excellent people around him — many of conservatism’s best and brightest.  General H.R. McMaster was one of them. Trump has John Bolton, James Mattis, Dan Coats, Mike Pompeo, et al.

This summit has reinforced the belief that there seem to be two administrations when it comes to U.S. policy on Russia: President Trump — and the rest of the administration. This idea was spelled out in a New York Times article titled, “Trump Opens His Arms to Russia. His Administration Closes Its Fist”

Of course, this soft talk towards Russia isn’t unusual for American presidents.  When Obama first met Putin, he said, “I’m aware of not only the extraordinary work that you’ve done on behalf of the Russian people … as president, but in your current role as prime minister,” during a breakfast meeting at Putin’s country home on the outskirts of Moscow. “We think there’s an excellent opportunity to put U.S.-Russian relations on a much stronger footing.”

Then there was the hot mike that captured Obama telling Medvedev that he (Obama) would be freer to help Russia once the presidential elections were over.

Republicans likes to point out that nor were Obama’s actions any stronger.  They claimed that he gave Russia a free hand in Georgia, a free hand in Syria, made Poland more vulnerable to Russia by abrogating the missile shield deal, refused to give more powerful weapons to the Ukraine, allowed Russia’s ally to advance its nuclear deal and ignored the Russian election tampering for which the U.S. media is blaming Trump.

Another aspect of this summit is the domestic political aspect of it.  On Friday, Special Counsel Robert Mueller returned a multi-count indictment charging 12 Russians and the Russian military agency, GRU, with crimes related to hacking into the Democratic National Committee’s computers and seeking to use the information to influence the 2016 U.S. presidential election.  This was a politically timed indictment meant to disrupt the Trump/Putin summit, especially since the indictment has little evidence and could fall apart in court just as the last Muller indictment of Russians did.

What that indictment did was only make headlines.  But it will not be tried.  Deputy Attorney General Rod Rosenstein basically said that no trial would take place when he said the Justice Department, will now “transition responsibility for this case to our Department’s National Security Division while we await the apprehension of the defendants.”

Since Russia doesn’t extradite its citizens, it is clear that will never happen.

Politically, transferring it back to the Justice Department, it’s going to be buried in the bureaucracy since the national security division deals with counterintelligence matters. And there are never public trials in counterintelligence procedures.  That allows it to be used in a political campaign against Trump, without ever having to prove the Russians were guilty – something hard to do since the FBI never got custody of the DNC computers.

So, what does the summit mean?  It was the first substantive meeting between the two biggest nuclear powers – something that helps lessen any misunderstanding between the two.  However, much of that was lost in the media circus that followed.

As usual, the usual opponents of Trump, ranging from Democratic leaders to the terminally ill Sen. John McCain (R-AZ) found problems with it, just as Nixon’s opponents said he sold out the U.S. to the Soviet Union.

Although Trump was soft and non-confrontational with Putin in Helsinki, his actions elsewhere have made it clear that there are boundaries that Russia can’t cross without American response.

Consequently, the biggest impact will be domestically.  There is no indication that Trump’s supporters will lose faith in him, despite the wave of criticism coming from some corners.  Talk of “Trump treason” will only harden the political positions of his base when voting.

What we are seeing in the U.S. is a nearly even split in political positions.  While some (about 50 percent) are calling Trump a traitor, about 50 percent think he is on the right track.  And, increasing the volume that Trump is a traitor or incompetent will not change that.

In the end, the differing interpretations of the Trump-Putin summit will play out on America’s streets.  Calling a national leader a traitor can only encourage those who favor overthrowing him, no matter the costs.

Over the last few weeks, there has been a growing number of violent confrontations between Trump and anti-Trump supporters.  We can expect that to only grow.

– Center for American and Arab Studies.