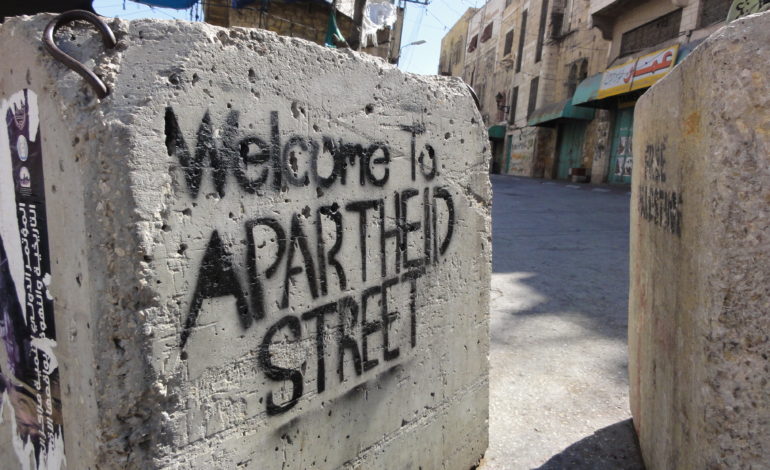 Shuhada Street, also known as Apartheid Street, which seperates Palestinians from Jews in the West Bank's Hebron - Photo by gettingoffthearmchair.wordpress

The head of the Arab Joint List Alliance at the Israeli Knesset (Parliament), Aymen Odeh, described the passing of the racist Jewish nation-state law as “the death of our democracy.”

Did Odeh truly believe that, prior to this law, he had lived in a true democracy? Seventy years of Israeli Jewish supremacy, genocide, ethnic cleansing, wars, sieges, mass incarceration and numerous discriminatory laws, all aimed at the very destruction of the Palestinian people, should have given enough clues that Israel was never a democracy to begin with.

The Jewish nation-state law is merely the icing on the cake. It simply gave those who argued, all along, that Israel’s attempt at combining democracy with ethnic supremacy was racism masquerading as democracy the munition they needed to further illustrate the point.

There is no escaping the moral imperative now. Those who insist on supporting Israel must know that they are supporting an unabashed Apartheid regime.

The new law, which was passed after some wrangling on July 19, has divorced Israel from any claim, however untrue, to being a democratic state.

In fact, the law does not mention the word “democracy” in its wording, not even once. References to the Jewish identity of the state, however are ample and dominant, with the clear exclusion of the Palestinian people from their rights in their historic homeland:

– “The actualization of the right of national self-determination in the state of Israel is unique to the Jewish people.

– “The state will act to preserve the cultural, historical and religious legacy of the Jewish people among the Jewish diaspora”, and so on.

But most dangerous of all is the stipulation that “the state views Jewish settlement as a national value and will labor to encourage and promote its establishment and development.”

True, illegal Jewish settlements already dot the Palestinian land in the West Bank and Jerusalem; and a de facto segregation already exists in Israel itself. In fact, segregation is so deep and entrenched, even maternity wards in Israeli hospitals separate between mothers, based on their race.

The above stipulation, however, will further accelerate segregation and cement Apartheid, making the harm not merely intellectual and political, but physical as well.

The Legal Center for Arab Minority Rights in Israel, Adalah, has documented in its “Discriminatory Laws Database” a list of more than 65 Israeli laws that “discriminate directly or indirectly against Palestinian citizens in Israel and/or Palestinian residents of the Occupied Palestinian Territory (OPT) on the basis of their national belonging.”

According to Adalah, “These laws limit the rights of Palestinians in all areas of life, from citizenship rights to the right to political participation, land and housing rights, education rights, cultural and language rights, religious rights and due process rights during detention.”

While it would be accurate to argue that the Jewish nation-state bill is the officiation of Apartheid in Israel, this realization should not dismiss the previous reality upon which Israel was founded 70 years ago.

Apartheid is not a single law, but a slow, agonizing build-up of an intricate legal regime that is motivated by the belief that one racial group is superior to all others.

Not only does the new law elevate Israel’s Jewish identity and erase any commitment to democracy, it also downgrades the status of all others. Palestinian Arabs, the natives of the land of historic Palestine upon which Israel was established, did not feature prominently in the new law at all. There was a mere stipulation made to the Arabic language, but only to downgrade it from being an official language to a “special one.”

Israel’s decision to refrain from formulating a written constitution when it was founded in 1948 was not a haphazard one. Since then, it has been following a predicable model where it would alter reality on the ground to the advantage of Jews at the expense of Palestinian Arabs.

Instead of a constitution, Israel resorted to what it termed “Basic Laws”, which allowed for the constant formulation of new laws guided by the “Jewish State’s” commitment to racial supremacy than to democracy, international law, human rights or any other ethnical value.

The Jewish nation-state law is itself a “Basic Law.” And with that law, Israel has dropped the meaningless claim to being both Jewish and democratic. This impossible task was often left to the Supreme Court which tried, but failed, to strike any convincing balance.

This new reality should, once and for all, end the protracted debate on the supposed uniqueness of Israel’s political system.

And since Israel has chosen racial supremacy over any claim, however faint, to real democracy, Western countries that have often shielded Israel must also make a choice on whether they wish to support an Apartheid regime or fight against it.

The initial statement by the EU foreign affairs chief, Federica Mogherini, was lackluster and feeble.

“We are concerned,” Mogherini said while renewing her commitment to the “two-state solution.” “We have expressed this concern and we will continue to engage with Israeli authorities in this context.”

This is hardly the proper statement in response to a country that had just announced its membership in the Apartheid club.

The EU must end its wishy-washy political discourse and disengage from Apartheid Israel or it has to accept the moral, ethical and legal consequences of being an accomplice in Israeli crimes against Palestinians.

Israel has made its choice and it is, unmistakably, the wrong one. The rest of the world must now make its choice as well, hopefully the right one: Standing on the right side of history— against Israeli Jewish Apartheid and for Palestinian rights.