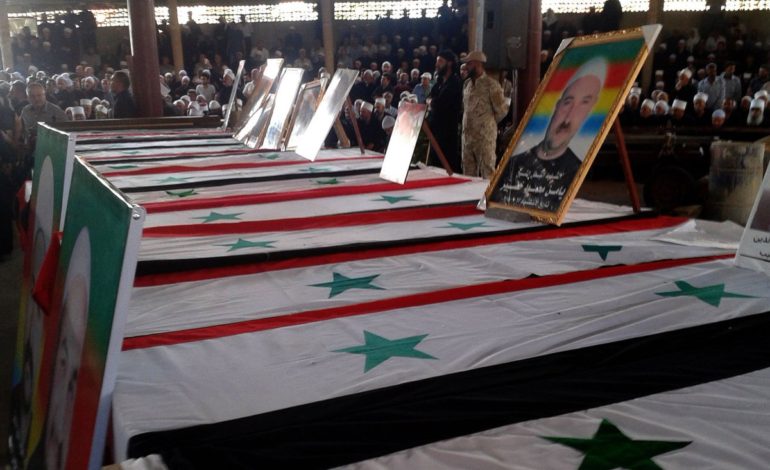 On Thursday, the Syrian city of Sweida buried dozens of its Druze inhabitants who were killed the day before in coordinated massacres carried out by ISIS terrorists. Residents and witnesses said they overran villages and staged multiple suicide attacks inside the city.

They said the attacks that killed more than 200 people— the worst against the majority Druze-inhabited city in southwestern Syria that escaped violence in more than seven years of conflict— sent shockwaves across the Druze community spread in Lebanon, Syria and Israel.

Coffins of victims draped in Syrian flags had been brought from the main city hospital as thousands thronged to pay homage to the victims as the city closed down in mourning.

Anger over Syrian authorities’ perceived failure to avert the dawn attacks pushed residents to prevent the governor of the province, Amer al Ashi, and representatives of the government from attending the funeral. Many residents blamed the authorities for negligence, while others questioned how dozens of ISIS militants could descend from areas declared free of militants and storm seven villages northeast of Sweida city and create mayhem in the city.

Many local vigilante groups set up checkpoints across the city as fears persisted of renewed attacks.

The attack took place as government forces, backed by intensive Russian aerial attacks, battled the militants in an enclave to the west near the Golan frontier and the border with Jordan.

Fueling the anger was a perceived absence of any significant army role when local Druze youths, who rushed to protect civilians in trapped villages confronted the militants, according to two residents.

Many community leaders and top Druze religious leaders’ refusal to sanction enlistment in the army forces had long caused strains with the Damascus authorities.

A Russian military delegation that had recently visited Sweida and asked community leaders to sanction local militias enrollment in a Russian-backed offensive in southwestern Syria to regain rebel held territory had met refusal, a Druze official familiar with the matter told Reuters.

Sweida’s Druze are neighbors to mainly Sunni Deraa province and have long resisted being drawn into the Syrian conflict that pits mainly Sunni rebels opposed to  the Syrian government.

A handful of suicide bombers on motorbikes went on a rampage reminiscent of some of the group’s bloodiest attacks during the height of their power when large swathes of Iraq and Syria was under their control.

One suicide bomber blew himself up in a vegetable market as vendors were arriving to sell their produce while others were killed before they could detonate their bombs in a hospital, in attacks that sent shockwaves across the community.

Residents cite horror stories of families massacred by ISIS terrorists with documented names of at least 20 women and children kidnapped by the militants and others still unaccounted for.

Witnesses said the militants had quietly, at dawn, knocked at doors of homes where they knew names of its occupants in what local villagers suspect was help from local Bedouin.

Several bodies of civilians were found shot in some of the villages that the militants had overrun, they said.