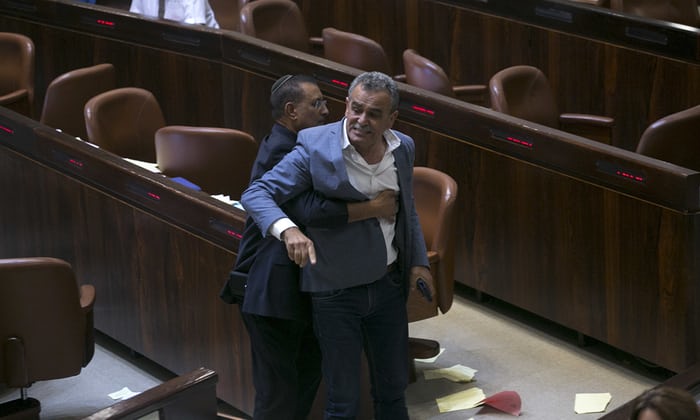 A Knesset usher removes Jamal Zahalka, an Israeli Arab member of the Knesset representing the Balad party, who was protesting the passage of the contentious nation-state bill, during a Knesset session in Jerusalem, July 19 - AP

Since its inception, Israel has been a discriminatory state, posing as a (false) democracy. This is not a matter of opinion; it is a fact and there is plenty of evidence to back it up.

On Thursday, July 19, the Israeli Knesset passed the “Israel as the Nation State of the Jewish People” bill into law, which declares that only Jewish people have the “right to exercise national self-determination in the State of Israel.”

This law has also downgraded Arabic from its designation as an official language to one with “special status.” Furthermore, it declares that the development of Jewish settlement is a “national value” and that the state will act to “encourage and promote its establishment and consolidation.”

“We enshrined in law the basic principle of our existence,” declared Israeli Prime Minister Benjamin Netanyahu, after the Knesset’s ratification of the bill, which passed by a vote of 62-55. In other words, the basic principle of Israel’s existence is to maintain Jewish supremacy over all others and to colonize as much Palestinian land as possible; and he is proud to have institutionalized this bigotry into a formal law.

One might wonder why, after 70 years since its establishment, the “democratic” state of Israel has never implemented a constitution. The answer is likely that it is for the same reason why it never defined its borders: So that it can keep its options open to expand its domination over the indigenous Palestinian population.

In a typical constitutional democracy, the equality and rights of minorities would need to be enshrined in its constitution. Israel’s declaration of independence stated that the country would be based on the “equality of social and political rights to all its inhabitants irrespective of religion, race or sex”, but by the Knesset’s own admission, this declaration is “neither a law or an ordinary legal document.” Therefore, avoiding the adoption of a constitution would avoid formalizing any substantive rights for Palestinians.

Unsurprisingly, none of the “Basic Laws” explicitly touch on the rights of the Palestinian minority. Even the “Human Dignity and Liberty” basic law passed in 1992 only vaguely addresses issues of human rights and definitely not with respect to the Palestinians, who became second-class citizens after 1948. It certainly does nothing to address the question of the 4.5 million Palestinian living either under occupation in the West Bank and Jerusalem, or under total siege in Gaza. All these people are not Israeli citizens — on the contrary, they are stateless — and they have almost no rights, whatsoever. These Palestinians are subjected to harsh Israeli military rule and they can do nothing about it.

Despite this outrageously prejudiced “nation-state” basic law, Israel and its propagandists whine about and become extremely offended by the assertion that it is an Apartheid state. But the statements of its own leaders and politicians all but prove the reality that Israel is an intolerant and discriminatory state.

Take, for example, the words of Israel’s leader, Benjamin Netanyahu. During discussions of the law, he claimed that Israel is “the only country in the Middle East that honors equal rights.” He then proceeded to say, “I reiterate this is our country, the country of the Jewish nation.” The contradiction is glaring, yet most of the mainstream media fails to point it out. If an American president said that the U.S. honors equal rights, followed by a statement that the U.S. is a country that belongs to the Christian people, it would cause an uproar.

Another Israeli politician from the right-wing Likud party, MK Avi Dichter, is even more direct in his prejudice.

“We are enshrining this important bill into a law today to prevent even the slightest thought, let alone attempt, to transform Israel to a country of all its citizens,” he said.

To his credit, at least he is honest about his views. Again, the bigotry of the Israeli state is not the opinion of Palestinians. It is a matter of fact and the words of Israel’s own leaders prove this without a doubt.

In the 62-55 vote in the Knesset, 13 of the 55 members who voted against this law are from the Joint List, which is an alliance of four parties that represent the Palestinian citizens of Israel. That leaves 42 Israeli members who voted against the law. Therefore, it can be reasonably estimated that at least 60 percent of the Israeli electorate (62/104) is in favor of such discriminatory policies favoring Israeli Jews at the expense of Palestinians. Such a high number within Israeli society is troubling, to say the least.

Following the vote, Ahmed Tibi, a Palestinian lawmaker in the Knesset and member of the Joint List said, “I announce with shock and sorrow the death of democracy.” Ironically, he is incorrect. Democracy in Israel never died because it never existed in the first place. A true democracy would not have more than 50 discriminatory laws, many of which have been passed recently, favoring one group of its citizens (Jewish Israelis) over another (Palestinians). Until Israel gets rid of the prejudice that is inherent to its political system and plagues its society, it should not complain about being labeled as an Apartheid state.

Mohamed Mohamed is the executive director of The Jerusalem Fund & Palestine Center.

The views in this brief are those of the author and do not necessarily reflect those of The Jerusalem Fund.