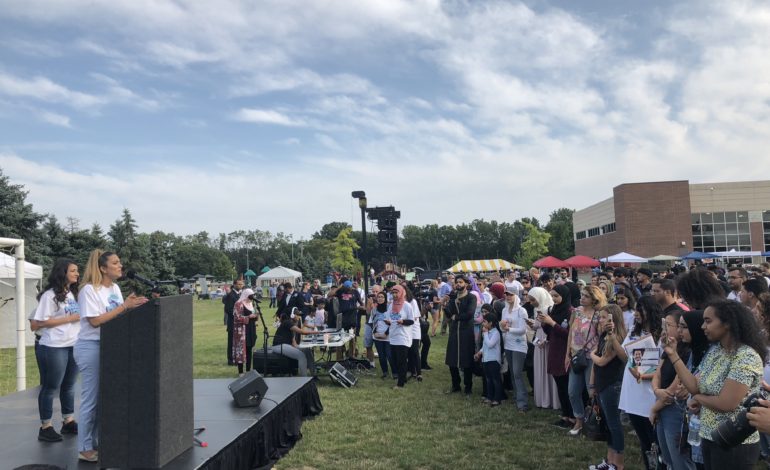 DEARBORN — Organizers at Sunday’s My Muslim Vote rally held outside the Ford Community and Performing Arts Center in Dearborn encouraged the Muslim community to participate in local and state elections.

Nada Al-Hanooti, executive director of the Michigan chapter of Emgage, an organization that encourages Muslims to vote and was a partnered organizer of the rally, said Emgage hopes to motivate Muslims to be involved.

“We’re trying to really mobilize the community through bringing them in with food, events and games and guest speakers,” she said. “What better time than now when we have all these great Muslim candidates.”

She added that the Muslim community is a minority one.

“We are being attacked and we are the ones dealing with these really harsh policies,” she said. “So, in order to change the system we have to be part of the system, we have to engage in our government.”

Al-Hanooti said the voter turnout for muslims is very low, both in Dearborn and elsewhere.

“It’s always been extremely low,” she said. “Not just with the muslims, but the immigrant community in general.”

Sumaiya Ahmed, executive director of the Michigan Muslim Community Council (MMCC), said candidates across all party lines in Michigan were invited to the My Muslim Vote rally.

“We invited all candidates across the board so they could come and meet their constituents,” Ahmed said.

She also said the event was created to encourage people in the Muslim community to make their voices heard.

“The incentive to start all of this was to get people out to vote,” she said.  “A lot of our community members are engaged, but they don’t always feel comfortable reaching out to someone or they don’t know how to get started. So we wanted to make it a one-stop shop. Bring your family and show your kids it’s important to meet the people who might become your representatives.”

Ahmed added that Emgage did a really good job of getting people to attend events in 2016.

“We saw an increase in people coming to events, but the poll numbers showed that they still weren’t coming out [to vote],” she said.

Ahmed also said that the MMCC and other organizations will help voters get to the voting booths by sending buses to communities or by driving them to their polling locations on the Aug. 7 primary and Nov. 6 general Election Days.

“This is just one step forward,” she said. “We have a lot of work ahead of us; and this is just getting people together and letting them know the work to be done and how important it is to be involved.”

Dawud Walid, executive director of the Michigan chapter of the Council on American-Islamic Relations (CAIR-MI), one of the many sponsors of the My Muslim Vote rally, explained why he thinks encouraging Muslims to vote is especially important this year.

“The status of civil rights in America in general, especially for Muslims, is in peril under this current administration and the environment it’s in,” he said. “This community needs to come out in large numbers to vote according to our values for justice and equity in this country. When we look at issues such as being adverse to DACA and immigrant rights and in support of the Muslim ban, those politicians who support those policies are overwhelmingly in the Republican Party.”

Many elected officials came to the rally Sunday in support of the Muslim community, and to talk with  their constituents.

“It’s my community, it’s where I live,” she said. “I’ve fought for this community long before I ever got elected to Congress.”

She said she thinks too many people don’t know the importance of coming out to vote.

“I’m not telling anybody how to vote today,” she said. “I’m telling them it matters; their vote matters.”

Dingell cited a threatening climate toward immigrants, created by the Trump administration, for the Muslim community’s disengagement from politics.

“I think they become afraid or intimidated,” she said. “In this political climate they’re afraid someone is going to knock on their door.”

“The Muslim vote should be important to everybody,” said Dr. Abdul El-Sayed, a Democratic candidate for governor of Michigan and one of the headlining speakers at the event. “And everyone should be working for it. I hope that I can earn it because my policies are what is best for all people and because I come, I show up and I listen.”

El-Sayed said that Muslim community members have to make their voices heard and that his critics in the community should pay attention to his policies.

“You’re always going to have criticism, right?” he said. “I think people have to vote in their best interest. If they believe my focus on healthcare, rebuilding our roads, making sure we bring down auto insurance [prices] and my focus on public schools is wrong, then they should not vote for me.”

Alexandria Ocasio-Cortez, a New York Congressional candidate, campaigning in Michigan with El-Sayed, told the crowd that the key to shifting political power is by encouraging others to vote.

“The future needs you and they need us to express ourselves and own ourselves, fully completely, presently as we are,”  she said. “The only way that we can make change for us is to expand the electorate.”