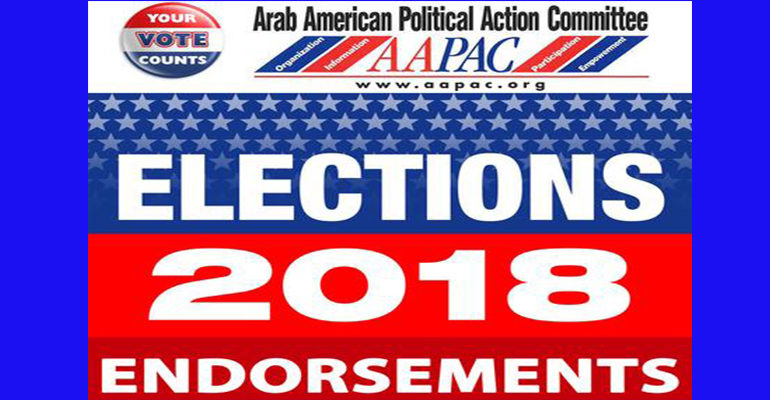 DEARBORN – Several key races are brewing that could alter the course municipalities and the state take as they face challenges like improving public education, fixing dilapidated infrastructure and lowering insurance premiums.

After interviews and deliberations on August 1, The Arab American Political Action Committee (AAPAC) endorsed candidates for state representative, state senator, Wayne County executive and a judge on the Wayne County Probate Court. Its members sought to give young and new candidates an opportunity to bring about change and to bring Arab American issues to the table in local and state governmental institutions.

Formed in 1998, AAPAC’s membership consists of Arab American professionals who volunteer their time and donate their hard-earned money to organize and encourage Arab American political engagement. According to AAPAC’s bylaws, members may only consider candidates who’ve requested an endorsement from the organization in writing. Those who’ve already been interviewed for consideration during past elections don’t necessarily need to undergo second evaluations. However, candidates need to get the nod of approval by two thirds of the members in good standing who are voting on the endorsements in order to get the organization’s support.

Cherry, a Democrat, is a small business owner from Flint who prioritizes strengthening the middle class, infrastructure repairs and affordable public education. He founded the Flint Coffee Company with his wife in 2013 and served as vice chair of the Flint Charter Commissioner in 2015. The charter put in place new provisions concerning ethics, accountability, transparency and public involvement.

Aiyash is a Yemeni American and a product of Hamtramck Public Schools. He made history as the youngest member of a city commission in Hamtramck. He also co-founded a non-profit that promotes literacy in poor and working class communities in Detroit and Flint and launched a mentoring program for refugee children.

In July 2009, then-Mayor Dave Bing appointed him Detroit’s police chief, a job he held for one year. In February of that year, he’d run in the special mayoral election caused by Kwame Kilpatrick’s resignation.

He was elected Wayne County executive in 2014.

For a seat on the Wayne County Probate Court, AAPAC endorsed David Perkins, who is currently a judge in the 36th District Court in Detroit.

Before his appointment to the 36th District Court, Perkins served as the court referee for the Third Circuit Court’s Family Division. He also previously served as a magistrate for the 30th District Court, as an assistant corporate counsel for Wayne County and as a judge advocate in the Michigan Air National Guard. Perkins also worked as an attorney in his own private practice and was a partner at the Law Offices of Dozier, Turner, Braceful & Perkins.