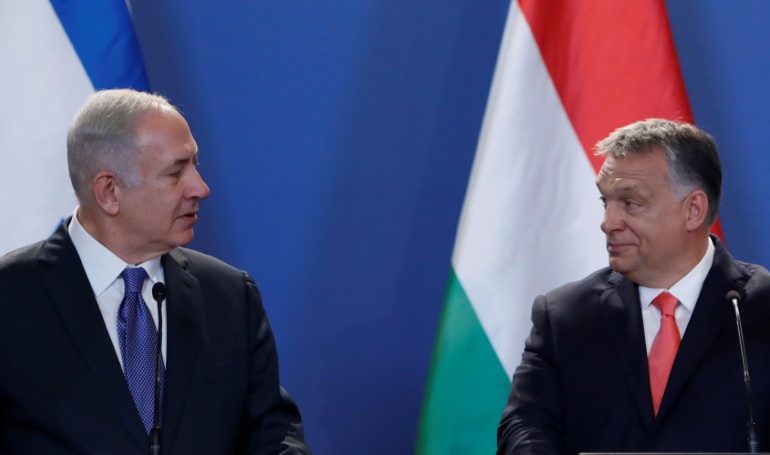 Hungarian Prime Minister Viktor Orban visited Israel on July 19, where he met Israeli Prime Minister Benjamin Netanyahu and other officials. Orban’s visit would have not required much pause except that the Hungarian leader has been repeatedly branded for his often racist, anti-Semitic remarks.

So why is Orban wining and dining with the leaders of the so-called “Jewish State”?

The answer does not pertain only to Orban and Hungary, but to Israel’s attitude towards the rapidly growing far-right movements in Europe, as a whole. Netanyahu and Zionist leaders everywhere, are not just aware of this massive political shift in European politics but are, in fact, working diligently to utilize it in Israel’s favor.

On his visit to Israel, Orban asserted that Hungarian Jewish citizens should feel safe in his country, an odd statement considering that it was Orban and his party that deprived many Jews and other members of minority groups of any feeling of safety.

Still, Netanyahu has welcomed Orban as a “true friend of Israel” and Orban called on his European counterparts to show more support for Israel. Mission accomplished.

Netanyahu had visited Budapest in July 2017, but that supposedly “historic” visit did nothing to change Hungary’s official discourse, dotted with racism and anti-Semitism. In fact, in March 2018, Orban derided Jews, focusing his criticism mostly on Jewish financiers such as George Soros.

At an election rally campaign, Orban said, “We are fighting an enemy that is different from us. Not open but hiding; not straightforward but crafty; not honest but base; not national but international; does not believe in working but speculates with money; does not have its own homeland, but feels it owns the whole world.”

It is well-known that Israel and Zionist leaders are quite selective in manipulating the definition of “anti-Semitism” to serve their political agendas, but Israel’s attitude towards the racist far-right movements in Europe takes this truth to a whole new level.

Indeed, the “special relationship” between Netanyahu and Orban is only the tip of the iceberg. For years, Netanyahu’s Israel has been “flirting” with radical right movements in Europe.

The unmistakable Israeli strategy, of course, has its own logic. Israeli leaders feel that Europe’s move to the far-right is irrevocable and are keen to benefit from the anti-Muslim sentiment that accompanies this shift as much as possible.

Moreover, the EU’s resolve to label illegal settlement products and refusal to heed calls for moving their embassies from Tel Aviv to Jerusalem is pushing Netanyahu to explore these new routes.

During his previous visit to Hungary, Netanyahu met with leaders from the so-called Visegrad-4, which includes Hungary, Poland, the Czech Republic and Slovakia.

On that visit, Netanyahu hoped to find new channels of support within the EU, through exerting pressure by using his new-found allies in these countries. In an audio recording obtained by Reuters, Netanyahu chastised Europe for daring to criticize Israel’s dismal human rights record, illegal settlement policies and military occupation.

“I think Europe has to decide whether it wants to live and thrive or it wants to shrivel and disappear,” he said.

Netanyahu’s arrogance is unbridled, especially as the censure is emanating from a leader who represents an ethno-nationalist state, which has just recently canceled any reference to “democracy” in its newly-issued Jewish nation-state law.

The new “basic law” defines Israel by an ethnic identity, not any democratic values. Netanyahu is now closer to Europe’s far-right racist groups than to any liberal democratic model, thus the ongoing flirting between Israel and these groups.

In fact, the term “flirting” is itself an understatement considering that Israel’s ties with various far-right, neo-Nazi and fascist parties in Europe involve high-level political coordination and, in the case of the Ukraine in particular, the actual supplying of weapons.

The Israeli-far-right embrace almost touches every single European country, including Italy and Germany, whose history of Nazism and Fascism has wrought death and misery to millions.

In Italy, the connection between Italian far-right parties and Israel goes back to the early 2000s, when post-Fascist leader Gianfranco Fini labored to rebrand his movement.

Initially, Fini was the leader of the Movimento Sociale Italiano (Italian Social Movement), which saw itself as the “heir to the Fascist Party.”

The rebranding of the party required a trip by Fini to Israel in 2003, after changing the name of his movement to the “National Alliance.” Interestingly, in his highly-touted visit, Fini was accompanied by Amos Luzzatto, the head of the Italian Jewish community.

Unsurprisingly, far-right leader Matteo Salvini, Italy’s current interior minister, went through the same political baptism by Zionist Israel — as Orban and Fini also did — by paying a visit to Tel Aviv in March 2016 to launch his political career and declaring his undying love for the Jewish State.

The same scenario is being repeated in Germany, where the far-right party — Alternative for Germany (AfD) — has risen in ranks to the point that it nearly toppled a government coalition led by Chancellor Angela Merkel.

AfD has more in common with Israel than the common anti-Muslim and anti-immigrant views. The party, which is “derided for anti-Semitic, xenophobic views redolent of the Nazis, is also staunchly supportive of Israel,” reported the Times of Israel.

Last April, the anti-Muslim, anti-Semitic German party enthusiastically began a campaign pushing for the recognition of Jerusalem as Israel’s capital, despite Merkel’s views to the contrary.

The story, however, does not end there. What began as Israeli flirting with far-right racist movements is now Israel’s official policy towards Europe. The same story, with different actors and names, can be found in Austria’s Freedom Party (FPOe), Belgium’s Vlaams Belang (Flemish Interest) and virtually everywhere else.

It remains to be seen how Israel’s embrace of fascist Europe will bode, both for Israel and the European Union. Will the EU “shrivel and disappear”, or will Israel be finally exposed for what it truly is, an ethno-nationalist state with no interest in true democracy in the first place?

Ramzy Baroud is a journalist, author and editor of Palestine Chronicle.