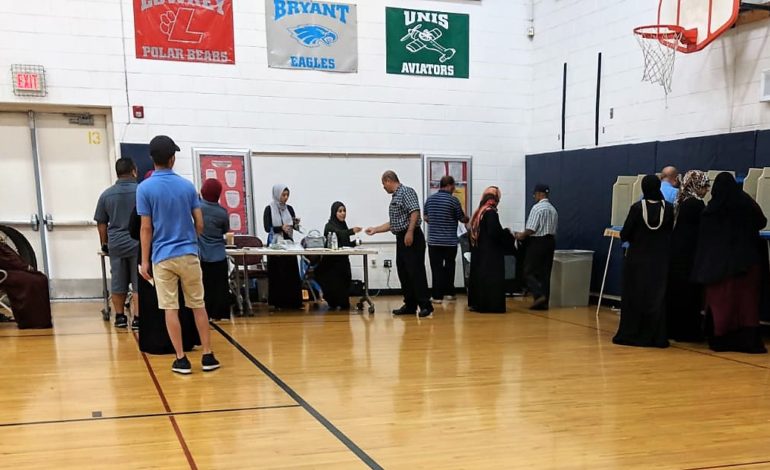 Voters waiting in line to cast their ballots at a precinct at Snow Elementary School in Dearborn, August 7 - The AANews

DEARBORN— About 2.1 million people out of 7.4 million registered cast their votes in Michigan in the Aug. 7 primaries, with a nearly 28.6 percent voter turnout breaking records going as far back as 1978, according to state election officials.

The results of Michigan’s gubernatorial race mirrored most polls that had former State Senator Gretchen Whitmer winning the Democratic primary and going up against the Republican Bill Schuette, the state’s attorney general, in the November 6 general election.

About 53 percent of Michigan voters chose a Democratic candidate and 46.5 percent voted for Republican candidates.

In Dearborn, the total voter turnout was 34.4 percent, which was about 5 percent higher than the state’s turnout. That’s also significantly higher than turn outs in primary elections in 2012 (25.2 percent), 2014 (17.5 percent) and in the 2016 presidential primary election (24.8 percent).

In Dearborn, nearly 24 percent of people voted in the Republican gubernatorial race, while 73 percent voted in the Democratic race.

In Dearborn’s east and Southend precincts, where a high concentration of Arab Americans reside, about 29.8 percent of registered voters headed to the polls, voting heavily Democratic and for El-Sayed.

At McDonald Middle School (Precincts 1 and 2), about 25.5 percent of 2,886 registered voters turned out on Election Day. Nearly 83 percent of them voted for El-Sayed, while 7.5 percent chose Whitmer.

At Lowrey Elementary School (Precinct 7), 26.7 percent of 1,864 registered residents voted. About 78.3 percent of those chose El-Sayed, while 6.8 percent voted for Whitmer.

At Snow Elementary School (Precincts 25 and 26), 37.3 percent of 3,120 registered voters headed to the polls. El-Sayed and Whitmer each received nearly 27 percent of the votes.

At First Presbyterian Church (Precincts 31 and 32), about 42 percent of 2,753 registered voters went out to the polls. Super Tuesday: Michigan now a “must win” for Sanders campaign after stunning comeback by Biden