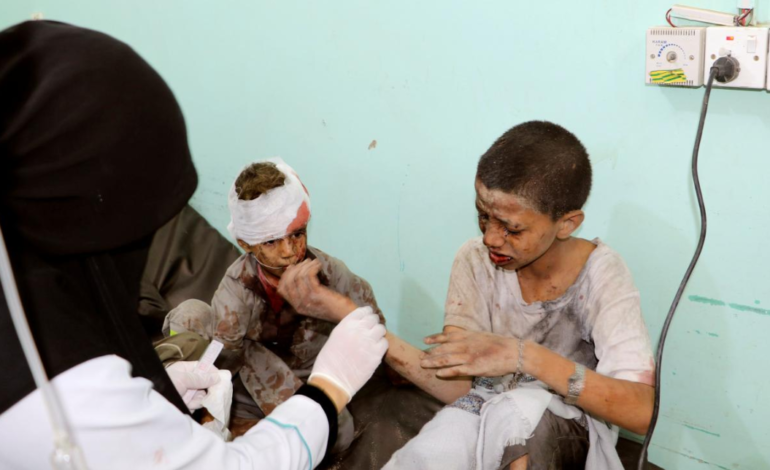 ADEN — Saudi-led coalition air strikes on Thursday killed dozens of people, including children traveling on a bus through a market, in Yemen’s Saada province, a Yemeni health official and the International Committee of the Red Cross (ICRC) said.

The Western-backed alliance fighting the Houthi Yemeni group said in a statement that the air strikes targeted missile launchers used to attack the southern Saudi city of Jizan on Wednesday, killing a Yemeni civilian there.

It accused the Houthis of using children as human shields and said the strikes were carried out in accordance with “international humanitarian law.”

Houthi spokesman Mohammed Abdul-Salam said the coalition showed “clear disregard for civilian life” as the attack had targeted a crowded public place in the city.

The ICRC said a strike hit the bus driving children in Dahyan market, in northern Saada.

“Our shops were open and shoppers were walking around as usual,” witness Moussa Abdullah, who was being treated in hospital for wounds, told Reuters. “All of those who died were residents, children and shop owners.”

The ICRC said on its Twitter account that its medical team at the ICRC-supported hospital in Saada had received the bodies of 29 children, all under 15-years-old. The hospital also received 48 wounded people, among them 30 children.

That was the toll at just one hospital. A Yemeni man holds a boy who was injured by an airstrike in Saada, Yemen August 9, 2018.:REUTERS

“A bus carrying children was targeted today while they were coming from summer school, resulting in 43 martyrs and almost 63 wounded,” Abdul-Ghani Sareeh of the Saada health department told Reuters.

White plastic body bags filled the floor of a room in the ICRC-supported hospital.

Injured children, bloodied, bandaged and screaming, lay on stretchers as doctors treated them, friends and relatives having carried some of them in their arms to be treated.

“Scores killed, even more injured, most under the age of 10,” Johannes Bruwer, head of the delegation for the ICRC in Yemen, said earlier in a Twitter post.

It was unclear how many of the dead in total were children and how many air strikes were carried out in the area, in northern Yemen, near the border with Saudi Arabia.

Saudi Arabia and its allies intervened in Yemen’s war in 2015 against the Houthi Yemeni group, which controls the most populous areas of Yemen, including the capital Sanaa, and drove the the Hadi government into exile in 2014.

The United States and other Western powers provide arms and intelligence to the alliance, and human rights groups have criticized them over coalition air strikes that have killed hundreds of civilians at hospitals, schools and markets.

The World Health Organization (WHO) representative in Yemen, Nevio Zagaria, said it has deployed emergency supplies.

“I am extremely saddened by what happened in Saada,” Zagaria said “…The attack on civilians is not acceptable.”

The alliance says it does not intentionally target civilians and has set up a committee to probe alleged mass casualty air strikes, which has mostly cleared the coalition of any blame.

Today’s attack in Saada was a legitimate military operation … and was carried out in accordance with international humanitarian law,” the coalition said in the Arabic language statement carried by SPA.

A U.S. State Department spokeswoman said the United States was concerned about reports of the air strikes and urged the Saudi-led coalition to investigate.

“U.S. Central Command was not involved in the air strike in Saada,” a U.S. military spokeswoman said, adding that its last air strike in Yemen was July 24 against Al Qaeda in the Arabian Peninsula.

The Houthis have launched a series of missile strikes on Saudi Arabia, including Riyadh, over the past year.

Saada, the main stronghold of the Houthis, has mainly come under air strikes from the coalition as the mountainous province makes battles hard for pro-government ground troops.

The Yemen war has killed more than 10,000 people, displaced more than 2 million and driven the country to the verge of famine, according to the United Nations.