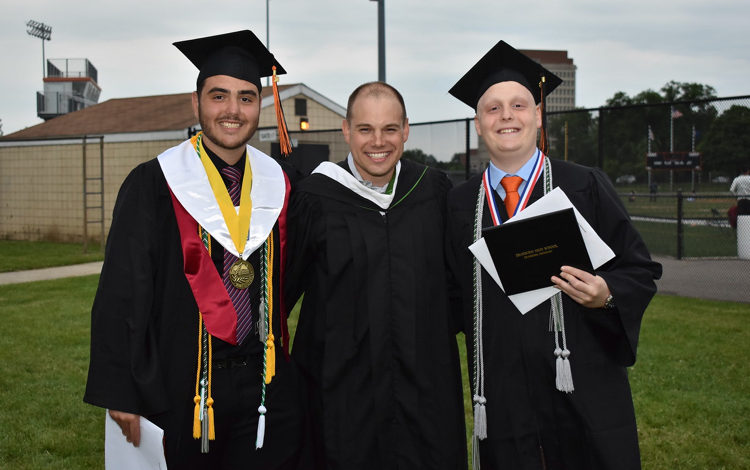 DEARBORN – Not even a life-threatening disease could stop Mohamad Osman in his tracks.

It did for only a brief period, shortly after he noticed he was running slower than his usual pace while running cross country and track during his senior year at Dearborn High School in September 2017.

A blood test at Henry Ford Hospital’s emergency room revealed that while his heart was beating just fine, his organs were receiving little to no oxygen and inflammation was spreading throughout his body. Osman was diagnosed with stage four Non-Hodgkin Lymphoma. The cancer already spread past his lymph nodes to his bone marrow, so his body couldn’t produce blood cells that carry oxygen and fight infection.

Treatment, including chemotherapy every three weeks, takes a heavy toll on patients, especially for an 18-year-old runner who aspires to be a dentist. But with the power of support, Osman’s been able to extinguish weakness to excel academically and spark inspiration.

Despite his illness, Osman graduated with a 3.8 cumulative GPA and a 4.5 GPA in his last semester, while taking dual enrollment courses at Henry Ford College – a difficult feat even for most physically well students.

His personal drive to overcome the cancer is unwavering, but finds it hard to believe he could’ve graduated on time without a strong network of support and encouragement.

Osman’s twin brother, Ali, was invaluable in keeping his spirits high – helping him with every step along the way and constantly pushing him to maintain a social life.

“He keeps me motivated,”Osman said. “He’s the reason why I stay positive all the time.” Although cancer commonly puts most patients’ lives on hold, Ali Osman said his brother’s ability to look past the hardships and maintain his active life has inspired him, in return. His brother’s diagnosis was a “wake up call.”

“The moment he was diagnosed was hard on him, but he accepted it right away and said, ‘I’m still going to live my life,’” Ali said. “That stood out to me.”

As he stood by his brother’s side, Ali Osman graduated with a 4.5 GPA and was awarded five scholarships. He’ll be attending the University of Pennsylvania in the fall to pursue a dual-degree in international affairs and business management. He’s the only student from his school to be accepted into an ivy league university this year.

But Ali Osman was far from the only one rooting for his brother’s success and recovery. Numerous get-well letters that Mohamad Osman received regularly from his classmates and teachers assured him that he wasn’t alone.

Ali credited Robert Yoder, a teacher and advisor to the Business Professionals of America club, with which the brothers were heavily involved. Yoder was like “a second father” and would often advise him on how to support his ill brother.

They both also credited their academic advisor, Robin Thomas, who visited Mohamad at home every week for hours to help him stay on top of all his assignments and exams.

He also has two older sisters aged 22 and 20 and an 8-year-old brother who’ve helped him along the way.

Mohamad Osman experiences severe physical weakness, nausea and vomiting after a chemotherapy session and is expected to undergo a bone barrow transplant operation at the end of August. But even then, he is somewhat of a gym junkie, always running, biking and swimming. He also can’t wait to take online pre-dentistry courses at the University of Detroit Mercy and attend classes on campus during remission.

“But it’s all good,” he said of the therapy symptoms. “I don’t sit around all day.”